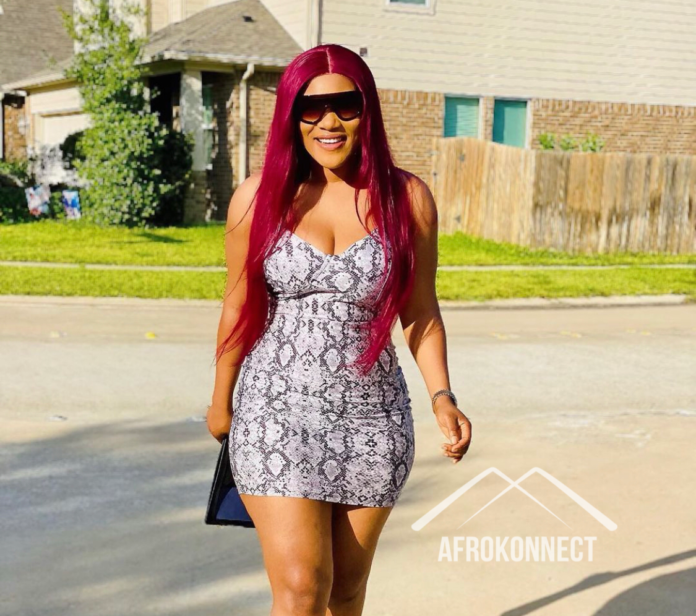 This article is about Mercy Macjoe Biography, Career info as well as Net Worth of the Actress & Filmmaker in 2022, all via Afrokonnect.

She is also the CEO and founder of Beauty by Macjoe.

On the 20th of June 1993 Mercy Ima Macjoe was born in Lagos State, Nigeria.

She became the 6th child of her parents, Although the actress hails from Akwa Ibom, she was raised in Lagos State.

Her father was a soldier but later died when she was still a child,

Unfortunately she didn’t had a chance to spend time with her father,

She was raised by a strong single mother and that helped her while growing up, her mother literally raised her to adulthood.

While growing up Mercy had her Nursery, Primary, Secondary, and University education in Lagos State, Nigeria.

She has a degree in Mass Communication from the National Open University (NOUN).

Mercy Macjoe recently enrolled at the New York Film Academy to hone her skills as a filmmaker.

Her career I’m the Nollywood started as far back as in 2011,

She premiered with the Grace Movie’s Lonely Princess.

However, it was the movie “Sugar Pot” that brought her to limelight in the industry.

Mercy is in love with her profession because it allows her to express someone else’s emotions.

According to her Acting is her passion, it is one of the things she loves doing even before the spotlight,

She also added by saying Her mum had always been in support of her career choice.

Her mother was the one that usually encouraged Mercy to attend talent competitions,

She used to give her transport fares to attend auditions and encourage her always,

That has really helped in shaping Mercy and her attitude towards her career,

Mercy is usually selective of movies she stars in especially movies that contains adult,

One of the reasons is because she is building a brand for herself,

and she has people who are looking up to her as a role model.

In the Interview below Mercy Macjoe clearly stated that not even a 100 million Dollar can make her act Nude;

The award-winning actress has featured in couple of movies over the years, including:

As a producer, Mercy released her first debut movie Red in 2018.

Thus far, she has produced several other movies including, 30 and Single, Love in a Puff, and Passion’s Promise, all under the umbrella of her production company, MM Joe Film Productions.

While we’re still on the Mercy Macjoe Biography, let’s take a look at her Filmography.

I once hawked oranges on the streets to survive, Mercy Macjoe Claimed.

In a brief digital interview mercy had with Vanguard,

she was able to answer few questions about her personal life and experiences:

Mercy said; I didn’t have all the opportunities when I was growing up.

I grew up with my mum, I lost my dad at a very young age so it was just my mum who took care of me and my other siblings.

She said, I am the sixth in a family of eight, I wasn’t born with a silver spoon in my mouth; I had to do so many things to survive.

I assisted my mum in her buying and selling business, I sold so many things with my mum.

Mercy Macjoe added; I remember selling oranges and some other things with my mum.

Am proud to say it now because the story is different now.

Yes, I hawked oranges and some other things, helping my mum and siblings to survive,

According to her “ I am always proud to say it because it was in the past and I can’t sell oranges now ”.

“Win in silence, let them think you are losing.”

“Don’t give up! The beginning is always the hardest.”

“I love who I have BEEN, but, I really love who I’m BECOMING.”

“We live in a time where no dream is too big as long as you pursue it.”

Through her journey and career Mercy has always wanted to librate people,

She always wants to motivate her fans, Viewers and also impact peoples lives in any ways she can,

One of her core values to achieve that is “Work Hard”.

Mercy Macjoe worked hard to attain the height she has achieved today,

She didn’t sit there and expect fame to walk down to her,

Mercy put in all the necessary work and went further to acquire more training to hone her skills to become a pro filmmaker.

She isn’t only an actress, but also an entrepreneur making waves in her industry,

Another evidence that hard Work pays when you do it smartly,

She encouraged every entrepreneur work hard, You can’t have a lackadaisical attitude towards work and expect success.

Remember, 1001 other people in your industry are doing serious hard work.

Mercy Macjoe Net Worth in 2023

Her life wasn’t always about Wealth, Before the richest she had to work for it and today she’s among the richest female actresses in Nigeria.

Mercy Macjoe has an estimated net worth of 40 Million Naira, which is approximately around $89,107.

ALSO CHECK OUT:- Bonang Matheba Biography, Lifestyle and Net Worth

Mercy Macjoe Biography, Career info as well as Net Worth of the Actress & Filmmaker in 2023, all via Afrokonnect.

7 Best Crypto-Friendly Banks to Use for any Transaction

Temi Otedola Net Worth in 2023, Relationship and Biography

5 best cryptos for moderate earners in 2023