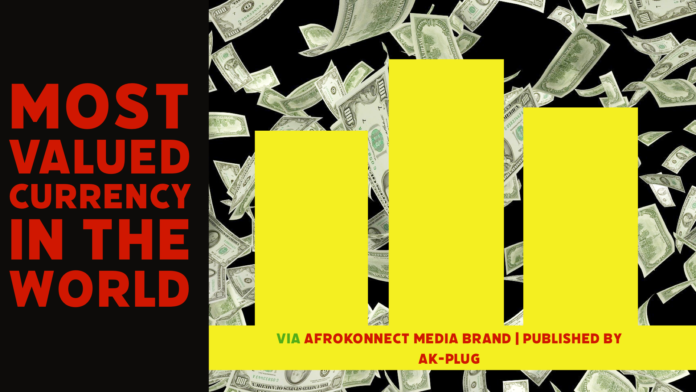 Top 10 most valued currency in The World, most Valuable currency and highest currencies at the moment via Afrokonnect,

With currency value fluctuations happening all over the world,

It is important to know the most valuable currencies in the world,

This would give you an insight to the right places to store or invest your money and avoid inflation.

Without further ado, let’s start with the most valuable currency in the world and give you a quick breakdown;

The CAD is the official currency of Canada and like the USD,

The CAD is also used by Saint Pierre and Miquelon,

It is the 5th most held reserve currency in the world and it is popular because of the economic soundness and financial stability Canada has.

This makes it number 10 on the world’s strongest currency list at the moment.

9. United State Dollar (USD) – Most Valued Currencies in the World

That is if you go by the Central Bank of Nigeria conversion rate,

Of course, it is more than that if you are converting your USD in the black market (bureau de change),

USD is the official currency of the United States and its territories,

It is divided into 100 units called cent/penny,

At the moment the USD is the most used currency in transactions round the world,

More so, USD plays a very important role in the global economy and in the world’s foreign exchange,

It is also recognised as the world’s most stable currency and it’s value compared to other currencies puts it at number 9 on the world’s strongest currency.

Most Valued Currency in the World in 2023

Switzerland is bordered to the North by Germany, to the east by Austria and Lichtenstein, south by Italy and west by France,

While Lichtenstein is located in between Switzerland and Austria.

The CHF is the 7th most traded currency in the world and 8th on the list of the strongest currency world.

The CHF is such a strong currency because it is a financial refuge as there is stability in the Swiss government and financial system.

Also, the Switzerland economy is heavily dependent on exports and tourism.

Launched on the January 1st in 1999, the European euro with the code EUR is the official currency of 19 out of 27 member states of the European Union,

These group of states are called the EUROZONE or the EURO AREA.

1 EUR is currently equivalent to 1.14 USD which is also equivalent to 476.89 NGN making it 7th most Valued Currencies in the World in this list.

At the moment the European euro is the 2nd most traded currency behind the US dollar.

6. Cayman Islands Dollar (KYD) – Most Valued Currency in the World

The Cayman Islands Dollar was introduced in 1972,

It became the official currency of the Cayman Islands after replacing the Jamaican dollar.

The Cayman Islands is a country located south of Cuba and has three major islands called Cayman brac, Grand Cayman and Littld Cayman.

The country is regarded as a tax haven as the government does not impose corporate income tax on businesses,

But instead they generate revenue through financial transactions, import duties, work permit fees, tourism and so on.

The Cayman Islands dollar with the code KYD is subdivided into 100 cents and there are coins of 1, 5, 10 and 25 cents,

Currently, 1KYD = 1.2USD and around 500.10 NGN positioning the Cayman Islands dollar as number 6 on the highest currency in the world list.

It is the official currency of the United Kingdom (UK), Jersey, Guernsey, Gibraltar, British Antarctic Territory and some other countries,

It was first created as a form of money in the year 760 but only became official in the UK in 1707.

The British pound sterling with the code GBP is regarded as the most aged currency that is still accepted as a legal tender,

It is also the 4th most traded currency in the foreign exchange system behind the US dollar, the European euro and the Japanese yen,

In addition to this, it is the 4th most held currency in global reserves.

This makes the British pound sterling number 5 on our list of valuable currency in the world at the moment.

Note that the British pound sterling is also nicknamed “quid” or simply “Sterling”.

MUST READ: Everything you need to know about Nigerian Digital currency eNaira.

Highest Value Currency – Most Valued Currency in the world in 2023

The Jordanian dinar has been the official currency of Jordan ever since it was introduced in 1950,

Jordan is an Arab nation located on the east bank of the Jordan River,

It is recognised as a country with upper middle class income.

The country is bordered on the east and south by Saudi Arabia, to the west by the dead sea, to the north east by Iraq and by Syria to the North.

Not only is the Jordanian dinar the official currency for Jordan, it is also used with the Israeli shekel in the Well Bank,

The Jordanian dinar with code JOD is divided into 10 dirhams, 100 quirsh also called piastres or 1000 fulus,

Ranking the Jordanian dinar number 4 among currencies worth the most in the world.

It is such an expensive currency because the Jordanian government maintains a fixed exchange rate,

This means that it is pegged to the USD to create a stable financial system,

For that reason, JOD is today one of the Most Valuable currency in the world.

3. Omani Rial (OMR) – Most Valued Currency in the World

When you talk about Most Valuable currency, Omani Rial cannot be left out,

The OmanI Rial was first introduced in 1973, it is an Arabian currency that is the official currency of Oman,

Oman is a country located on the south eastern coast of the Arabian peninsula.

It has an economy pegged in oil prices and this is why the Omani Rial is the third highest value currency in the world,

The Omani Rial with the code OMR was originally called “Rial Saudi”,

Though it was changed in the year 1973 following a simultaneous change in regime and country name.

It saw a rise in value due to the oil the country exports to other countries, particularly the United State of America,

It is important to note that despite having a strong currency, Oman does not really have a strong economy due to it’s heavy dependency on oil,

However, attempts are being made to diversify the country’s economy.

The Bahraini dinar is the the official currency for Bahrain,

The country is bordered by Saudi Arabia to the west and the Qatar Peninsula to the east,

Also, the Bahraini dinar with code BHD was established in 1965,

Just like the Kuwaiti dinar, it is also sub-divided into 1000 fils,

One bahraini dinar is equivalent to 2.65 US Dollars and around 1,102.86 Nigerian naira.

The Bahraini dinar is the second most valued currency due to Bahrain’s dependency on it’s oil and gas sector,

With refined petroleum as it’s largest export and sources of revenue,

More so, the country has also invested heavily in the banking and tourism sectors,

It is no surprise that the BHD is among the Most Valued Currencies in the World at the moment.

World’s Strongest and Most Valuable currency in 2023 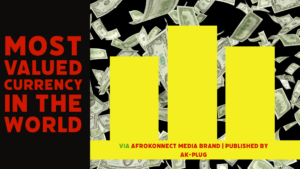 1. Kuwaiti Dinar (KWD) is the Most Valuable currency in 2023

The Kuwaiti Dinar with code KWD is the official currency of Kuwait,

Geographically, Kuwait is a small country nestled in between Saudi Arabia to the south and Iraq to the north,

The country is found on the north-western shore of the Persian Gulf.

Kuwait covers an area of about 17,820 square kilometres and has a population of over 3.5 million,

Additionally, Kuwait is a tax-free country and the fifth richest country in the world.

The kuwait dinar was introduced in 1960 and initially was equivalent to one pound sterling,

The currency is subdivided into 1000 sub-units called fils.

Kuwait as a country, is one of the largest global exporters of oil with large oil reserves throughtout the country and the strenght of the Kuwait dinar can be attributed to this.

What currency is worth the most in 2023?

The video below is about currencies worth the most in terms of value in 2023, watch and enjoy;

Above is a list of Highest Currencies in the world according to their Conversion rate and trading value.

Conclusion: Most Valued Currencies in the World

Though we try to bring you credible, accurate information and updates,

It is important to note that currency value can change at anytime,

As such, the conversion rate in this article are not constant,

Any financial decision you are about to make is completely your own decision.

You can always check the current currency conversion rate via OANDA.

On that note, this brings us to the end of this article about Top 10 most valued currency in The World, most Valuable currency and highest currencies at the moment via Afrokonnect.

We hope you enjoyed this article.

Efya Net Worth in 2023, Biography, Education, Career and Philanthropy