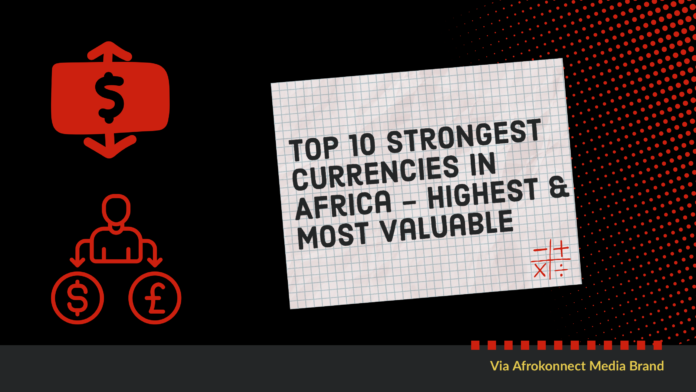 This article is about Strongest Currencies in Africa, a ranking of top 10 Highest and most valuable currency with high exchange rates against the Dollar in 2022 via Afrokonnect.

Is there a currency in Africa that can compete with the US dollar?

Well, today you’ll learn about the 10 most valuable currencies in Africa.

Because of it’s reputation for widespread poverty and pervasive corruption, rather than it’s technological prowess or high standard of living,

Africa is unlikely to have one of the world’s most robust currencies.

This list of the highest currencies in Africa reflects the fact that a number of African legal tenders are widely accepted on international currency exchanges.

Despite having the largest economy on the continent and the greatest nominal GDP,

Nigeria’s Naira is lower in value than dozens of other African currencies.

Despite the weakness of the naira, there are still ways to make money online in Nigeria that can be exchanged for other currencies.

10 Strongest Currencies in Africa – Highest & Most Valuable in 2022

The following are the top 10 most powerful currencies in Africa when compared to the United States Dollar:

The exchange rate for one US Dollar is equivalent to around 19.00 Egyptian Pounds.

Whenever you see the symbol E£, you know that you’re looking at the money of the Arab Republic of Egypt, where it’s used as legal tender.

The Egyptian pound was formerly pegged to precious metals;

However, beginning in 2001 the Egyptian Central Bank transitioned to a system of regulated floating,

Then in 2016 it completely abandoned pegs altogether.

In Egypt, one dollar was worth 8.8 pounds before the flotation,

As soon as it undocked, one dollar was about equivalent to about 15 Egyptian pounds.

Because of its widespread informal use in Sudan and the Gaza Strip,

The Egyptian pound is currently among Africa’s most valuable currencies.

The selling of Treasuries and the safeguarding of the currency have benefited from the country having one of the highest real interest rates in the world,

But this has had the unintended consequence of discouraging borrowing.

Since Egypt has the continent’s second-largest nominal gross domestic output (behind Nigeria), the Egyptian Pound is also among the top currencies in Africa.

South Africa’s national currency, the South African Rand (ZAR) is one of the most valuable currency in Africa.

First introduced in February 1961, the rand maintained a stable value against the dollar until the end of apartheid.

Due to the increasing globalization of the South African economy, its worth has declined since then.

South Africa’s Rand benefits from its prominence as a reserve currency by being pegged to the currencies of many neighboring countries.

These countries include Lesotho, Namibia, and Swaziland.

Historically, gold has been South Africa’s most valuable export,

And this has led to a close relationship between the ZAR and the price of gold.

However, the rand continues to be vulnerable to international unpredictability,

Because of South Africa’s weak economy and volatile political landscape.

Before we continue, here are the top 10 Richest Countries In Africa based on GDP Per Capita.

The Zambian Kwacha (ZMW) comes in at number eight on our list of the most valuable currencies in Africa,

ZMW is the country’s official currency. It is issued by the Bank of Zambia,

And it is acknowledged as a valid form of money for all types of transactions.

Due to the fact that it is sensitive to inflation and has a tendency to be a highly unstable currency,

Currency speculators do not engage in substantial trading of it since it offers very little opportunity for profit to those who are interested in trading currencies.

Because Zambia is the country that produces the most copper in all of Africa,

It’s currency is subject to unpredictable behavior as a result of the gyrations of commodity prices on the international copper market.

After Zambia gained its independence in 1968 from the United Kingdom,

The country’s previous currency, the pound, was replaced with the kwacha.

‘Kwacha’ comes from a Nyanja term for ‘dawn,’ which is where the currency gets its name.

Many Zambians are in dire straits due, in part, to the kwacha’s uncontrollable inflation rate,

Which has not prevented the kwacha from rising to become one of Africa’s most valuable currencies.

However, those who get their wages only in ZMW may be unable to afford a wide variety of consumer goods and services that are produced in countries other than Zambia because of their restricted purchasing power.

Eritrea’s national currency, the Nakfa (Nfk), is widely regarded as one of the most valuable units of currency on the African continent.

The government’s decision to maintain a fixed exchange rate rather than allowing the currency to float has contributed to the country’s long-term stability.

As a consequence of the country’s transition to a market economy,

The Seychellois Rupee (SR) has become one of the strongest currencies in all of Africa.

A resurgence in the economy and the development of the agricultural, fishing, and light manufacturing sectors have all been made possible by foreign direct investment.

Because of this, the economy of Seychelles has become more diversified,

Thereby helping the Rupee rise to the position of sixth strongest currency in Africa.

SR is among Africa’s top currencies in part because its GDP per person is the greatest in the continent.

The Republic of the Seychelles holds the record for being the world’s smallest nation to have it’s own independent monetary policy.

Botswana Pula, sometimes abbreviated as BWP, has been the nation’s legal tender and one of the most valuable currency in Africa.

It has been in use since 1976, eleven years after the country declared independence from the British Empire.

Despite the fact that the BWP fell in value in 2005, it is still considered one of the strongest currencies in Africa,

In Setswana, the language spoken by the majority of the population of Botswana, the word pula literally translates to “rain.”

The BWP is one of the highest currencies in Africa since it has a strong economy and a relatively stable democracy.

A further plus is that it may be purchased on Africa’s largest stock exchange, making it a very attractive currency.

The Moroccan Dirham, abbreviated as “MAD,” is the country’s basic unit of legal money and the fourth most valuable currency in all of Africa.

Because it is not accepted outside of it’s own country,

This currency is unaffected by the ebb and flow of the market as a whole.

This money is used as the standard medium of exchange in the Western Sahara region.

MAD is not subject to any regulations, but it is illegal to export it due to a legal prohibition.

On October 17, 1959, under Abdallah Ibrahim’s presidency,

It was put into effect following the creation of Bank Al-Maghrib and the replacement of the Moroccan franc, that had been in circulation since 1921.

The MAD has consistently ranked among Africa’s most valuable currencies from the day it was introduced. 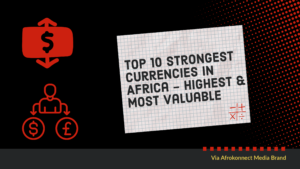 When converted to other currencies, the Ghana CEDI (GHS) ranks as Africa’s third-highest currency.

The GHS outperformed all other currencies in 2020 relative to the US dollar, citing a study by Bloomberg.

The United States government discovered that the value of the Ghanaian currency rose by 3.9%,

Which was the largest growth among the more than 140 currencies that were examined, placing it among the top in Africa.

The GHS is stronger as a result of Ghana having the greatest GDP per capita in West Africa,

A feat made possible by government spending programs and the expansion of employment opportunities.

The word “cedi” comes from the Akan language and refers to cowrie shells,

Which were once employed as a kind of currency in what is now Ghana.

The Libyan Dinar has a rate of 4.88 dinars to one dollar, making it the second most expensive currency in Africa.

When Muammar Gaddafi overthrew King Idris in a coup in 1971,

He replaced the Libyan pound with the LYD, which was initially issued at the same value.

The Libyan dinar is issued and managed by the Central Bank of Libya, and one dollar is equal to 4.88.

Despite the fact that it is still one of the top currencies in Africa,

The LYD has steadily lost value over the course of the years in comparison to other currencies such as the United States dollar, the British pound, and the euro.

Oil price drops on global markets have been the most significant factor in the currency’s sustained depreciation.

The drop in oil prices has hurt the Libyan dinar because oil exports are the country’s main source of foreign money.

Making it the most valuable currency in Africa at the moment.

It wasn’t until two years after Tunisia gained it’s independence from France that a new currency was issued,

And even then, the Tunisian franc was still in use.

Following the devaluation of the franc, the Tunisian dinar was tied to the United States dollar at a rate of 0.42 dinars to 1 dollar, and this rate remained in effect until 1971.

The Tunisian dinar’s ascension to the top of the rankings for African currencies can be attributed,

In part, to the historically low rate of inflation that the country experiences.

It experienced lower instability than neighboring oil-based countries Egypt and Morocco between 2000 and 2010.

Trading in or exchanging Dinars for foreign cash is now illegal by government decree.

Due to this restriction, the TND might be considered one of the strongest African currencies.

Congratulations you’ve made it to the end of this article. If you’re traveling to Africa for vacation then here are 10 Best Travel Destinations to visit in Africa.

I hope you found what you were looking for in this article. Good luck

Get Free 1GB on Airtel NG and Vodafone GH

6lack Biography, net worth and 5 Facts You Must Know About The Rapper

Kcee net worth, Endorsement and Biography 2022