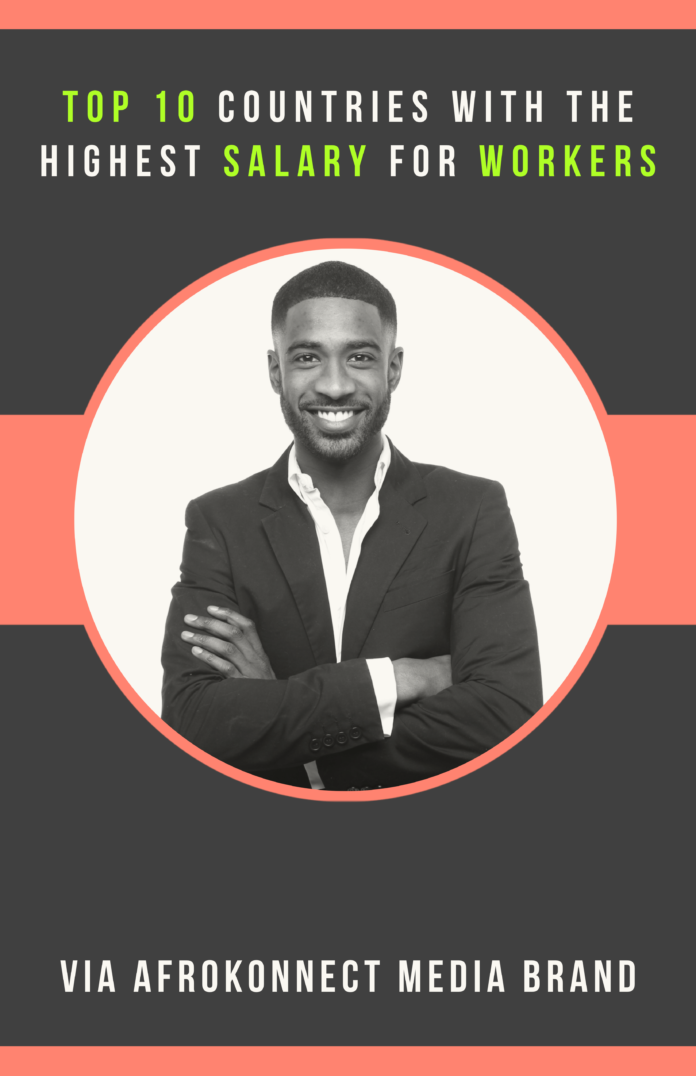 Welcome to this article about top 10 Countries with the Highest Salary for Workers in the world in 2023 via Afrokonnect.

Employers who are astute understand that in order to retain quality workers, it is necessary to provide the appropriate wage and benefits package.

Wages, salaries, bonuses, and commissions are all components of an employee’s total compensation package.

The salary incentive or wage is one of the most important considerations when deciding whether or not to accept a job offer or to continue working at a given position.

This article presents a ranking of the top ten countries around the world in terms of the average annual salary.

You have arrived to the right location if you are a graduate who is looking for opportunities,

Start by looking at 10 Most In-Demand Jobs in New Zealand for Foreigners.

Countries with Highest Salary and Minimum wage for Workers in the world – Per Hour, Weekly & Monthly 2023

The World Bank divides countries into four distinct groups based on their level of income:

At least $12,476 in Gross National Income (GNI) is required for a person to be considered part of the highest-income group.

The gross national income per capita of the lower-middle income nations ranges from $1,026 to $4,035.

Low-income countries are those that have a gross national income per capita of $1,025 or less.

Sadly, the majority of the countries with the lowest incomes are located in Africa.

According to the World Bank there are 77 countries and territories that fall into the category of high-income countries.

This article focuses primarily on the top 10 nations that offer it’s employees the highest pay,

As well as the finest overall salary and benefits package. So let’s dive in.

The banking industry, the steel industry, and industrial production all play a significant role in the economy of this country.

The gross domestic product that is produced by each individual resident in Luxembourg is the highest in the world (CIA 2018 est.).

With a population of 632,000, Luxembourg is one of the world’s wealthiest and highest-paying countries.

The economy of Luxembourg is relatively comparable to that of Germany,

It enjoys a degree of economic prosperity that is extremely uncommon among industrialized democracies.

The average wage of a worker in Luxembourg is approximately $68,681, making it the highest in the world.

The level of consumption by the government is lower than in the other Nordic nations.

Hydroelectric power is Iceland’s principal source of electricity supply for both residential and commercial use.

There is a significant disparity between the total monthly salary, which includes bonuses, for the various job classifications.

Only 350,000 people call the island nation of Iceland home, making it one of the least populous countries on the entire earth.

Contrarily, it’s one of the most costly countries to live in. If you will like to visit this country then you should start by reading about How to apply for Iceland Schengen Visa.

Switzerland’s economy is widely regarded as being among the most mature and well-developed free markets in the world.

A worker can expect to earn, on average, $66,567 per year in compensation.

This affluent and dynamic nation provides its citizens with some of the best salaries that can be found anywhere in the world.

Despite the fact that the country has no access to the sea, it has achieved success in a wide variety of industries,

Such as chocolate production, banking, electronics, pharmaceuticals, watches, and tourism.

Switzerland is home to the headquarters of a significant number of the most successful multinational corporations in the world.

United States of America is the country with the greatest metric of disposable income per capita, coming in at $65,836.

This is despite having a population that is over 300 million people strong.

The Gross Domestic Product of the country was valued at $20.58 trillion,

United States of America is home to a number of important industries, including manufacturing, health care, and professional and commercial services.

The typical workweek for an American employee consists of 44 hours,

It is noteworthy to note that American workers receive their wages on a weekly basis from the majority of the companies they are employed by.

You will do well financially no matter what line of work you choose, whether it be teaching or engineering.

Denmark’s economy is a contemporary mixed economy, and the country’s living standards are high and comfortable.

It is significantly dependent on international trade in addition to having a high degree of government services and transfers.

The concept of minimum wages does not exist in Denmark;

Despite this, the country boasts the most equitable income distribution of any in the world.

Workers in Denmark take home a happy smile with an annual wage of $57,150.

This country is regarded for having some of the happiest workers in the world due to the high incomes and the positive working circumstances.

Because of the country’s size and population, employment opportunities are restricted.

A high level of life has traditionally been a hallmark of the Netherlands.

Several studies have found that the high quality of education and healthcare available in the Netherlands contribute to the high level of life satisfaction enjoyed by its citizens.

The Netherlands is home to a population that is predominantly bilingual as well as a diverse array of work opportunities available throughout the European Union.

Because it possesses some of the largest ports in all of Europe, the nation’s economy is heavily dependent on foreign trade.

In addition to this, it boasts one of the lowest rates of both unemployment and inflation.

People are required to put in an average of 35 hours of labour per week in the Netherlands.

It is one of the highest-paying jobs in the world, with an annual income of an average of $56,552 for workers.

Germany is not only one of the most technologically advanced and prosperous countries in the world,

It also boasts the largest economy in Europe. The average salary in Germany is approximately $56,000 per person.

Both the nation’s physical infrastructure and it’s educational system are in advanced stages of development,

Cost Of Living In Germany For Students is relatively welcoming for students from all over the world.

In addition to this, it has an equitable distribution of wealth and some of the most advanced medical facilities in the world.

Germany also has an array of successful economic sectors that have played an important role in the country’s development.

The pharmaceutical industry, the medical care industry, manufacturing, tourism, transportation, and agriculture are all notable industries.

Given the size of the country, there are undoubtedly a great number of employment opportunities available in a variety of fields.

Belgium has traditionally been regarded as having some of the world’s top living and educational standards.

But the country is also well-known for it’s chocolates and engineering. The national average pay in Belgium is $55,590 per year.

If you are a resident of the European Union, finding work is not nearly as challenging as it is in other nations in the region;

However, people from outside the EU are required to have a work permit.

Other than it’s excellent soils, Belgium does not have many natural resources.

Belgium is home to a diverse range of manufacturing industries,

Including those related to the production of chemicals, food processing, pharmaceuticals, vehicles, electronics, and machinery.

Australia has what is often regarded as having one of the best minimum wages in the world.

When compared to the wage of six dollars per hour that is available in the United States,

The workers in Australia receives 17 US dollars for their hour of labor, almost tripled.

If we look at the GDP as a whole, Australia has the world’s twelfth largest economy,

But, if we look at the GDP as a percentage of the population, it has the world’s fifth largest economy.

The marine wool produced in Australia is considered to be of the highest quality in the world.

Annual salary for an employee in Australia averages $54,401 with a standard workweek for employees peaked at 35 hours.

Every hour worked beyond the standard 35-hour workweek is counted as overtime, for which the employer provides a separate payment.

Here are the 10 Most in Demand Jobs in Australia for foreigners you might want to consider.

The International Monetary Fund and the World Bank report that the average income of a Norwegian is the fourth highest in the world,

Despite the fact that Norway is ranked as one of the most costliest countries in the world.

The most money is made in the country’s strong gas and petroleum business, which produces the most goods.

Norway is well-known across the world as an exporter of fish, lumber, textiles, and products derived from aquaculture.

In addition to having an extremely low rate of crime, the inhabitants of Norway are also considered to be among the happiest in the entire globe.

The average pay for workers in Norway is 54, 027 dollars per year, making it one of the highest in the world.

The country has high tax rates, but all levels of education and healthcare are provided free of charge, making it an attractive place to live.

If you’re interested in this country then I recommend you check out How to Migrate to Norway and Become a Permanent Resident. You can even glance through the cost of living in European cities like France and Germany. 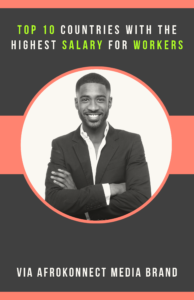 This is a list of the countries where the average monthly wages of workers are believed to be the highest.

10 Countries with Highest Minimum Wage in the World 2023

The video below is about top 10 counties with high minimum wages for workers;

You’ve made it to the end of this article about top 10 Countries with the Highest Salary for Workers in the world 2023 via Afrokonnect.

Thank you for reading, kindly share and let us know what you think via the comment section.

Cost of shipping a car from USA to Nigeria in 2023