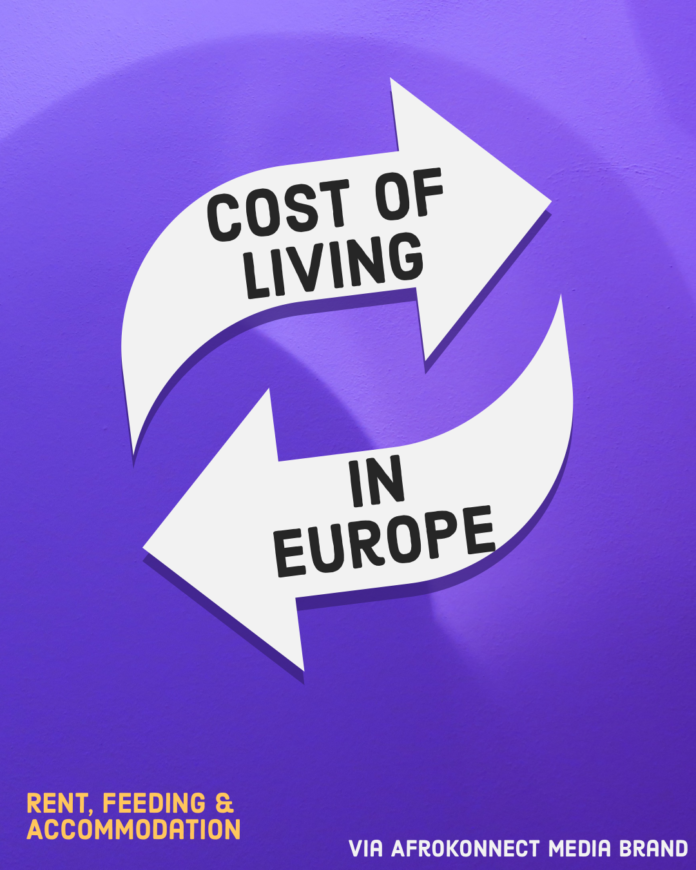 Welcome to this publication about Average Cost of Living in Europe in terms of Rent, Transportation and Feeding for international students and anyone else that wants to relocate.

Europe, which is also considered a component of Eurasia,

When we think or talk about Europe, some of the first things that comes to our mind are it’s palaces and castles,

Sometimes it’s cathedrals as well as its beaches and vineyards, including its architecture, culture, and art.

To be honest there are so many intriguing things about Europe depending on your background and reason for traveling,

In addition to being one of the seven continents that make up our planet,

Europe is famous for being the location of many of the most prestigious educational institutions on the entire planet.

Europe is home to a number of the world’s most prestigious educational institutions and sporting competitions.

Even a crash course from one of those universities can add a significant amount of value to a candidate’s resume.

However, a significant issue shared by students traveling to Europe from a variety of nations is the high expenses that comes with living in Europe.

Average Cost of Living in Europe for International Students

First of all, that is something that is highly dependent on the nation, the city,

And ultimately the university that you are attending in order to complete your program,

Cost of Living in Germany for Students is not the same as cost of living in countries like Australia or even New Zealand,

For instance, the cost of living in London for international students who are living alone is approximately around £2,892 per month,

This is the same even if they are sharing an apartment.

More so, it is possible that you will require around or even more than 1,100 Euros if you are residing in Paris, France.

In order to gain a better understanding of the regional average cost of living in Europe, the following paragraphs will use the United Kingdom, France, and Germany as illustrative examples.

Average Cost of Living in Europe for families

Let’s compare the average costs of living in the United Kingdom, France, and Germany so that you can have a better idea of what it’s like to support a family in Europe.

The estimated cost of living each month for a family of four in UK, excluding rent, is around 2,269 pounds,

This figures are not constant as it can increase or decrease because of factors like currency and what you choose to spend on,

Some people love to have fun and go out with friends, while others don’t mind staying indoors.

Averagely, if a couple did not have to pay rent in Uk, their monthly costs would be around 1,304 pounds.

The typical cost of living for a student in the United Kingdom is between 1,100 and 1,300 pounds per month, this cost takes into account the cost of housing.

We have published a comprehensive review about the average Cost of Living in UK cities like London, Liverpool, Manchester and Birmingham.

One of the primary worries for international students studying in Europe is the high expense of living there.

On the other hand, if we focus on the United Kingdom, the bills will look something like this:

Average cost of Rent, Transportation and Utilities in Uk for International Students

Average Cost of Living in Europe

If they didn’t pay rent, a family of four in France would require approximately 2,906 euros per month to survive.

In the same country, a household of two would need approximately around 1,624 Euros in expenses excluding rent.

Without taking into account the cost of housing, a student in France would require approximately 812 euros per month.

Average cost of Rent, Transportation and Utilities in France for International Students

Let’s talk about how much it costs to live in France, including a list of necessities and their respective prices;

Within these parameters, students in France are able to handle essentials such as housing and other overhead costs:

The average monthly cost of living in Germany for a household of four is approximately around € 2,497,

For a household of two, they need approximately around € 1,466 to survive in Germany.

At least the sum of 588 Euros is necessary for a college student to be able to live comfortably in Germany.

The standard of living can be quite different from one nation in Europe to the next, even within the same continent.

Average cost of Rent, Transportation and Utilities in Germany for International Students

The amount of money that can be taken out of a restricted bank account in Germany by a student is limited to a maximum of 861 euros.

Let’s have a look at what the typical cost of living is like for international students in Germany.

Average Cost of Living in Europe for Students and Families 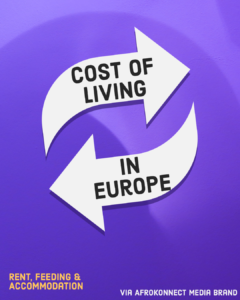 Europe is widely regarded as one of the world’s most expensive continents,

Most of the Top 10 Countries with Highest Salary for Workers in the world are also located in Europe,

It is on this continent that some of the cities with the highest cost of living anywhere in the world can be found.

One good thing about Europe is that there are areas to live that are both very expensive and very affordable in the vast majority of the nations of the world.

If you are considering attending school in Europe and have been curious about how much money you would need to support yourself while you are there,

You might be shocked to learn some of the facts regarding the expense of attending school in Europe.

Those who are curious about the minimum cost of living in Europe will find that the countries in Eastern Europe have the lowest costs of living,

However the educational institutions in Western Europe are of higher quality.

Cost of rent in European Countries

You will be pleasantly surprised to learn that the average rent in the United Kingdom is only 33.03 on the rent index.

This is in stark contrast to the average rent in Switzerland, which is 54.92.

Switzerland’s rent is considered to be among the most expensive in Europe.

In contrast, with a cost of living index of 70.64, this is a relatively inexpensive place to study abroad.

The United Kingdom is home to a number of Europe’s most affordable cities,

Many of which are located in close proximity to some of the continent’s finest educational facilities.

The national average for rent in the United Kingdom is £547 per month,

Although the cost of living in the capital city can be significantly more expensive.

You can check out the top 5 safest, most affordable and Best Places to Live in UK,

Or you can explore the Best Places to Live in Canada, which also offer some of the Safest & Most Affordable Cities.

Cost of Living in Europe for International Students:

The video below is about the cheapest countries to live in Europe,

You can watch it to help you make a better decision depending on your financial ability;

This brings us to the end of this publication about Average Cost of Living in Europe in terms of Rent, Transportation and Feeding for international students and anyone else that wants to relocate.

Thank you for reading, kindly let us know what you think via the comment section and don’t forget to kindly share this article on social media.

Top 10 Richest Gospel Musicians in Kenya and Their Net Worth