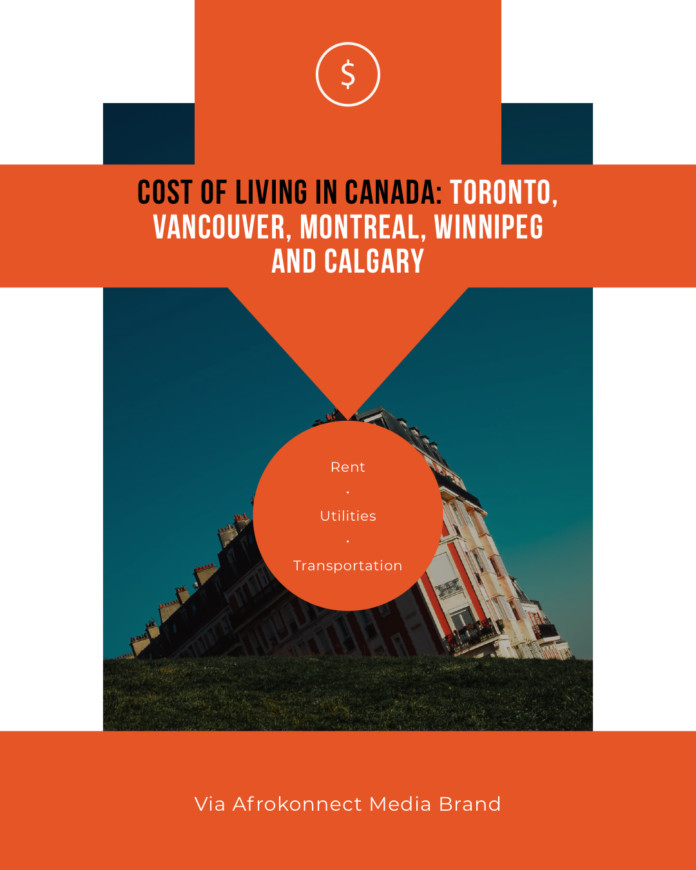 Welcome to this article about the average Cost of Living in Canada via Afrokonnect,

We will exploring how expensive it is to live in some of the major Canadian cities like Toronto, Vancouver, Montreal, Winnipeg and Calgary among others.

Canada has the ninth strongest economy in the world, which enables it to afford providing it’s residents with universal healthcare coverage.

But there is a cost associated with providing such a public amenity.

As a result, you may be thinking, “What is the average cost of living in Canada?” To a large extent, it is determined by the state or municipality in which you choose to reside.

After taking into account things like rent, utilities, food, and transportation, we’ve calculated the minimum amount of money required each month to maintain a certain standard of living in Canada.

Cost of Living in Canada Compared to the United States, Australia and other countries

How much money do you need to have saved up before moving to Canada so that you can live comfortably there?

Well, it really depends on the perspective you’re taking and your spending habits,

Canada is placed number 26 on the list of the world’s most expensive nations to live in,

The United States and the United Kingdom rank 27th and 28th, respectively, making it only slightly higher.

To put that in perspective, France comes in at number 17, Australia at 14, and Japan at the very top of the list in terms of price (12th).

I recommend you check out the Cost of living in Australia, if you feel Canada is not for you. You can even glance through the cost of living in European cities like France and Germany.

Average cost of Living in Canada per month

And exactly where does all of that cash end up going? Food and all of the other costs associated with living, such as transportation, recreation, and utility bills, typically share an equal portion of the budget.

The following is a breakdown of expenses that comes with living in Canada regardless;

What is the cost of living in Canada with rent?

You might be curious in the cost of renting various sized properties in Canada, given that rent is likely to be one of the more costly expenses you’ll have to deal with there.

The amount that you’ll have to pay for rent is also heavily influenced by the region of Canada in which you choose to make your new home.

In reality, Canadian rents are 7.67% higher than their British counterparts.

The following is a rundown of what it looks like, broken down according to whether or not you live in the city center.

In terms of population, Toronto is the most populous city in all of Canada, and it can be found in the province of Ontario,

Which is in the east-central section of Canada sharing a border with the United States.

On the northwestern shore of Ontario is where you’ll find this sprawling metropolis full of tall buildings.

But, how much does settling in Toronto cost? Given that Toronto has the second-highest cost of living in Canada.

The following is a rundown of the different kinds of expenses you can run into if you decide to make your home in Toronto.

How much does it cost to rent a place in Toronto?

Whether or not you choose to reside in the heart of the city will have a significant impact on the amount of money you will have to spend on rent each month.

How much does it cost to live in Ottawa, Ontario?

If you wish to live in Ontario, there are other cities to consider besides Toronto,

You can start by exploring the top 5 Best Place to Live in Canada in terms of safety,

Additionally situated there is Ottawa, which serves as the nation’s capital.

In spite of the fact that it is just the fourth largest city in the country, it serves as the political center of the country,

And is an excellent location for obtaining an education due to the large number of schools and universities in the area.

If your relocation is school related then you might want to check any of the top 10 Best Business schools in Canada.

The following is a breakdown of the costs associated with living in Ottawa:

How much does it cost to rent a place in Ottawa?

The expenses of rent also vary depending on the size of the flat.

The province of British Columbia can be found on the west coast of Canada, right on the water with the Pacific Ocean.

It is home to vast scenery as well as well-known tourist spots such as Glacier National Park and Whistler Ski Resort.

At $4,557 per month, the average cost of living in this area is among the highest you’ll find anywhere in the entire country.

Those who work in the film and art sectors are drawn to the thriving metropolis that is Vancouver because of it’s vibrant arts scene and film industry.

In addition to it’s well-known reputation for supporting the performing arts and arts in general, it frequently provides the setting for a number of film shootings.

The following is a breakdown of the average costs associated with living in Vancouver:

How much does rent cost in Vancouver?

The following is an example of how much it would cost to rent in this expensive city:

Montreal is located on the opposite side of Canada, smack dab in the middle of French Canada.

It should come as no surprise that the majority of French Canadians living in this area are completely fluent in French.

When it was a part of New France, this area was formerly known by it’s current name, Canada.

Although it is the second most populous province in Canada, the city of Québec is the largest in the province.

The city of Montreal is located on an island in the middle of the St. Lawrence river,

It is composed of a number of distinct boroughs that were formerly their own sovereign cities.

With an average monthly cost of $2,625 Canadian dollars including rent, it is actually one of the most cost-effective places to live when compared to the other main provinces in the country.

The breakdown is as follows:

How much does it cost to rent a place in Montreal?

As can be seen in this comparison, the cost of rent in Montreal is significantly lower than in the majority of other cities in Canada.

The province of Manitoba, which may be found in the middle of Canada, is well-known for it’s stunning natural scenery.

The city of Winnipeg, which serves as the provincial capital, was developed at the confluence of two rivers, namely the Red River and the Assiniboine River.

Manitoba is located roughly in the geographical center of Canada, and it also features prominently among the country’s most expensive metropolitan areas.

The monthly cost of living there on average including the cost of rent is around 3,324 Canadian dollars.

When broken down into it’s component parts, these expenditures look like this:

How much does rent cost in Winnipeg?

The province of Alberta is characterized with some of the world’s most spectacular mountains, grasslands, and woods.

Majority of Alberta’s inhabitants live in and around the two major cities located in the southern half of the province: Calgary and Edmonton.

Calgary has a larger overall population than it’s rival, Edmonton.

In this region, the oil industry is by far the most important sector of the economy, and the spectacular skyline is largely the result of the construction of enormous skyscrapers.

It’s possible that the high cost of living in this province, which averages $4,115 per month, is attributable to the prosperous industry located there as well as the large number of people who are interested in relocating there.

The following is a breakdown of the cost of living, item by item:

How much does rent cost in Calgary?

When compared with the rental costs of some of Canada’s other medium-sized cities, you might find that Calgary’s are on the upper end of the spectrum. 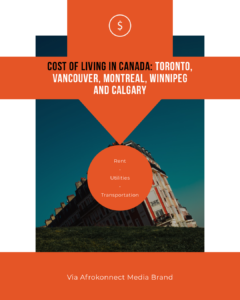 What is the cheapest place to live in Canada?

As with any decision, though, you should consider not only the wage you could expect in each of these bustling metropolises, but also the impact that the province’s diversity and beauty will have on your standard of living.

Which cities in Canada have the highest costs of living for residents?

Vancouver is, by a significant margin, the nation’s city with the highest overall cost of living.

According to the Mercer’s annual cost of living report, it came in at position number 93 worldwide.

Coming in at 98th was Toronto, which was not too far behind.

The following is a list of the 5 most expensive cities in Canada, in order of their cost of living:

What cities in Canada have the cheapest cost of living?

Québec City, which is located in the province of Québec, has one of the lowest overall expenses of living in all of Canada.

Of course, that also includes rent! The following are top 5 Canada’s most affordable major cities:

The video below is about a tale of 6 Canadian cities in terms of cost of living;

If you’re planning a move to Canada for business the you might to consider the Business Visa Requirements,

Whatever the case may be, here is How to apply for Canada visa and Migrate Easily.

This brings us to the end of this publication, hopefully you found the information that brought you here. Good luck

10 Cheapest European Countries to Visit or Live in 2022

Slangs in Nigeria and their Meaning – Top 15

How To Retrieve Your Money After You’ve Been Scammed

Is SLP a Good Investment in 2022? – Smooth Love Potion

How to Earn Money with Instagram Reels Play Bonuses in 2022