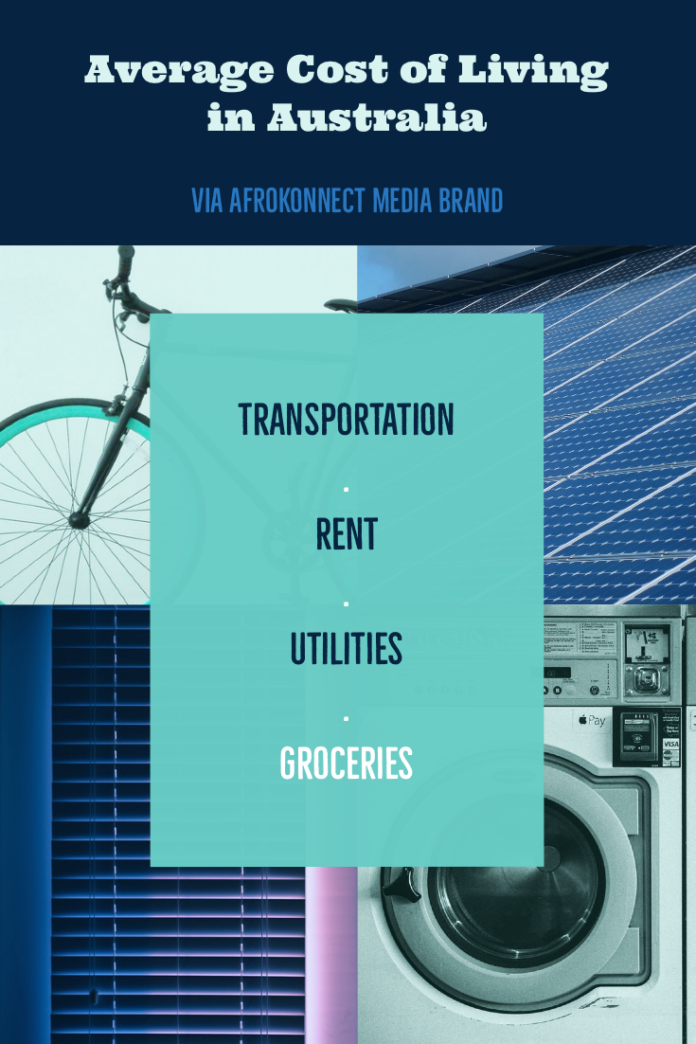 Welcome to this article about Cost of living in Australia via Afrokonnect,

In this post you will discover the average expenses incurred in Australian cities like Sydney, Melbourne, Brisbane, Canberra and Perth.

Checking out how the standard of living in Australia stacks up to that of other countries across the world should be the first thing you do.

The Australian standard of living is the fourteenth highest in the world,

This warm country is ranked higher than the United States, the United Kingdom, and now even Canada,

At least when you exclude rent costs, which is usually the most expensive item.

When rent is taken into account, Australia falls to 15th place, a minor decline from its previous position of 14th.

Still, that’s a lot more than in most other countries.

Hong Kong and Singapore are the only two Asian or Pacific countries with higher rankings.

However, the United States and New Zealand are closing the gap quickly.

A country’s cost of living should be taken into account with the average salary when evaluating a relocation,

Here are the top 10 Countries with Highest Salary for Workers in the world,

Australia excels tremendously in this area, since it’s average salary is the ninth highest in the world.

Cost of living in Australia compared to USA, United Kingdom and Canada (2022)

Average cost of Living in Australia per month

Monthly cost of living in Australia depends on individuals spending habit, though roughly it comes at AU $1,332.33,

This does not include the monthly rent, which can be estimated at AU $1,190 for a studio or one-bedroom apartment.

Although these prices may appear to be quite high, they are balanced out by the country’s higher-than-average salaries, which are now at AU $4,062.00 per month.

If you’re planning on a relocation to Australia on work related basis then you might want to check the 10 Most in Demand Jobs in Australia for foreigners,

Similarly, if you’re interested in pursuing educational opportunities then consider any of these 10 Best Universities in Australia for international students.

In any case, below are some expenses you should expect to incur during your stay in the country:

Average monthly salary after taxes in Australia is: $4,062.

Cost of Living in Sydney, Australia

Sydney is a cultural hub with plenty to offer, from it’s roomy homes to it’s bustling markets.

If you’re a fan of the stage, you might want to take full advantage of the many shows that are available, including those that take place in the world-famous Sydney Opera House.

To what extent, though, does one have to spend a fortune to enjoy this vibrant metropolis?

Sydney has the highest cost of living among Australia’s seven major cities,

Check out the data below to decide if a trip to Sydney is in your budget.

Full-day, private preschool tuition and fees per month in Australia are AUD $2,419.85 for one child.

How much does renting cost in Sydney?

It’s common knowledge that Sydney has Australia’s best and most expensive rents.

On the other hand, the homes tend to be larger than what some potential foreign residents, particularly those from the United Kingdom, may be accustomed to.

All types of housing, from brand-new construction to modern apartments to historic mansions, will be available.

Please refer to the table below for a detailed breakdown of how much room you’ll get for your money.

Cost of Living in Melbourne, Australia

Melbourne is the 2nd largest Australian city, a financial and commercial center, this city has a wealth of attractions to explore.

In light of the fact that Melbourne is widely regarded as the sporting capital of the globe,

It is possible that you will have an especially strong connection to the city if you are an avid sports enthusiast.

On top of that, it’s historically significant. In 1880, as a result of the Victorian gold boom, Melbourne surpassed New York as the world’s wealthiest metropolis.

You might be wondering what this implies for the costs that it incurs in the present day.

The cost of living in Melbourne, which is considered a major city in Australia, ranks as the fourth highest in the country.

In terms of the cost of living, that puts it roughly in the middle.

The following table will show you the breakdown.

Full-day, private, preschool tuition per month in Australia is AUD $2,466.41 for one child.

How much does rent in Melbourne cost?

In comparison to the other seven major cities in Australia, Melbourne’s rental prices are the fifth most expensive.

The cost of a three-bedroom apartment in the city center is much more than in the suburbs or other part of the country.

Cost of Living in Brisbane, Australia

The city of Brisbane is located on the Brisbane River and is home to a sizable population.

Since it was established by native Australians, it also holds the distinction of being one of the oldest cities in the entire country of Australia.

When Queensland became it’s own state in 1859, it was given the honor of being the state capital.

Popular tourist attractions in this modern metropolis include the historic Queenslander buildings and the exciting South Bank, which is teeming with exciting nightlife options,

On the other hand, when compared to the cost of living in other parts of Australia, the expense of living in Brisbane may discourage you from relocating there.

Brisbane is the second most expensive city in Australia. Having children in the city is expensive because of the high cost of childcare.

Everyday items, such as bread, are a little more expensive than they would be in other cities. Please see the additional costs listed below.

Also, you can check out the Cost of Living in United Kingdom: London, Liverpool, Manchester and Birmingham. You can even glance through the cost of living in European cities like France and Germany.

How much does renting cost in Brisbane?

Now that you have a broad idea of how much it will cost you to live in Brisbane, Australia, let’s have a look at one of the biggest outlays of money: rent.

The good news is that Brisbane ranks fourth overall and has one of the lowest total costs of living compared to other major cities.

It is possible that you will find it more beneficial to reside on the outskirts of the city,

Rather than in it’s core due to the fact that you will be able to acquire a location that is much more roomy for a price that is comparable to that of a one-bedroom apartment located inside the city limits.

Cost of Living in Canberra, Australia

The Ngunnawal people, who were the indigenous inhabitants of Australia, are responsible for giving the city of Canberra it’s name.

It is one of the few locations in Australia where hot air balloon rides are available, and the area even hosts a festival in honor of the activity.

As an added bonus, there are plenty of excellent vineyards and breweries in the area to have a beverage or two.

But without a doubt, the most attractive aspect of living in Canberra is the city’s relatively low cost of living.

When compared to Australia’s other six main cities, Canberra has the lowest cost of living (after accounting for rent).

Full-day, private, preschool tuition in Canberra is AU$1,950 a month for one child.

How much is the monthly rent in Canberra?

Consequently, you may be curious about the going rate for accommodation in the nation’s capital.

Although living expenses in Canberra are relatively low, rent is not one of them.

It is far more expensive in comparison to the other major cities in Australia.

However, if you can live with a smaller space, you can save money.

Cost of living in Perth, Australia 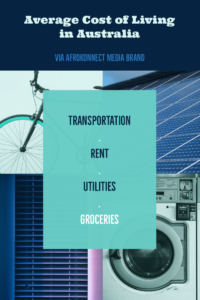 The fact that Perth has eight hours of sunshine per day is one of the many attractions that could sway your decision to relocate there.

You will have the opportunity to explore Kings Park, the largest inland park in the world, under conditions that are ideal for doing so, since the sun will be shining down on you.

One more thing that can make you glad about calling Perth home is that it is quite inexpensive compared to the other major Australian cities.

You will save money on the smaller expenses, such as your groceries, despite the fact that the utilities are quite pricey.

Full-time private preschool tuition for one child per month in Australia is $2,059.23.

What is the cost of rent in Perth?

The monthly cost of renting a home or apartment in Perth is, on average, not particularly high.

It is the largest city with the lowest cost of living, even when compared with Adelaide.

That is, provided that you do not have any intentions of renting a large apartment in the heart of the city with three separate bedrooms. You’ll have to pay a premium for all that room.

Average cost of Living in Australia

The video below is about a cost of living in Australia based on Monthly expenses, I watch the complete guide;

Since you are now familiar with the fundamentals of Australia’s cost of living,

To enjoy all of the benefits, you can start by checking out this Australian Visa Application guide,

If you feel Australia is not for you then is time to look at for Cost of Living in Canada,

And, 10 Cheapest European Countries to Visit or Live as an international student or with a family.

You are in a better position to begin making preparations for a trip to the country to see it’s many unique and beautiful locations.

10 Cheapest European Countries to Visit or Live in 2022

How to Verify Your COVID-19 Vaccination Record Online

Best Companies in the World: Most Valuable (Top 10)

Naira Marley And Zlatan Who is Richer ? Check their Net Worth and Personal Life

Is SLP a Good Investment in 2022? – Smooth Love Potion