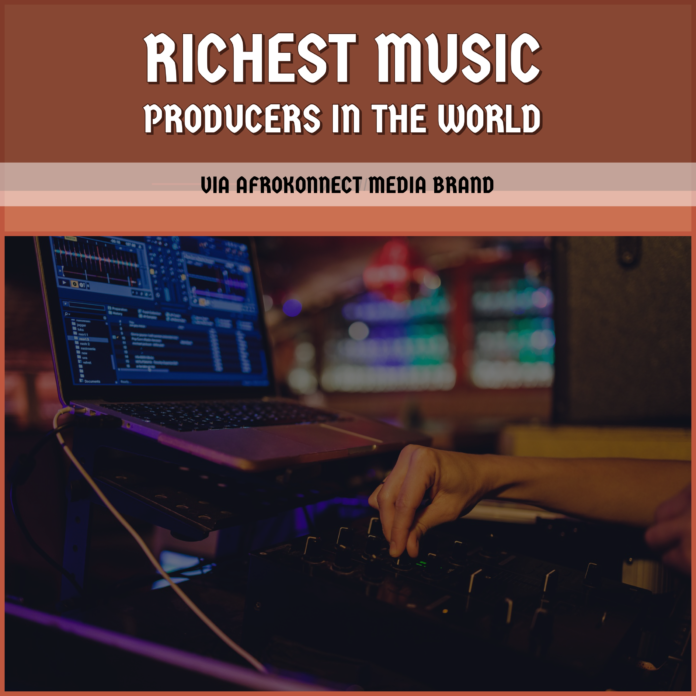 Top 10 Highest Paid and Richest Music Producers in the World in 2023 via Afrokonnect.

Even though they are the backbone of any great song,

Today we are going to review some of the most successful music producers in the world,

Before we dive into the business of the day, we need to clarify some key terms.

Who is a Music Producer?

A Music Producer also known as “Record Producer” is a Creative leader who oversees all aspects of music creation,

He or She picks the choice of sound, Instrumentals and sometimes musician,

Same way a Director is to a Film or movie so also is a Producer to a Song. For Example, Dr. DRE, Killertunes, Etc.

Music Producers are the keys that unlock and broadcasts these talents to the whole world,

When we listen to our favorite songs we give credit to the singers and lyricists but fail to acknowledge the Producer who made sure the song comes out in perfection.

Some of them write the Songs, they are also the Sound Engineers and most times people don’t even know.

Benefits of being a Music Producer

Most Music Producers are lovers of Music in which they project their music to the way they prefer theirs,

It gives you an opportunity to fulfill your passion in the sense that You won’t get bored while at work because that’s what you are passionate about.

In this field, there are a lot of Creative People and being one of them will enable the opportunity to meet most of them and eventually Long lasting relationships starts to build up,

For example, DJ Khalid and Drake started off as partners and now they are more like family.

People use different method to influence the Populace,

Music is one of them and it’s a very Popular method.

Propaganda can be spread through music; There are also banters in the Music Industry.

Music provides you with a platform to which you can propagate your opinions.

Do you know that some of these Producers have their songs played in Popular Movies, One has been thrown of the stage and one is dead.

Read to the End of this Article to find out Who the Richest Music Producer is.

Highest Paid/Richest Musicians in the World – 2023

In the World as of Today we have a lot of Music Producers,

We usually acknowledge the Singers of various Songs but we fail to notice the producers who put everything to make sure that the song becomes a Success.

The 10 names that am about to mention have stood out of the many Music producers that we have in the world and I don’t know where the music Industry would have been if not for them.

Let’s dive straight into it:

Her Best/Most recognized work is her involvement on 1993 Undertow, which went Platinum,

Some of her most popular songs includes Prison Sex, Intolerance and Swamp Song.

Her Music Producing Career began in the 90s,

She is the Producer of Green Jelly, a Comedy Rock Band.

MNEK is a British Music Producer, he has been nominated for a Grammy, and he received the ASCAP Vanguard Award.

His contribution to Beyonce’s “Hold Up” was his breakthrough in the Music Producing industry.

Notably, he is a Gay which has earned him a lot of criticisms in the Music Industry,

That prompted him to become a member of the Association Pride in Music for aspiring LGBT Songwriters.

MNEK has also produced Songs for the likes of Selena Gomez, Dua Lips and Christina Aguilera.

Imogen Heap has been writing songs from the age of 13 while she was in Boarding School,

Her primary Genre is Pop and Electro Pop, if you have listened to the tunes of Harry Porter and the Cursed Child then you would be glad to know that She is the composer of that Tune.

She has received the Laurence Olivier Award for Outstanding Music in a Play, Etc.

7) Linda Perry Net Worth – Richest music producers in the world

Linda Perry was born into a family of Muscians. She faced a long of struggles ranging from Drug addiction to Kidney Disease. She is a true example of Musicians rising from the Bottom to the Top, From singing at coffee shops to the 7th Richest Musician in the world.

“What’s Up” was her breakthrough which was sung by the Four Non-Blondes. She has won a Grammy Award and 2 ASCAP awards. She has worked with Vanessa Carlton, Christina Aguilera, Britney Spears, etc.

Finneas O’ Connell is the brother of Billie Eilish and has been a major factor of her Success from writing of her songs to producing it,

He has also writing for many artistes aside Billie Eilish namely:

Lt.George Martin was a lover of music from the age of 6 when he learnt how to play the Piano,

He worked in the Music department for the James Bond Movie Series,

He was nicknamed the Knight Bachelor in the late 90s for his excellent taste of music which gave birth to generations.

One of his most renowned song was “Twist and Shout”,

Before his death he had already become a Legend in the Music Industry.

4) Nile Rogers Net Worth – Richest music producers in the world

Nile Rogers is a 3-time winner of the Grammys Award,

He is the Co-founder of Chic, he has sold over 500 million units of his albums and over 75 million singles Worldwide.

Also, he battled against Brutal Prostrate Cancer which he has recovered from by God’s Grace,

One of his most popular song is titled “Le Freak”.

Richest music producers in the world in 2023

Rick Rubin has had a very great journey, from his school days he was in a band named “The Pricks”,

In which he was once thrown off the stage for brawling with the audience.

In the early 80s he formed a band which he named “The Band Hose” which till now takes the credit of popularizing Hip-Hop,

His interest in Music Producing came up due to his friendship with DJ Jazzy Jay.

One of his most popular song is titled “Hazy Shade of Winter”.

Max Martin is a Swedish Songwriter and the Best Music Producer of the 21st Century (According to Billboard),

He has not only recorded with Big Musicians but also help a lot of Young Musicians rise to stardom.

You would have listened to a lot of Songs written by him without you even knowing it.

He has produced a lot of songs for musicians ranging from Taylor Swift, The Weekend, Etc.

He has written songs which has been ranked 1st on Billboard Hot 100 not once but 23 times.

This feats has enabled him to win 11 ASCAP Awards,

His most Popular Songs are Ace of Base, Roar and Beautiful Life.

He is also an entrepreneur, Businessmen among others,

Also, he has helped a lot of Young Musicians to get to stardom namely: Eminem, Snopp Dog, Kendrick Lamar and many other top artistes. 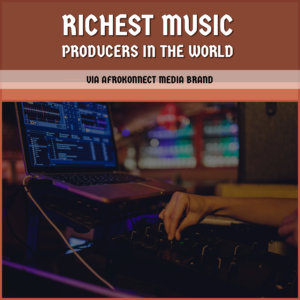 Who is the best Music Producer in the World in 2023?

Answer: Max Martin is best Music Producer to grace the face of the Earth,

He produced Taylor Swift “We are Never Getting Back Together” and “I Knew You Were Trouble”- turning a Country Superstar into the Biggest Pop Artist on the planet and making him win an Album of the Year in 1989 was a remarkable achievement and showed Martin’s run of Dominance.

How much does a Music Producer make in a year?

Answer: Here is a Detailed Explanation according to Payscale:

Richest music producers in the world in 2023

The video below by Henny Tha Bizness is about 10 tips on how to start making money as a music producer,

If that is something that interest you then I suggest you watch and be inspired;

This brings us to the end of this article about Top 10 Highest Paid and Richest Music Producers in the World in 2023 via Afrokonnect.

Phyno net worth and Biography in 2023

Nasty Blaq Biography, Career, and Net Worth in 2023

Buju Banton Net Worth in 2023 and Biography