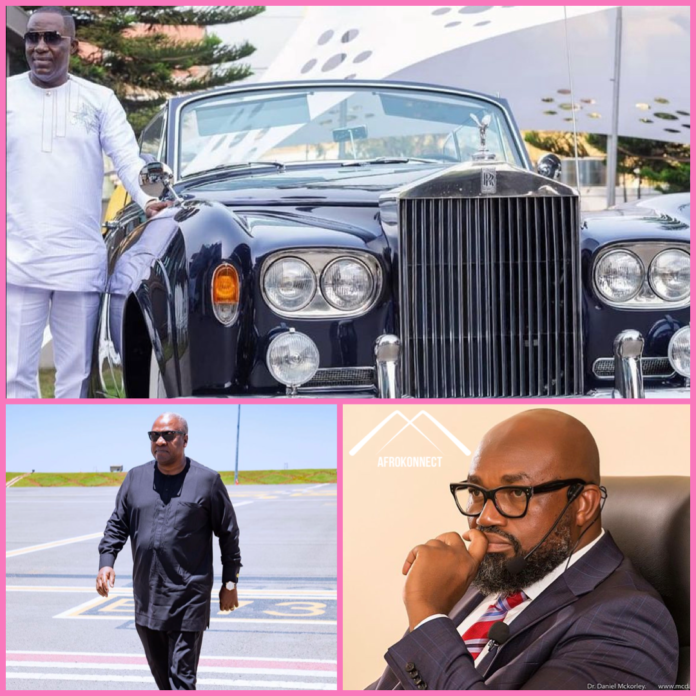 Welcome to this article about the Top 10 Richest Men in Ghana and their Net Worth in 2023 according to Forbes List via Afrokonnect.

Recently, we published an article about the richest men in Nigeria and a lot of our audience on social media wanted a Ghanaian version,

So, we complied a list of the wealthiest Ghanaian men this year,

This list is based on factors like streams of income, investments, assets, influence and ultimately the overall net worth.

In case you don’t know, Ghana has a market-based economy unlike other countries like Nigeria that depend primarily on crude-oil,

Which means there are limited policies hindering trade and investment in the country,

This creates an enabling environment for businesses to thrive and make profit,

Also, Ghana is endowed with natural resources too, the country is among the largest exporters of cocoa in Africa.

Without further ado, read on to explore top 10 wealthiest people in Ghana.

Most people in Ghana regard to Kennedy Agyapong as a politician only,

Ignoring the fact that he is a serial business tycoon and an investor.

He was born on June 16, 1960 and hails from Assin Dompim in the Central Region of Ghana,

His father’s name is “Francis Ohene Agyapong” while “Mary Nsiah” is his mother,

While growing up, Kennedy attended Adisadel College in the Central Region for his basic education.

Over the years the Ghanaian legislature has went on to become one of the most successful businessmen in Ghana,

He founded companies in different sectors including some in the media industry,

Kennedy Agyapong is one of the richest men in Ghana currently with an estimated net worth of $250 Million which equals around 1,925,000,000 Ghanaian Cedi.

Serge Bakalian is a Ghanaian with Armenian descent, he is the 9th wealthiest man in Ghana on this list,

He inherited a million-dollar company from his father and turned it into multimillion dollar investment,

This is a company that operates in Ghana but their products are consumed locally and exported internationally for consumption.

Serge Bakalian is the current CEO of the popular Takoradi Flour Mills in Ghana,

Over the years he was able to multiply his wealth, create opportunities and reinvest back into the Ghanaian economy,

His company is among the few firms in Ghana giving back to the community,

At the moment Serge Bakalian has an estimated net worth of $500 million which equals around 3,890,000,000 Ghanaian Cedi.

8. The Hitti Family (Group) Net Worth

The Hitti group is a family business set up by Robert Hitti in 1973,

The company started as a small deport and went on to become a multinational cooperation,

Hitti group consist of 9 solid companies spread across the African continent, 3 of which are located in Ghana.

Now this is a company that has employed more than 2000 people and is still planning to venture into telecommunication, mining and the oil and gas sector,

Notably, their Suvinil Paints controls about 25 percent of the paint market in Ghana,

Their ASHFOAM Mattress is the second-largest manufacturer of mattresses in Ghana.

Alwan Hitti is one of the family members who serves as the Chairman and Chief Executive Officer of ASHFOAM,

On the 7th spot we have Kwabena Duffuor, a man who has held so many positions including the “minister of finance” title,

Duffuor is an alumina of University of Ghana and a Fellow of the Chartered Institute of Bankers,

The Ghanian former minister of finance is also a business, a philanthropist and he has also served as the governor of the Bank of Ghana.

In 1999 Kwabena Duffuor was named as one among four of the best Central Bank Governors in the World,

This recognition came at an International Monetary Fund/World Bank conference.

Aside his affiliation with government, Kwabena Duffuor is also the founder and chairman of HODA Holdings,

This is a multimillion-dollar company that has made millions and created thousands of jobs,

At the moment Kwabena Duffuor is one of the richest men in Ghana with an estimated net worth $700 million which equals around 5,446,000,000 Ghanian Cedi.

Daniel McKorley is a popular Ghanaian business magnate that has been active since 1999 till date,

In 2016 Daniel McKorley won the “entrepreneur of the year” at the Ghana Aviation award, which further proved his value in the country.

He is also the chairman and Chief Executive Officer (CEO) of the same company and many others across Ghana.

Daniel McKorley is highly educated, in fact he is a graduate of business management with over a decade of experience,

However, at a point he had to drop out of the University as a result of tuition fees,

He fended for himself before he could finish university after almost 10 years of struggle.

After graduating he decided to start his own company, in 1999 he established McDan Shipping Company,

The company went on to become one of the most trusted in the industry with headquarters in Accra and Branches in Tema and Takoradi.

Their partnership with Universal Freight Organization, Cross Trades and World Cargo Alliance (WCA) has propelled the company to another level both financially and in terms of impact.

Fortunately, with hard work and dedication, today he is one of the most successful businessmen in Ghana,

At the moment Daniel MCKorley has an estimated net worth of $800 million which equals around 6,224,000,000 Ghanaian Cedi,

This makes Daniel MCKorley one of the richest and wealthiest men in Ghana.

Richest and Wealthiest Ghanaian Men in 2023

On the 5th spot we have the Irani brothers, these two brothers have achieved a lot together,

Basically, they produce two main products, which are bread flour and pastry flour.

Bread flour and pastry flour can be used for many things, arguably the most consumed commodity in this part of world,

Irani Brothers account for over 50% of the total marketshare when it comes to wheat flour production in Ghana,

Annually, the company imports about 180,000 metric tones of wheat used for milling into bread and pastry flour,

No other flour mill in Ghana has the capacity to continuously produce and export wheat in large quantities like them,

This means more revenue and competitive advantage for the Irani brothers.

The Irani Family is among the richest families in Ghana with an estimated net worth $850 million which equals around 6,613,000,000 Ghanaian Cedi.

We have another politician on the list of Richest and wealthiest People in Ghana,

It is non other than John Dramani Mahama, who was born on 29 November 1958 in Ghana.

John Dramani Mahama served as the president and Vice President of Ghana,

He is also a businessman, a philanthropist and an investor,

Interestingly, Mahama is the first vice president to take over the presidency from the death of his predecessor,

Again, he is the first head of state of Ghana to have been born after Ghana’s independence.

Mahama is also a communication expert, historian and a writer, so you can see that he’s very versatile,

Though he’s not in office anymore John Mahama has an estimated net worth of $900 million which equals around 6,930,000,000 Ghanaian Cedi.

3. Osei Kwame Despite Net Worth

Into the top 3 and right at the 3rd spot we have the Ghanaian Billionaire Osei Kwame Despite,

The Ghanaian entrepreneur was born on 2nd February 1962 in Agona Wiamoase, the Ashanti region of Ghana,

He is a philanthropist and a wealth creator, Osei Kwame has created jobs for thousands of Ghanaians through his business and investments in Ghana,

Osei Kwame Despite has a solid foundation in music creation and a good knowledge of the broadcasting sector,

He is currently the CEO of Despite Firm Ltd, a trade company with subsidiaries in the media industry,

Some of their subdivision includes but not limited to PEACE FM, OKAY FM and HELLO FM in Kumasi.

Osei Kwame Despite is currently among the richest men in Ghana with an estimated net worth of $1.1 billion which equals around 8,470,000,000 Ghanaian Cedi.

The complete legal name is “Samuel Esson Jonah”, he is the current chancellor of the University of Cape Coast,

Esson Jonah Samuel was born on the 19th November in 1949, he is a Ghanaian Businessman and the executive chairman of Jonah Capital.

Based on his income and investment in diffract sectors of the economy, Sir Sam E. Jonah is the 2nd richest man in Ghana,

In 1979 Jonah joined Ashanti Goldfields Corporation where he gained a lot of ground experience,

By 2009 he was already a non-executive director of Vodafone, his growth has been phenomenal.

In 2019 Jonah was elected a member of the National Academy of Engineering,

This came in recognition for his leadership and technical contributions in advancing and exploring the mineral industry in Africa.

Notably, on the international arena Jonah is a member of the advisory board of the London Business School,

All of these has contributed to prove the indisputable fact that Sam Jonah is one of the richest men in Ghana,

The name Kwame Addo-Kufuor is popular within and outside Ghana,

Kwame Addo-Kufuor is a Ghanaian politician who was born on the 14th July 1940,

He is also is a physician, multimillionaire and a business mogul,

Kwame Addo-Kufuor is among the top 3 richest men in Ghana with a very high estimated net worth according Forbes.

Similarly, Dr. Kwame Addo Kuffuor used to be a member of parliament for Manhyia,

In 2017 he was appointed as the Chairman of the Board of Trustees of the Social Security and National Insurance Trust (SSNIT),

Currently Kwame Addo-Kufuor has an estimated Net worth of $1.2 billion which equals around 9,240,000,000 Ghanaian Cedi.

The video below is about top 10 Billionaires in Ghana, watch and enjoy; 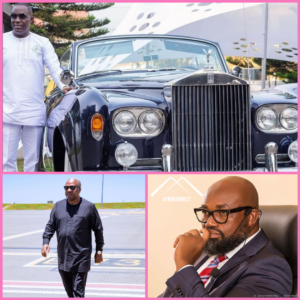 Ghana has a lot of millionaires and a few billionaires, in this article we covered the top 10 richest and wealthiest Ghanaian men,

To be honest, most of these richest Ghanaian people are into several businesses,

Most of them have paid their dues through hard work and dedication.

Good news here is that you can also achieve same or even greater height if you work towards that,

This brings us to the end of this article about the Top 10 Richest Men in Ghana in 2023 according to Forbes List via Afrokonnect.