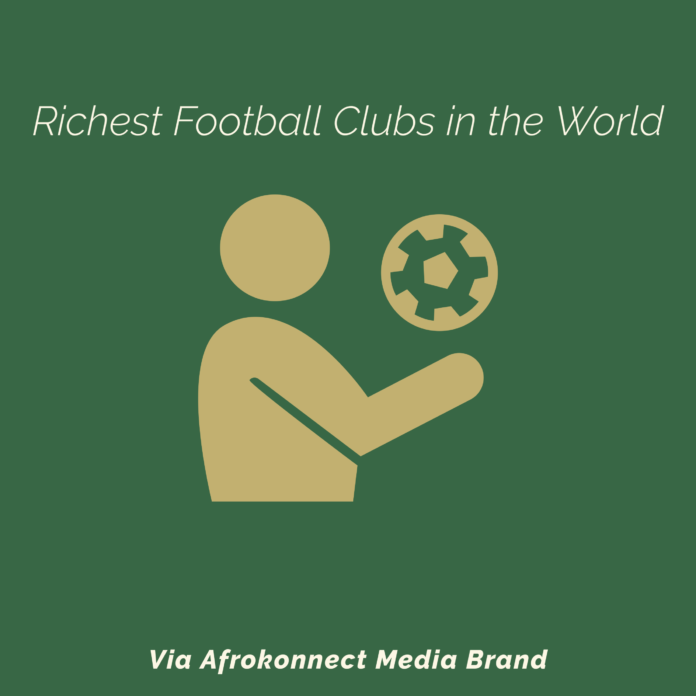 Welcome to this article about top 10 Richest Football Clubs in the World and their Net Worth in 2023 via Afrokonnect.

If you are a fan of football, you have probably thought about which teams and clubs throughout the globe have the most money.

In the following paragraphs, I will talk about the top ten wealthiest football teams in the world.

The sport of soccer is played by a great number of teams around the globe,

But only a select handful ever manage to achieve significant levels of success.

One of the games that has captivated the hearts of many fans, both men and women, is football, which is also known as soccer.

Many of these supporters worship their football clubs or players as if they were an idol.

They make an effort to maintain communication with their fan groups and to keep those fan clubs informed.

Nevertheless, here is an update on the 10 teams with the most wealth.

This information is up to date and may be trusted completely.

Richest Football Clubs in the World Based on Revenue in 2023

This list of the world’s wealthiest football teams was determined by looking at each team’s total revenue earnings from the previous year.

Including revenues generated on game days, via broadcasting, and also through commercial activities.

Spurs are still battling Chelsea and Arsenal in income, a battle for title of London’s wealthiest club.

Tottenham Hotspur was able to move up two spots into the top 10 wealthiest football teams,

Because of the income of 276.7 million that was generated through broadcasting.

The following is how much money was made:

Following Cristiano’s transfer to series A, the club saw an extraordinary uptick in the number of jerseys worn and sold,

As well as a rise in the value of the company’s shares.

Aside from what is popularly referred to as “the Ronaldo factor,” the five-time Ballon d’Or winner was successful in bringing considerably greater attention to both Juventus and the series A.

The Ronaldo factor contributed to a rise in income, which went from 64,8 million to 459.7 million as a result.

Because to this, the club moved up to the ninth spot on the list of the wealthiest clubs.

It is difficult for Chelsea to rank outside of the top 10 wealthiest football clubs,

Despite the fact that the team was sd by Roman Abramovich, a Russian billionaire because of sanctions against him.

Currently, the club is owned and controlled by American billionaire, Todd Boehly.

Due to the fact that the income had not improved, Chelsea fell to 8th position.

It is expected that the income will be from:

Liverpool was victorious in the most prestigious club competition in Europe.

If the present league is continued, there is a good possibility that they will still end up winning the title.

The following constitutes the club’s income:

The results showed that Paris Saint-Germain (PSG) was the fifth club in terms of the most income earned.

The presence of players of Kylian Mbappe’s caliber and Neymar’s has been of tremendous benefit to the club.

Commercial transactions are the primary contributor to the prosperous income profile of PSG.

The club has two of its most lucrative partnerships with Nike, which are with the company’s technical gear provider and its shirt sponsor, Emirates.

This was a significant improvement for the French club, as Paris Saint-income Germain’s grew to approximately 100 million marks.

The following is how the income is distributed:

It all came to a disappointing conclusion after the club has been struggling to find its path,

The football club has dropped to the fifth place on the list of the wealthiest clubs,

Which is the first time in a great number of years that this has occurred.

Despite this, Red Devils continue to be the most financially successful football team in England.

A total of 51.5 million euros’ worth of income was brought in by the club over the previous year.

The enormous financial situation of the club in 2018,

Which was obtained from the club’s commercial partnerships with Adidas, was pulled from the income profile.

The company has a sizable deal with Adidas to provide uniforms and re-enter the Champions League this year.

Because of this, the total income increased by up to six percent.

Revenue at the Spanish club is up 10% year over year. With that extra 10%, they were able to pull ahead of the competition.

Barcelona, a team of giants, has won the Spanish championship eight times in the last eleven years.

Furthermore, they progressed and won to the Champions League severally,

Over the course of the last few years, Barca continued to see an increase in income.

This has been made possible, in part, by well-known football players like Ansu Fati, Pedri, amongst others,

As well as supporters from all over the globe who have shown their support.

There are a lot of football fanatics on Facebook alone, with over 100 million people like the page.

The Bundesliga Monsters have racked up the most victories of any football club in the history of German football.

Bayern hold the record for most national championships won, and they also have 19 national cups to their name.

The significant performance of the Giants in the domestic league contributed to an increase in Bayern Munich’s revenue.

Bayern Munich is now the fourth wealthiest club in the world after reporting revenues of 630,1 million euros.

In addition, the football team has a significant number of supporters, which may reach an average of 75,354 people.

According to the amount of fans that regularly see Bayern play at their stadium, this is accurate.

It would seem that this club has been dealt a significant blow as a result of the absence of their most important player, Cristiano Ronaldo.

However, Real Madrid have been surviving and winning without Ronaldo,

In addition, this helps to ensure that the income continues to rise.

Additionally, Real Madrid is regarded as having one of the finest football teams in all of Europe.

We have high hopes that the club will get back on the path to success that it has always been on for the many years.

1. Manchester City is the Richest Football Club in 2023 with a Revenue worth 680.6 million Euro 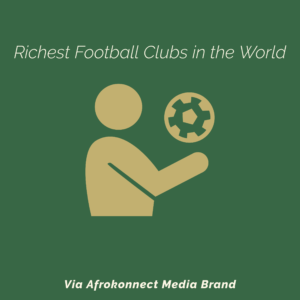 The wealth of Manchester City’s football club is second only to that of Real Madrid.

In the previous fiscal year, the English club had a rise in income of 42,2 million.

The fact that Manchester City Football Club has been victorious in the English Premier League (EPL) without champions League,

Did not prevent the club from claiming the number one spot,

From its previous third-place ranking to first place on the list of the world’s wealthiest clubs.

Recent income for the club of around 42.2 million Euro was generated by major TV agreements, home game attendance of 54,054 people,

Which provides technical clothing, and Etihad Airways, which is the shirt sponsor.

In addition, a new kit contract has been reached with the Etihad management,

Who are said to be making an investment of over 500 million dollars in Manchester City.

Naturally, a transaction of this magnitude involving a backed-up football club would set a new record.

The following categories make up the total revenue:

Richest Football Clubs in the World in 2023

The money that the football clubs produced has either grown or reduced when compared to the previous year’s totals.

On the other hand, the level of income that each football club now enjoys served as the determining factor for where it landed on our list of the wealthiest soccer teams in the world.

That wraps up all you need to know about the wealthiest football teams in the world.

10 Cheapest European Countries to Visit or Live in 2023

How to make money with NFT in 2023 (Non-Fungible Token)