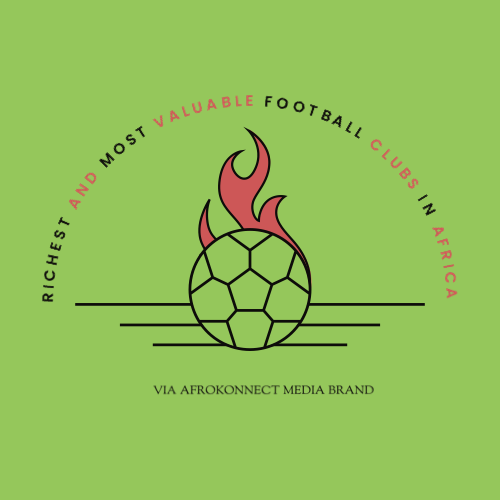 Welcome to this publication about the Top 10 Richest and Most Valuable Football Clubs In Africa for the year 2022 via Afrokonnect.

The popular sport called “football” in Africa and around the world is still quite lucrative,

Even though there aren’t any African teams who are known internationally and participate in tournaments like the Uefa Champions League.

This article will provide a list of the top ten most valuable and wealthy football clubs in Africa,

Along with an estimate of how much each club is now worth.

The following is a list of Top Ten Wealthiest Football Clubs in Africa and the Approximate Value of Each Club;

The Al Ahly Sporting Club, more generally known simply as Al Ahly, is a professional sports club in Egypt that has its headquarters in Cairo.

In African football, it is often referred to as “The Club of the Century.”

On 24 April 1907, the Al Ahly Sporting Club opened its doors as a meeting place for student unions in Cairo.

Today, it is the most decorated football club in Africa, having won a total of 57 titles.

Following in Real Madrid’s footsteps as the most successful club in the world in terms of the number of international trophies won (20),

Al Ahly is the second most successful club in the world overall.

When it comes to international tournaments, the club has a record number of victories:

And also a bronze medal from the 2006 FIFA Club World Cup.

It is believed that the club of Al Ahly is worth a total of $28 million.

On January 7, 1970, the club was established, and it has since grown to become one of the most well-supported clubs in all of South Africa.

Phefeni Glamour Boys is another name for the club,

Which is also known as Amakhosi, is a Zulu word that meaning “Lords” or “Chiefs.”

The club has almost 50 club trophies and has won 12 league championships overall,

Four of which came during their time in the Premier Soccer League (PSL).

In terms of total trophies, the club has the best record of any PSL club (Premier Soccer League).

The FNB Stadium is the venue for all of Kaizer Chiefs F.C.’s home games,

It is believed that the Kaizer club is worth a total of $23 million.

The organization’s first name was Al Assiouty Sport, and it was established in the city of Assiut in the year 2008.

Prior to its acquisition by Emirati billionaire Salem Al Shamsi on July 4, 2019,

The club was owned by Saudi Arabian sports authority chairman Turki Al-Sheikh (who changed the team’s name to Pyramids FC in 2018).

It is believed that the Pyramids club is worth a total of $22 million.

The most well-known and successful club in all of Tunisia is the Tunisian establishment known as Club Africain,

Founded on October 4, 1920, they were the first Tunisian club to win an international trophy,

When they took home the Maghreb Cup Winners Cup in 1971.

Additionally, the team has won 13 league championships in Tunisia as well as 13 cup victories in Tunisia.

It is believed that the Africain club is worth twenty million dollars ($20).

On January 5, 1911, the Zamalek Sporting Club, more colloquially referred to as simply Zamalek, was established.

Located in Giza, Egypt, the club is a prominent Egyptian sports organization.

Zamalek was the first Egyptian team to ever win a trophy.

The fact that Zamalek has won five championships in the CAF Champions League, one win in the CAF Confederation Cup, four titles in the CAF Super Cup,

And one trophy in the African Cup Winners’ Cup makes them one of the most successful teams in Africa.

It is believed that the value of the Zamalek Sporting Club is $18 million.

The Orlando Pirates Football Club is a professional football team from South Africa that plays its home games in the Houghton neighborhood of the city of Johannesburg.

The football club that is more often referred to as Pirates was established in 1937,

It now competes in the Premier Soccer League, which is South Africa’s highest level of football competition.

It wasn’t until the 2010–11 and 2011–12 seasons that Orlando Pirates became the first team in the history of the Premier Soccer League to win three major trophies in a single season on consecutive occasions.

These accomplishments were accomplished during the 2010–11 and 2011–12 campaigns.

Orlando Pirates are also one of just two South African clubs to have ever won the CAF Champions League, which they did in 1995.

The value of the Orlando club is roughly calculated to be $15 million.

The Wydad Athletic Club, often known as Wydad or WAC, is a Moroccan sports club that was established on the 8th of May, 1937.

Its headquarters are located in the city of Casablanca, which is located in Morocco.

And 1 Independence Cup have been won by the club during the course of their history in Morocco.

Two CAF Champions League titles, one CAF Cup Winners’ Cup, and one CAF Super Cup are only some of the continental titles that this team has won.

The value of the Wydad AC football club is believed to be 11 million dollars,

It is widely regarded as one of the most successful and successful football teams in both Morocco and Africa.

Originally established in 1938 under the name FC Saint-Georges, the Tout Puissant Mazembe football club is now situated in Lubumbashi, the capital city of the Democratic Republic of the Congo.

Tout Puissant Mazembe is the most successful team in the Democratic Republic of the Congo,

Having won a combined total of 36 titles at both the national and international levels.

After their victory against Internacional de Brazil in the semifinal of the 2010 FIFA Club World Cup,

The club gained a lot of notoriety on the world stage.

It is believed that Tout Puissant Mazembe has a value of 11 million dollars.

The 15th of January 1919 marked the beginning of operations for the sports club known as Espérance Sportive de Tunis,

Which is located in Bab Souika in the city of Tunis in the country of Tunisia.

A total of 48 domestic trophies were won by Esperance, more than any other Tunisian football team,

Making them the most successful club in Tunisian history.

They have won 12 trophies overall, eight of which were organized by the Confederation of African Football,

It is believed that the club is worth a total of $11 million. 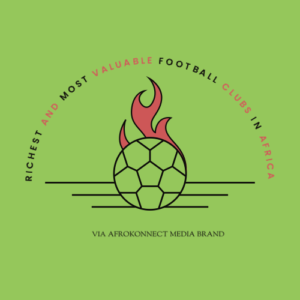 It was established on the 7th of August, 1921 as Mouloudia Chaàbia d’Alger and has its home base in Algiers.

In 1976, MC Alger became the first Algerian club to win a continental competition when they took home the trophy for the African Cup of Champions Clubs.

Since then, they have gone on to become one of the most successful Algerian clubs,

It is believed that the club is worth ten million dollars ($10 million).

So there you have it, the wealthiest football teams in Africa have been listed for you,

We must also give credit to clubs like the Kano Pillers and Eyimba of Nigeria,

They are top teams that have produced great players over the years. However, this list is only for the richest clubs.

Let us know what you think via the comment section if there’s any rich football club in Africa we have skipped.

On that note, this brings us to the end of this article about the Top 10 Richest and Most Valuable Football Clubs In Africa for the year 2022 via Afrokonnect.

HOW TO GET YOUR NIGERIAN NATIONAL ID CARD (NIMC) ONLINE