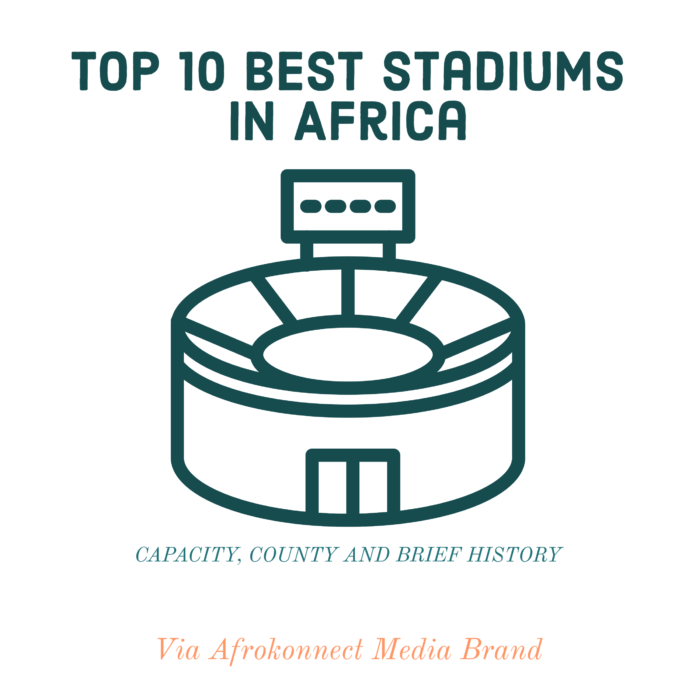 In this page you will discover the Top 10 Best Stadiums in Africa for the year 2023 via Afrokonnect.

Do you ever find yourself wondering which African nation boasts the continent’s finest stadium?

We will be discussing the top stadiums in Africa in this article, so stay tuned for that!

What You Need to Know About African Stadiums

Over 50 stadiums of varying sizes, architectural designs, and seating capacities can be found in Africa.

These venues are known as stadiums and are used by people to watch sporting activities, most notably football, as well as concerts and other events.

All spectators will have a clear view of the play area because of the way they are built.

Many stadiums on the African continent are up to international standards and can hold major international competitions and events,

Structures of the stadiums as well as their capacities will be taken into consideration as we rank and assess the top stadiums in Africa today.

The following is a list of the top best stadiums in Africa,

Ranked according to their capacities as well as their available facilities, structures, aesthetics, and comfort levels.

At the moment, the First National Bank Stadium, which is also called the Soccer City Stadium, has the title of best stadium in Africa.

The FNB is the largest venue in terms of capacity, with a total of 94,736 seats available.

Construction on the stadium began in 1987, when it had an initial capacity of 80,000 spectators and was situated in Johannesburg, South Africa.

After some time, it underwent extensive renovations that brought its capacity up to where it is today,

At that point it became the largest stadium in Africa and one of the best.

In addition to playing host to a variety of important events, including political, sporting, and cultural gatherings,

FBN is primarily utilized by the Kaiser Chief FC, which is regarded as one of the best football teams in South Africa.

There have been several significant events held at FNB,

Such as the 2010 FIFA competition, the CAF African Cup Nations, Nelson Mandela’s first significant appearance, and many more.

The Borg Al-Arab Stadium is the next stadium in our list of the top best stadiums in Africa.

It has a capacity of 86,000 people. The actual location of the stadium may be found in Alexandria, which is in Egypt.

There are a variety of events that take place in this stadium, which is also the largest stadium in Egypt.

For example, it has hosted the Pharaoh, the Egyptian national team, major sports, and track and field competitions.

The Borg Al-Arab Stadium is equipped with a wide variety of facilities,

Such as enough lighting, changing rooms, bathrooms, air conditioners, and so on,

Which contribute to the venue’s high level of convenience and conformity.

As a result, it is considered to be one of the best stadiums in all of Africa.

The Moses Mabhida Stadium is a beautiful venue that boasts a quality playing field as well as first-rate amenities.

It was named after a well-known politician in South Africa.

It is one of the top stadiums in Africa since it has provisions for passenger terminals as well as parking stations for fans,

Making it one of the best stadiums in the world too.

A staggering figure of $440,000 was spent on the construction of the stadium,

Which can easily be found in Durban, in the country of South Africa.

The impressive number of 56,000 people may be accommodated inside the Moses Mabhida Stadium.

Cape Town Stadium, in Cape Town, South Africa, is widely regarded as one of the continent’s top venues.

With a capacity of 69,070 spectators, the stadium is ideal for hosting large-scale sporting events such as football and rugby.

Before being reconstructed in 2007 to handle the number of people it can now hold,

It had an initial capacity of 18,000 people when it was first erected.

In the years thereafter, it has played host to numerous professional football teams and clubs.

Only a handful of the world’s largest stadiums can be found in Africa, but Cairo International Stadium is one of them.

The enormous, multi-leveled auditorium that is situated in Cairo, in the Egyptian country of Egypt, has a capacity of 74,100 people.

Due to its location in Naseer City, the stadium goes by the nickname “Naseer Stadium” as well.

If one were to compile a list of the continent’s top stadiums,

It would be impossible to do so without including the Abuja National Stadium, which is located in Nigeria.

A total of 60,491 people were able to find space within the enormous building with multiple levels.

Events of national, state, and even international significance are held there.

The stadium was built at a cost of 369 million dollars and features a plethora of unique amenities,

Which combine to make it comfortable and convenient to use.

Another one of the best stadiums in Africa is this one, and it was named after a prominent African Legend.

The Nelson Mandela Stadium, which has a capacity of 48,459 people and is geographically located in Port Elizabeth in South Africa, was named after the former South African president.

Despite the fact that it has never had more people in it than that,

During the 2010 FIFA World Cup an additional 4,000 temporary seats were added so that it could accommodate more people.

The Nelson Mandela Bay Stadium offers a variety of enticing amenities in addition to a conventional playing field.

While you are still here, check out the top 10 Richest Football Clubs in Africa at the moment.

In Luanda, Angola’s capital city, the stadium in the Belas Municipality may provide seating for up to 50,000 people and can be found in its actual location.

The date Angola gained its independence from Portugal is commemorated in the stadium’s name.

It has played host to a large number of important national events including political gatherings, sporting competitions, and gaming tournaments.

This stadium was the location of the 2010 African Cup of Nations competition.

Have you ever heard of the Peter Mokaba Stadium, which is an enormous and spectacular facility?

A stadium in the South African city of Polokwane.

The sports venue was given its current name in honor of a prominent figure from South Africa.

Peter Mokaba Stadium, which has a seating capacity of 46,000, plays host to a wide variety of important events and activities,

Including football and rugby matches, as well as training for various teams.

The Mbombela Stadium, which can be found in Nelspruit, South Africa, is the last but certainly not the least on our list of the top best stadiums in Africa.

It has a massive capacity of 40,929 people and is built in the shape of an open rectangle with rounded corners.

Spectators from all around the world come to Mbombela Stadium to take in a variety of sporting events,

Including athletic competitions, cricket matches, and other types of sports. 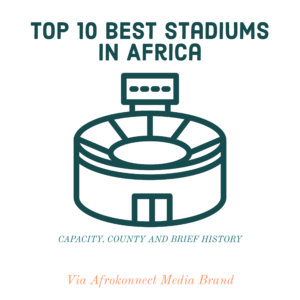 Which stadium is the best in Nigerian 2023?

Uyo’s Akwa Ibom International Stadium is regarded by many as the best stadium in Nigeria at the moment,

Uyo, the city that serves as the state capital of Akwa Ibom, is home to the Akwa Ibom International Stadium,

A national sports venue that features seating for all spectators.

The stadium is used as a venue for a wide variety of social, cultural, and religious gatherings in addition to being the home of the Nigerian Super Eagles football team.

What are the 5 biggest stadiums in Africa in 2023?

It is important to note that the list does not include many African stadiums that are among the best and largest in the continent,

Examples include Stade 5 Juliet Stadium, which has a massive capacity of 64,000 people,

There is no doubt that the African continent is endowed with a great number of stadiums;

Nevertheless, due to the limitations of our list, we will only be mentioning the very greatest of them.

Do you have any experience visiting stadiums like these?

Please feel free to share your ideas with us in the comments section, and many thanks in advance!

On that note, this brings us to the end of this article about the Top 10 Best Stadiums in Africa for the year 2023 via Afrokonnect.

Buju Banton Net Worth in 2023 and Biography

Top Recruitment Agencies in Nigeria and their Contacts 2023