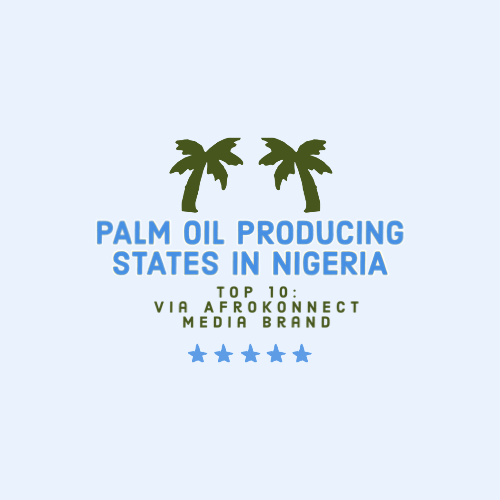 This page is about the top 10 largest and highest Palm Oil Producing States In Nigeria for the year 2022, via Afrokonnect.

Have you been wondering which state in Nigeria is responsible for the production of the most palm oil?

We present to you a list of the states in Nigeria that are most prolific producers of palm oil in case you’ve been thinking about that topic.

A new study that is now being conducted has showed that Nigeria generates at least 7% of the amount of palm oil that is produced in the globe.

Keep in mind that there are several states in Nigeria that made this possible,

But not much attention is brought towards them.

Historically, Nigeria has been one of the continent’s leading palm oil producers.

However, the country’s focus has shifted to crude oil since its discovery, mostly due to the rapid cash it generates.

Though palm oil is still produced in many states in Nigeria;

In fact, more than half of the states in Nigeria produce palm oil;

However, for the sake of this article, we have chosen the top 10 palm oil-producing states in Nigeria.

The states that are mentioned below as the top 10 producers of palm oil are those that are regarded as the greatest producers,

Meaning that they generate bigger amounts, and as a result, they are the primary states that produce palm oil.

This list is arranged from the state with the most palm oil production to the one with the least.

We have chosen the palm oil-producing nations, together with their production output and everything else that ought to be known about each of them, with the purpose of providing a great deal of clarity.

The majority of these states are working extremely hard to keep their current ranking,

While the states that are lower on the list are attempting to improve their overall production.

The following is an exhaustive list, without further ado, of the top 10 palm oil-producing states in Nigeria;

Akwa Ibom is a lovely state that is teeming with excellent people who also put in a lot of effort to get things done.

Because of their efforts, Akwa Ibom is one of the leading palm oil-producing states in Nigeria.

Since Akwa Ibom is situated in the tropical area along the coast of the southern part of Nigeria,

It is an ideal environment for the cultivation of cash crops;

The people of Akwa Ibom produce a significant quantity of these goods.

As a result of the hospitable climate and the fact that this actually lends support to the development of these crops,

The people of Akwa Ibom are actively doing well in the vast production of palm oil. Fortunately, the climatic conditions are also good.

Natural resources abound in the state of Akwa Ibom, which includes the largest crude oil output in Nigeria,

As well as glass sand, limestone, rice, cassava, and other agricultural products.

Cross River state, which is located in the South-South area of Nigeria,

Is home to vegetation that is well suited for the cultivation of palm oil and is one of the states that makes up this region.

Calabar is the capital of the state, which shares a border with Cameroon and is the name of the state’s largest city.

It is common knowledge that the people of Cross River are very hard workers,

And they have a deep love and appreciation for farming.

Coupled with the fact that Cross River state is rich in crude oil,

The state is not at a disadvantage when it comes to other things that have the potential to bring in revenue for the state.

Over the last several years, Cross River State has generated over 200,000 metric tons of palm oil,

The state has over 360,000 hectares of land dedicated to the cultivation of palm oil, using local farmers to produce at massive scale.

The soil and vegetation of Rivers State are particularly appropriate for planting,

The state is one of the top 10 in Nigeria in terms of palm oil production because of its abundance of natural resources and proximity to water.

Aside from crude oil, there are other things that can earn money for residents of Rivers State and indirectly generate income for the country as a whole,

Rivers State is the sixth most populous state in Nigeria.

The primary source of internally generated revenue (IGR) for the state is also crude oil.

Additionally, Rivers state is one of the leading producers of palm oil in all of Nigeria.

The Etche and Ikwerre local government areas are the only ones in Rivers state where palm oil is produced,

Despite the fact that the production of palm oil is carried out in every single portion of the state.

Abia state is the most productive state in terms of palm oil production in the South Eastern area.

Along with a great deal of palm kernel, putting it on the fourth rank among the largest producers of palm oil.

The production of cashews, plantains, cocoa, rubber, and a great many other goods in Abia state has significantly contributed to the increase of the state’s internal revenue.

As a major agricultural region in Nigeria, Edo State is also a major source of palm oil for the country.

Positioned in Nigeria’s central-western area, the state is a major economic and political hub.

Because of the excellent weather conditions that allow for a high output of agricultural goods,

The state government of Edo has made plans to create the Edo Oil Palm Initiative.

To get the initiative off the ground, 51 hectares of land were given to the cause.

Almost all of this work was completed before the current boom in palm oil production in the state.

The state of Ondo, which can be found in the south-western part of Nigeria, is endowed with a large number of natural resources in addition to its abundance of crude oil.

In terms of palm oil production, Ondo state is consistently ranked among the top 10 states in Nigeria.

Akure, the capital of Ondo, is the economic hub of the state,

Ondo is the leading cocoa producer in Nigeria, and the city of Akure serves as its commercial hub.

The majority of the state of Ondo’s income comes from agricultural products.

However, Ondo is also one of the states that make up the Niger Delta,

Which simply means that it is a state that produces oil (crude oil), although in a very small amount.

In addition to being a producer of palm oil, the states that make up Ondo are also noted for their production of other types of agricultural goods,

Such as a variety of fruits and vegetables, cassava, taro, coffee, maize, rice, and yam.

The city of Owerri serves as the capital of the state of Imo, which is situated in the south-eastern part of Nigeria.

We have to give thanks to the administration of Imo State for making it possible for the state to be one of the major producers of palm oil in Nigeria.

This accomplishment would not have been possible without their efforts,

In order to facilitate a quicker and more extensive production rate,

The government provided farmers with specialized agricultural equipment as well as a palm oil processing facility.

It is possible to credit Delta State’s status as one of the largest oil producers in Nigeria to the climate and vegetation of the state,

As well as to the fact that Delta State is bordered on all sides by water.

Farmers in Delta state, who have received a lot of help from the state government,

Are showing no signs of stopping the work that brings them the most joy.

The state has been allocated 1.2 million acres for palm oil production,

With backing from the Central Bank of Nigeria (CBN), the goal of boosting employment and prosperity in Delta and contributing to the country’s coffers.

Delta has an oil palm mill (WJICY) that is a semi-mechanized palm oil mill to increase palm oil output in the state,

And Bayelsa State is also among the top palm oil producing states in Nigeria.

From the beginning, it has been established that this state is a producer of palm oil, 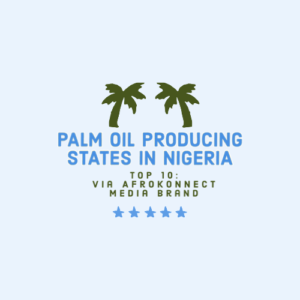 Anambra state is not excluded from this discussion as the state that produces a significant amount of palm oil.

The products that the state manufactures are intended for sale,

It is well known that Anambra state is one of the most developed states in the South Eastern area of the nation.

Additionally, Anambra state is a state that has a strong appreciation for agricultural methods.

Because of the state’s favorable climate and vegetation,

Which have been a top boost for production in the state, and support from the state government,

Anambra state has made it onto the list of top palm oil-producing states in Nigeria.

The state boasts thousands of hectares of land for the production of cash crops, which includes palm oil.

The video below documents how the biggest palm oils companies make and produce;

Palm oil is widely used in Nigeria, particularly in the creation of our traditional meals.

The fact that it also has therapeutic properties contributes to the widespread acceptance of palm oil throughout the nation.

Value of palm oil is not limited to Nigeria; it is highly valued throughout Africa and the rest of the globe.

But, owing to the production of palm oil, the nation has another source of revenue if the price of crude falls.

This has been a positive development for the economy of Nigeria.

Palm oil production is a highly profitable business opportunity for people who are prepared to start the company,

Since there is a high demand for it and production has not been able to fulfill the demand up to this point.

In addition to its usage in the food industry, palm oil may be refined into a variety of different products that have a variety of applications.

These include cosmetics, toothpaste, shampoo, and detergents, as well as a cleaning agent.

We hope that you have gained a better understanding of the significance of palm oil,

Both in terms of its applications and its impact on the economy.

If so, please help us spread the word by using one of the social media sharing icons provided below.

TI Blaze Biography, Career, Songs, and Net Worth in 2022

Top 10 Richest Musicians in Kenya and their Net worth

How to Apply and Activate Nigeria Jubilee Fellows Programme Account