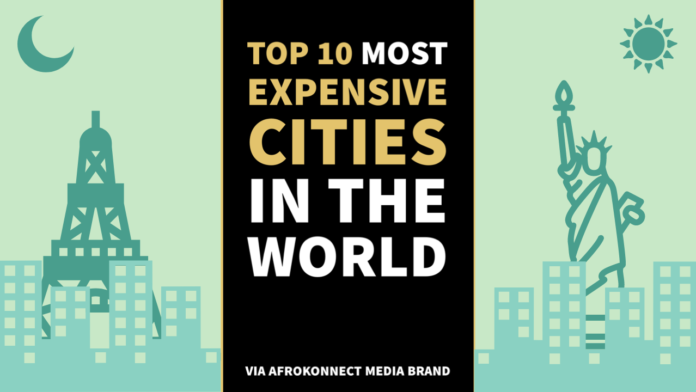 This article is about the top 10 Most Expensive Cities to live In The World and the costliest city in 2023 via Afrokonnect.

Where can you find the highest cost of living?

The EIU ranks over a hundred cities worldwide and examines the cost of consumer goods around the globe to determine which locations charge the highest prices.

At the moment, the amount of money required to maintain one’s standard of life in these locations plays an important part.

Today, we have done the research and taken the time to unveil the top 10 most expensive places in the world to live in.

If you have been curious about the identities of these locations, you will not be disappointed.

The following is a list of the top ten most expensive cities to live in, As determined by the Worldwide Cost of Living study.

This study, which took into consideration the effects of COVID-19,

And also made reference to the prices that have recently been reported internationally, determined this list.

Two cities in Europe and one city in Asia are tied for first place on this list, each of which has a score of 100.

We are talking about Paris, the lovely capital of France,

These three cities have become the most expensive places on the earth to live.

Because of the appreciation of the euro in comparison to the dollar,

Cost of living in Western European cities like those listed above has increased to a greater degree,

Than in comparable locations in the United States of America, Africa, and Eastern Europe.

To further understand, you can read more about the Average cost of living in Europe.

The city of Singapore, which has consistently been listed among the most expensive in the world has dropped down this list,

As a result of an exodus that took place when a huge number of employees left the city because of the epidemic.

This caused the city’s ranking to drop. In point of fact, according to the study for 2019, Osaka, Hong Kong, and Singapore shared top position.

Hong Kong is the only one of the three that still maintains such a status in the modern day.

You can read more detailed information about the Cost of Living in Singapore in terms of Rent, Food and Transportation.

Tel Aviv, the city that serves as Israel’s capital, moved up in the rankings for each of those positions in the previous year.

High expense of both public transportation and private automobiles is a significant contributor to the rise in the overall cost of living in this location.

The cost of living has decreased in Osaka (Japan), one of the cities with the highest prices in the world,

As a result of the government implementing steps such as subsidizing public transport.

Osaka was formerly one of the cities with the highest prices in the world.

A significant number of apparel retailers went out of business, which contributed to a general decline in the pricing of related goods in this industry.

Nevertheless, the cost of purchasing a computer, for instance, is still among the highest.

However, it is also true that, on a general basis, the rise in prices of items with high demand, as is the case, grew in most places.

Well, Europe is not all about expenses, here are the 10 Cheapest European Countries to Visit or Live.

Most Expensive cities in the world to live in 2023

Following that is the city of Geneva in Switzerland, followed by the city of New York in the United States.

When it comes to living expenses in times of epidemic, another European city has made it into the top 10 of the world’s most costly cities.

In order to carry out the reference report, the cost of living in New York has been used as an average to compare the remainder,

Which results in a classification that is lower by three spots compared to the ranking from the previous year.

Tehran, the capital of Iran, ascended no more than and no less than 27 spots throughout the year 2020,

Making it the city that advanced the most positions overall,

Despite the fact that it does not feature among these initial findings.

This reality was brought about as a result of the many sanctions that the United States of America put on the nation,

Which had the effect of disrupting the supply of commodities and, as a direct result of this, led prices to rise in a general sense.

Another city from Europe and one from North America are tied for points and placements this time around,

We refer to Copenhagen (Denmark) and Los Angeles (United States).

The first of these places stands out not only due to the cultural and recreational opportunities it provides,

But also due to the fact that shopping there is among the most costly it can be anywhere in the globe.

And that is that, just as it is happening this year with the rest of the major cities in Europe,

The capital of Denmark moved up two spots in comparison to the previous year.

Regarding the city of Los Angeles, which serves as a constant reminder to everyone of the Hollywood stars and artists that call the city home,

Los Angeles continues to rank among the cities with the highest cost of living.

It should not come as a surprise that this city is one of the most expensive places to live on the planet,

When one considers that it is home to the world-famous Beverly Hills and that a square meter of land there costs approximately 7,500 dollars,

As it is consistently ranked among the top cities in the world for property values.

Paris in France is now the most expensive city in the world at the moment;

However, we do not anticipate that this city will continue to hold this position during the next year;

Nevertheless, who knows, it could continue to hold the position. 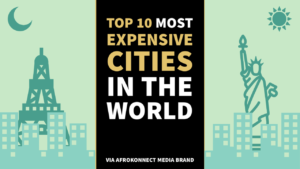 Tobacco products and consumer electronics have seen the highest percentage increases in price as a whole,

This is mostly attributable to the altered living conditions and routines that have been brought about as a direct result of the epidemic.

On the other hand, the textile industry has been one of the sectors that has been hit the worst,

As both its sales and its prices have fallen precipitously in recent times.

Before you leave, here are the 10 Largest and Safest Cities in United States you can check out,

This brings us to the end of this article about the top 10 Most Expensive Cities to live In The World and the costliest city in 2023 via Afrokonnect.

10 Best Loan Apps in Kenya for Instant Loans (No Collateral)

Quick Online Loan apps in Nigeria without Collateral in 2023