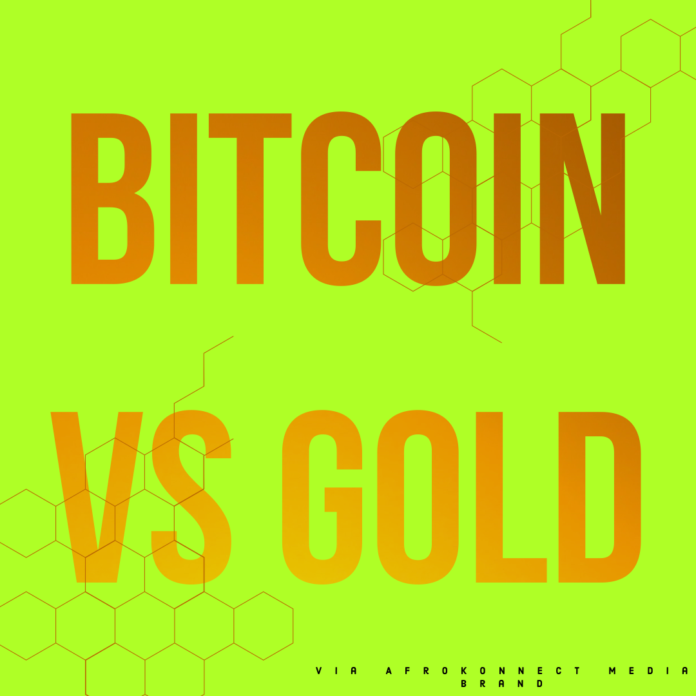 Bitcoin Vs Gold: Everything you need to know about the investment via Afrokonnect.

SOME INVEST IN BITCOIN; OTHERS PREFER TO PLAY IT SAFE WITH GOLD,

Bitcoin and cryptocurrencies are still on everyone’s lips.

Firstly, let’s explain what this digital currency is, how it works and how to invest in bitcoin in 2023.

How safe is it to invest in bitcoin

Digital currencies emerge as an alternative to traditional Fiat currencies,

Today, they have their maximum exponent in bitcoin.

Cryptocurrency has become one of the best long-term investments (full of risks, of course).

Someone who had invested 1,000 dollars in 2010 today would be a millionaire.

Therefore, this will always be the question, how safe is it to invest in bitcoin?

Cryptocurrencies operate with their own codes, blockchain technology;

It is almost impossible to duplicate transactions or produce fake cryptocurrencies,

From this point of view, it is safe to invest in bitcoin.

And currently, what is the capitalization of bitcoin?

In October 2021, the market capitalization of the cryptocurrency bitcoin reached a new record in its trading history, exceeding 1.15 trillion US dollars.

People are just hesitant to invest because they don’t know if cryptocurrency gains have to be taxed.

How to invest in bitcoins in 2023: Bitcoin Vs Gold

Another formula to get bitcoins is to invest in digital currencies,

In other words, speculate with the cryptocurrency as we would with gold, oil, or any other action.

The question of a thousand loaches How to buy bitcoins?

To purchase bitcoins, just go to one of the bitcoin buying platforms like Luno, Binance amongst others.

For those who already invest in the stock market, its operation will be similar, somewhat different from that of a broker.

These platforms are called bitcoin exchanges.

Within these exchanges, we find, as extra security, bitcoin wallets or purses.

There are different types of bitcoin wallets based on issues such as security and usability,

On the one hand, we find the physical bitcoin wallets, which through software, we can download on our computer and then have them on a USB memory.

On the other hand, online wallets found within an exchange platform are encrypted for greater security.

Thus, even if the platform fell, you would still have your bitcoins safe.

Bitcoin Vs Gold: Which is a better Investment?

Now some buy Bitcoin, and others go back to gold:

Palantir, a data analysis company, has decided to bet on gold, investing in bullion worth more than 50 million dollars.

Palantir, which has seen massive sales growth during the pandemic with its government surveillance software, has $2.3 billion in cash.

They are exploring new ways to use this money and move it with this.

Apart from buying gold bars, they have also invested in other companies, and it even seems that they have bought Bitcoin.

In a situation in which the US dollar, for whatever reason, loses much of its value, hypothetically, companies will seek to be prepared.

Alternatives like Bitcoin seem evident for a digital future.

However, others prefer to go back to the traditional, which has been a safe value for millennia, such as gold.

According to Javier Molina, for whom bitcoin is the new gold of the millennials,

It does not work as a payment currency, as it happens to gold; in addition, as the precious metal, it is scarce.

But it has advantages for the new generations compared to gold.

Since the cryptocurrency should not be deposited anywhere, you can have it on your computer.

Thus, bitcoin now plays more of a role as a store of value like gold, beautiful to younger people.

Bitcoin is believed to be gold 2.0.

Is it better to invest in Bitcoin or gold?

Gold vs. Bitcoin as a long-term investment what do the experts think?

Currently, cryptocurrency is more expensive than an ounce of gold, so it could be representing an attack on gold in the future.

Bitcoin remains the riskiest but most rewarding digital asset.

Here’s what industry experts have to say about the two asset classes.

However, the most versatile digital asset is gaining ground on gold.

Bitcoin has seen its popularity rise in the last ten years.

Bitcoin’s volatility is five times that of gold.

In addition, they claim that the day that Queen Elizabeth exchanges the five pounds of gold in her crown for cryptocurrencies will be the day that the digital economy will change course.

FAQ – Bitcoin Vs Gold which is better and Safer investment 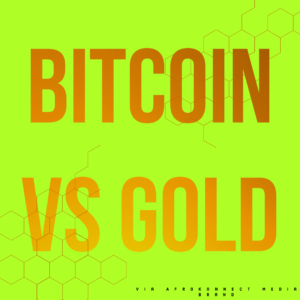 Is gold safer than Bitcoin?

When it comes to safety both Bitcoin and Gold are considered to be safe investments,

Cryptocurrencies are decentralized,  operating with their own codes and blockchain technology,

This makes it impossible to duplicate transactions or produce fake cryptocurrencies.

More so, in terms of legality, transparency and safety, gold edges a little bit above cryptocurrency,

For example, in some countries it is illegal to transact with Bitcoin,

Nigeria is one of the countries that have banned all cryptocurrency transactions earlier.

Another factor to consider in terms of safety between Bitcoin and gold is Liquidity and Volatility,

When it comes to Liquidity both Bitcoin and gold are considered to be good enough,

However, their volatility isn’t the same, here Bitcoin edges above gold in terms of volatility,

According to research facts Bitcoin’s volatility is five times that of gold,

Making Bitcoin the most riskiest but most rewarding digital asset in the world.

Can you buy Bitcoin with gold or buy Gold with Bitcoin?

Straightforward answer, Yes you can buy Bitcoin with gold and also the other way round,

Gold is a precious metal with a finite amount on this Earth, which is what makes it extremely valuable.

To buy Bitcoin (BTC) with Gold all you need to do is create an account with third party channels like Paxful,

Paxful makes it easy and secure for you to buy and hold Bitcoin,

There are other amazing platforms you can download on Play store or App Store through which you can also use to buy Bitcoin with Gold or buy Gold with Bitcoin,

Platforms like OneGold, Safari Bullions, CapsGold Spot among others are secured and allows you to invest in Gold.

The video below is about the Bitcoin vs Gold debate,

Watch and enjoy the different views and perspectives of industry voices;

It is necessary to update our finances and the way we see emerging economies; therein lays the secret of the future of the world economy.

Mainly, educating ourselves on the subject is fundamental; taking action will happen on its own, and that is where we will see the results of such a prodigious digital tool as bitcoin.

Dua lipa Biography, Awards, Career and Net worth in 2023

Helen Paul Biography, Early Life And Net Worth in 2023