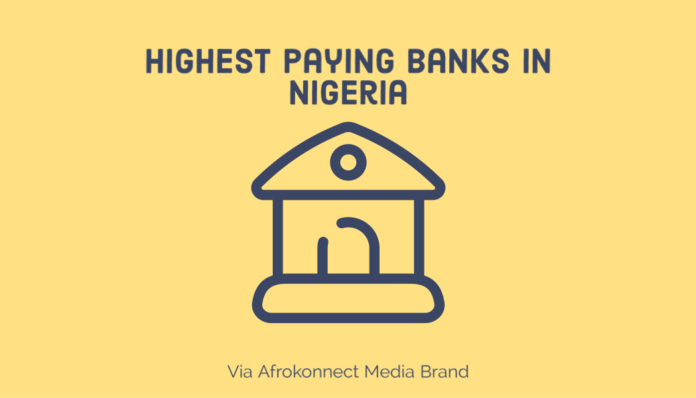 This article is about the top 10 Highest Paying Commercial and Microfinance Banks in Nigeria via Afrokonnect.

Because of the industry’s reputation for offering competitive salaries,

Many recent college graduates have their sights set on a career in the banking sector.

If you studied medicine, for example, and you are ready to undergo training, you can work in a bank.

As a result of the lucrative income and the low threshold for entering the business,

Banking is quickly becoming one of the most popular career choices for recent college graduates.

10 Highest Paying Commercial and Microfinance Banks in Nigeria in 2023

You have arrived to the correct page, as we have produced a list of the highest paying banks in the nation,

So if you are wondering which bank would be ideal for you in terms of salary, this is the page you should be on.

You should be aware, however, that the mentioned values could change somewhat depending on the job that you play in the bank.

Similarly, here is a list of the best banks in Nigeria and the most valuable at the moment.

After its merger with Diamond Bank, Access Bank has become one of the most successful financial institutions in Nigeria.

The bank has over 10,000 employees, and it is said to be one of the banks in the nation that gives its workers the highest salaries.

If you use this bank then here are the latest Access Bank USSD Transfer Codes.

One of the banks in Nigeria that offers the best compensation is First Bank,

It is both a commercial bank and a financial services provider, and its headquarters are located in Lagos.

The bank is of Nigerian origin. It runs a system of nearly 750 retail outlets throughout Africa,

The United Kingdom, USA, Abu Dhabi, Beijing, and Johannesburg, all with the intention of capturing trade-related transactions across these regions.

Retail banking is the bank’s area of expertise, and it has the biggest retail customer base of any bank in Nigeria.

In addition to receiving various perks and allowances,

Individuals at entry-level positions get a monthly salary of around N250,000 from First Bank ($578).

This financial institution has the title of being the most well-known bank in the nation,

Particularly among the younger generations.

It has been reported that the GTB provides its entry-level staff with a monthly salary of around N208,000 ($481),

In addition to various perks and allowances you get while working.

Aside from being one of the most reputable financial institutions in Nigeria,

Zenith Bank Plc also has the distinction of being the fifth highest paid bank in the country.

Jim Ovia established the bank in May of 1990, and it has since expanded to include locations not just in Ghana and Nigeria,

But also in Sierra Leone, South Africa, and the United Kingdom.

The current salary that entry-level employees at Zenith Bank get is considerably above N180,00 ($416) per month.

One of the oldest banks in Nigeria, United Bank for Africa (UBA) was established in 1949,

And now has locations in 20 different nations throughout Africa as well as the three major financial hubs of the world: New York City, London, and Paris.

Incase you are a customer, here is the latest UBA Bank USSD Transfer codes to Buy airtime, Send money and Pay bills.

Ecobank is a prominent independent pan-African bank with its headquarters in Lomé, Togo.

The bank has affiliates across West, Central, and East Africa and Nigeria is one of its member countries.

In 32 countries, including Benin, Burkina Faso, Burundi, Cameroon, Cape Verde, the Central African Republic, Chad, the Republic of the Congo,

One of the most important and successful commercial banks in Nigeria is called Sterling Bank.

Even though some of the bank’s staff members are independent contractors,

The institution has more than 2000 employees. In addition to being one of the top paying banks in the nation,

Sterling is a national commercial bank that is fully regulated by the Central Bank of Nigeria.

A starting salary of N145,000 ($335) per month is offered by Sterling Bank to its entry-level employees.

When comparing compensation structures across all of Nigeria’s top employers, Fidelity Bank ranks in top 10.

Since its inception in 1988, the bank’s assets have grown to more than US$6 billion.

In addition to this, according to the findings of the 2017 KPMG Banking Industry Customer Satisfaction Survey (BICSS),

The bank was recognized as the fourth best bank in Nigeria in the retail market category.

Because it was established in 1917, the Union Bank of Nigeria is considered to be one of the oldest banks in the nation.

Prior to that, it had been known as Colonial Bank.

As a result of the sale of Barclay Bank’s shares in the firm in 1979,

The name of the bank was changed to Union Bank of Nigeria Plc in order to more accurately represent the company’s new ownership structure.

The bank also has a number of other subsidiaries.

The minimum monthly salary for entry-level employees at Union Bank in Nigeria is N180,000 ($416),

Making it one of the highest paid banks in Nigeria overall.

Highest Paying Commercial and Microfinance Banks in Nigeria in 2023

The AB Microfinance bank is recognized as being among the highest-paying of all the nation’s Microfinance Banks.

The Microfinance Bank of LAPO

Another one of the nation’s micro-finance banks that offers competitive remuneration is called LAPO Microfinance Bank.

In reaction to the impacts of the adoption of the Structural Adjustment Programme (SAP) in 1986,

LAPO MfB was created as a response to the repercussions of the SAP.

At the moment, the financial institution serves more than one million clients,

It has been granted permission to function as a National Microfinance Bank by the Central Bank of Nigeria (CBN).

What bank pays the highest salary in Nigeria in 2023? 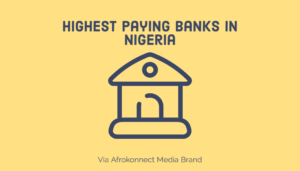 Access bank is currently the bank in Nigeria that pays its employees the most,

It also ranks highly among the best places to work in the banking industry in Nigeria in terms of its total assets.

The financial institution ensures that every worker is paid an appropriate amount for their position.

Highest Paying Commercial and Microfinance Banks in Nigeria in 2023

Congratulations, you’ve made it to the end of this publication,

We hope this article has provided you with the information you needed on your research.

Let us know what you think via the comments section below. Good luck

Best Companies in Ghana: Top 8 Most Valuable in 2023