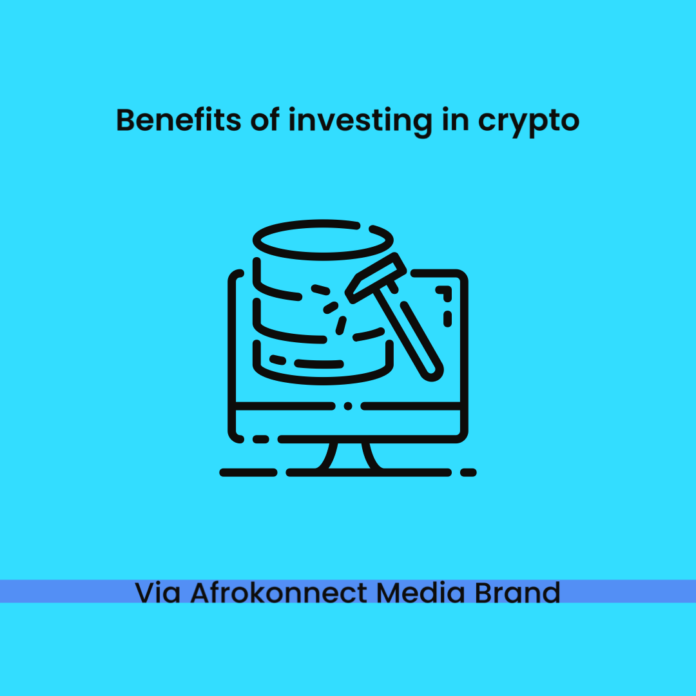 In this article we will discuss the benefits of investing in crypto via Afrokonnect.

There are various benefits that come with investing in anything, including when trying to invest in online casino games.

Still, it seems as though cryptocurrency is always coming out regarding investments.

Come with us as we explore cryptocurrency and some of its benefits.

Before making any investments, you’ll always want to understand the concept of what you have opted to invest in.

Digital currency was called eCash and laid the foundation of cryptocurrency as we know it.

The idea behind eCash was to have a currency that offered users anonymity which made transactions far safer.

The concept was later used in a US Bank in the late 1990s.

In 2008, the idea of eCash was revisited with the invention of Bitcoin.

In 2009, the world saw the birth of what we know as the first cryptocurrency to be released and used.

Cryptocurrency is a digital currency that can be used in the very same manner as a fiat currency.

The only significant difference between the two is that cryptocurrency is digital, while fiat currencies have a physical note that can be exchanged at the point of purchase.

Cryptocurrency is made safe through cryptography which is the study of specific techniques that are used in the midst of a security threat.

Cryptography ensures the network is secure from third parties who plan or want to steal information from the crypto network.

Blockchain operates as a type of ledger, preserving a record of all transactions happening within the network.

When a transaction is made and is successfully processed and approved, the trade turns into a block and is added to a chain.

The chain is created as more and more blocks get added to the chain.

The benefits of using crypto

When trying to invest in crypto, the first thing you’ll be thinking of are the benefits that come with using it.

Below we explore the different benefits that come with using cryptocurrency.

Cryptocurrency is a decentralized currency meaning that the power within the network does not solely belong to one set person or organization.

This means that the banks and the government have little to no control over what happens in cryptocurrency.

The most that the government can do to cryptocurrency to have influence is to either ban or restrict its use.

Some countries have taken to seeing cryptocurrency as an asset as it grows in value.

This means that they are able to tax it as a growing asset.

We’ve all been charged large sums of money by our banks for keeping and making transactions using their resources.

The same can be said for cryptocurrencies; however, their transactions cost is lower than your traditional bank.

It’s important to remember that transactional expenses will differ from platform to platform; however, they are mostly lower than that of banks.

Benefits of investing in crypto 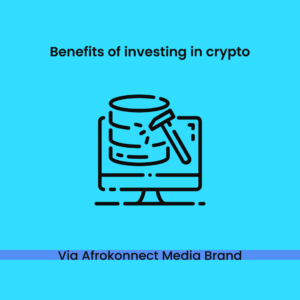 Many banks take a few days to have funds reflected from one bank to another.

People can wait as long as seven business days to have their money, and if there’s a problem, even longer.

Thankfully, cryptocurrency offers a solution. When a transaction is approved within a network, the money reflects as soon as possible, meaning that people no longer have to wait for days to get their money.

How to make passive income online while Traveling

Asake Biography, Career, Songs, and Net Worth in 2022