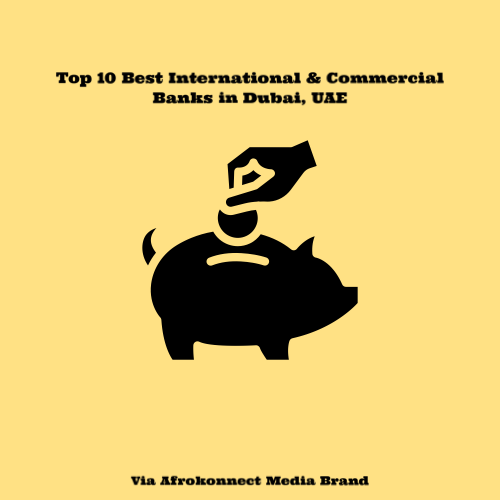 Welcome to this article about banks in UAE, the top international and commercial banks in Dubai and the whole of United Arab Emirates, via Afrokonnect.

The Central Bank of the United Arab Emirates (UAE) is the primary regulator of the banking sector in the UAE.

It is also responsible for creating and putting into practice the banking, credit, and monetary policies that are in place throughout the UAE.

As well as acting as the UAE’s central bank, it is responsible for the upkeep of the country’s gold and foreign currency reserves.

Basically, the role of the state’s financial agent is played by the Central Bank.

The United Arab Emirates has two primary types of commercial banks, which are as follows:

These financial institutions are public shareholding organisations that have been granted a license in accordance with the provisions of Union Law (10) of 1980.

In accordance with the regulations of the legislation,

These financial institutions have been granted permission to conduct business in the area by the Central Bank.

In the United Arab Emirates (UAE), there are 46 commercial banks that are locally incorporated.

The local banks that are controlled by the governments of the several Emirates have a strong presence in the financial sector of the UAE.

Customers can obtain a wide range of banking and financial products and services from the leading banks in the UAE,

In that part of the world, Islamic banking has experienced significant growth, with the establishment of seven specialised banks that offer Shariah-compliant Islamic banking products.

The following is a list of the top 10 banks in the United Arab Emirates:

Which is now the largest bank in the whole of United Arab Emirates.

Emirates NBD is the result of a merger that took place in October 2007 between Emirates Bank International (EBI) and the National Bank of Dubai (NBD),

It is now one of the largest groups in the United Arab Emirates,

Dubai serves as the location of the bank’s main office.

The banks offer their customers a wide variety of services and conduct their operations through a variety of business units.

Banking services such as wholesale banking, Islamic banking, investment banking, mortgages, and credit cards are included in this category.

The headquarters of Abu Dhabi Commercial Bank can be found in Abu Dhabi.

The government of Abu Dhabi owns a 65% stake in the bank that was established in 1985 through the merger of three other financial institutions.

In addition, the bank has total assets that amount to over $70.32 billion,

It offers retail banking, commercial banking, Islamic banking, and other financial services through its many different business segments.

They provide banking and financial services based on Islamic principles, provided through Islamic banking’s myriad of business branches.

In 1975, Dubai Islamic Bank opened its doors for the first time.

It was the first bank of its kind to incorporate Islamic teachings and values into its day-to-day operations.

Additionally, the most prominent Islamic financial institution in the UAE. City of Dubai is home to the bank’s main office.

The first Islamic bank serves as a model for Shariah-compliant banking services offered by other financial institutions around the world.

In accordance with Shariah law, it promotes a diverse range of novel products.

The financial institution engages in a diverse range of commercial activities,

Including consumer banking, corporate banking, real estate development, treasury, and many others

Union National Bank is a major domestic financial institution that was established in 1982 and has its main office in Abu Dhabi.

The governments of Abu Dhabi and Dubai are both shareholders in the financial institution.

The bank is organised into several divisions, including Treasury, Investment, and the International and Financial Institutions Division.

And, business entities all receive a variety of financial products and services from the bank.

The bank maintains overseas branches in Egypt, Qatar, and Kuwait,

In addition to a representative office in the People’s Republic of China.

Commercial and International Banks in Dubai

Abu Dhabi Islamic Bank comes in at number six and is a public joint stock company with its headquarters in Abu Dhabi.

Having been founded on May 20th, 1997, this financial institution is a Shariah-compliant lender that also offers personal, business, private, and corporate banking services.

It conducts its daily operations through its various business divisions, which include global retail banking, global wholesale banking, private banking, treasury, and real estate, among others.

The bank maintains offices in international locations including Egypt, Iraq, Saudi Arabia, and the United Kingdom.

The bank was established in 1976, and the Ras Al-Khaimah Emirate serves as the location of it’s main office.

The ownership of 52.8% of the bank is held by the Ras Al-Khaimah government.

Individuals and companies in the UAE can take advantage of the bank’s retail and commercial services, respectively.

The bank was given the award for “Small and Medium-Sized Enterprise Bank of the Year” by the Arabian Business StartUp Awards,

As well as the award for “Middle East’s Best Internet Banking Product of the Year” by The Asian Banker.

Eighth on the list is the National Bank of Fujairah,

Which is a commercial bank that was established in 1982 and has it’s main office in Fujairah, United Arab Emirates.

At the 2017 Banker Middle East UAE Product Award, the Bank and its subsidiary were honored in the following categories:

9th on the list is the Mashreq Bank, which has been around since 1967 and has its headquarters in Dubai.

It is the leading bank in the UAE that is privately owned, as well as the oldest of its kind.

HSBC Bank is affiliated with this financial institution as an associate company.

In addition, the bank was the first in the UAE to introduce consumer loans, install ATM dispensers, and issue debit cards.

Qatar, Kuwait, Egypt, and Bahrain are just some of the countries in which Mashreq Bank operates branches.

Banks in UAE – Best Commercial and International Banks in Dubai 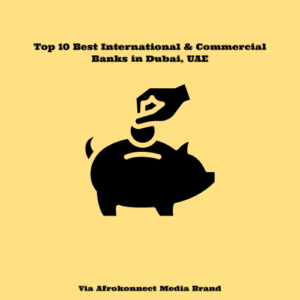 The Commercial Bank of Dubai was established in 1969 and has its main office in the district of Deira in Dubai.

We sincerely hope that you found this overview of the Top 10 Banks in UAE to be helpful and interesting.

We discuss the financial status of the banks in the UAE in addition to two major categories of topics and list of top commercial and international banks in the United Arab Emirates.

Top 10 Cheapest Hotels In Lagos With Their Prices 2023

7 Best Crypto-Friendly Banks to Use for any Transaction

The Burna Boy Story – 4 Things He did before Succeeding