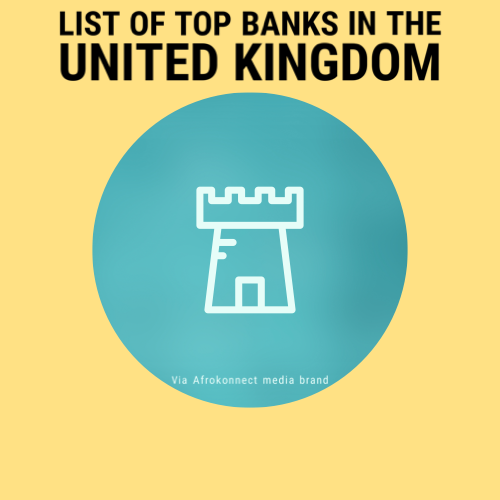 Welcome to this publication about the List of 10 Top Banks in the United Kingdom (UK), via Afrokonnect.

It is generally agreed that the banking industry in the United Kingdom is the most extensive and developed in all of Europe.

It has been ranked as the fourth largest in the whole wide world.

The financial sector in the United Kingdom is extremely advanced, with new sectors being driven by cutting-edge technology and innovative practices.

In addition to this, it is widely regarded as the world’s most important financial center for international lending.

The banking industry in the UK has a significant presence in every region of the country due to the staggering number of 40 billion payments that were processed.

Banks in the United Kingdom can be demonstrated by the fact that approximately two-thirds of the population is said to have credit cards,

In addition to the fact that nearly the entire population of the United Kingdom possesses a debit card.

Organizational Hierarchy of the Financial Institutions Found in the UK

The term “bank” can refer to a number of different types in the UK.

Different varieties of banking services meet a wide range of customer requirements, from individual to commercial.

4 Types of Banks that can be found in the UK

The following is a rundown of the four primary types of banks that can be found in the UK:

Also known simply as the BoE, is the Central Bank of the United Kingdom.

The Bank of England is not only the central bank of the United Kingdom but also the eighth oldest bank in the entire world.

These banks offer retail services, and the majority of their customers are members of the general public.

They provide service to a diverse group of customers rather than concentrating on serving a particular market or category of clients.

High street banks are distinguished by the fact that they are ubiquitous and can be found in any commercial district of towns and cities.

That is notably one of their defining characteristics.

High Street Banks offer the services that fall under the category of “business banking.”

These services are provided on top of what a standard account is able to provide for its customers.

As a result, they offer these in addition to their regular services for a predetermined cost.

Customers, which can range from individual corporations to governments, can take advantage of the investment banking services provided by financial institutions.

In addition, these institutes offer investment banking services, through which clients can invest in the bond stocks and equity of other companies.

The services of banks in the United Kingdom are provided for the benefit of high street banks, investment trusts, and pension funds.

List of 10 Top Banks in the United Kingdom (UK)

Over the course of the last decade, the banking industry in the UK has undergone significant change.

A small number of extremely large banks currently control a significant portion of the banking industry.

This selected group of financial institutions holds a monopoly on providing services to companies.

Let us now take a look at some of the history of the top banks in the UK as well as their current standing.

Although it was established in Hong Kong in March 1865, its current headquarters are located in London, the financial capital of the United Kingdom.

It is also the largest bank in the United Kingdom. However, Hong Kong remains the location of its founding.

It offers a wide variety of services including retail banking, wealth management, as well as commercial banking, global banking, and global private banking.

The Hong Kong and Shanghai Banking Corporation was the name of the institution when it was established in Hong Kong,

Which is where the bank got its current popular name, HSBC bank.

The second largest financial organization in the United Kingdom is the Lloyds Banking Group.

The Lloyds Banking Group is recognized as a leading financial organization in the United Kingdom.

It was established in 2009 through the acquisition of HBOS, and it was formed through the merger of HBOS and Lloyds TSB.

Lloyds Bank, Halifax, Bank of Scotland, and HBOS are the four financial institutions that are part of the Lloyds Banking Group.

It holds the position of being the second largest bank in the United Kingdom and has its headquarters in the city of London.

The Royal Bank of Scotland, also known as RBS Group, is a financial institution that offers a variety of services to its customers.

It is headquartered in Edinburgh, which is located in Scotland, and it also has offices in various other countries.

Barclays, the fourth company on our list, is a multinational investment bank and financial services company with its headquarters in London.

The Barclays Bank is active in approximately fifty countries around the world.

Barclays is a full-service financial institution that provides a variety of investment banking products and services,

Such as corporate banking, personal banking, insurance, and wealth management.

Standard Chartered is a global leader in banking and financial services and is a member of the Fortune 500.

It is a financial services company with headquarters in London,

But it does not operate any retail banking branches anywhere within the United Kingdom.

Despite its location in the United Kingdom, it does not provide retail banking services.

Africa, Asia, and the Middle East contribute the vast majority of the company’s profits.

Sixth on the list is Santander UK, a financial services provider that operates in the United Kingdom and provides commercial, retail, and global corporate banking services.

It does this through a variety of distribution methods, including automated teller machines (ATMs), the internet, digital media, mobile phones, and landlines.

The Nation Building Society is akin to an institution that manages mutual funds and is regarded as the largest building society in the world.

It has 15 million members. Current accounts, mortgages, savings accounts, and other personal finance-related services are offered to the organization’s members.

Schroders is a company that manages assets and has its headquarters in London.

It provides a variety of services including retail banking, wealth management, and commercial banking,

As well as global banking through its operations in Europe, the Americas, Asia, Africa, and the Middle East.

This bank is classified as a business bank. Close Brothers Group plc is ranked ninth on the list of top banks in United Kingdom (Uk).

It is a merchant banking group that offers a variety of financial services,

They offer deposits to businesses and individuals in the UK, in addition to providing loans to individuals and smaller businesses. 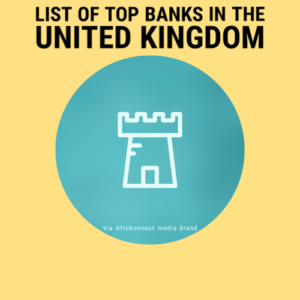 Building society that operates out of Coventry, England, and is the second largest bank in the United Kingdom is known as the Coventry Building Society.

There are three companies that fall under this category: Godiva Mortgages Limited, Coventry Building Society, and Covered Bonds.

It is able to provide its members with a variety of products and services,

Such as financial planning, mortgages, investment services, savings products, and travel insurance, among other things.

We sincerely hope that you found this overview of the Top 10 Banks in the United Kingdom to be both informative and enjoyable (UK), via Afrokonnect.

The organization and health of the UK’s financial institutions are both topics of conversation here.

Let us know what you think via the comments below, thank you for visiting.

Top 4 Metaverse coins that can skyrocket in 2023

Things Musicians Should Be Investing Money In