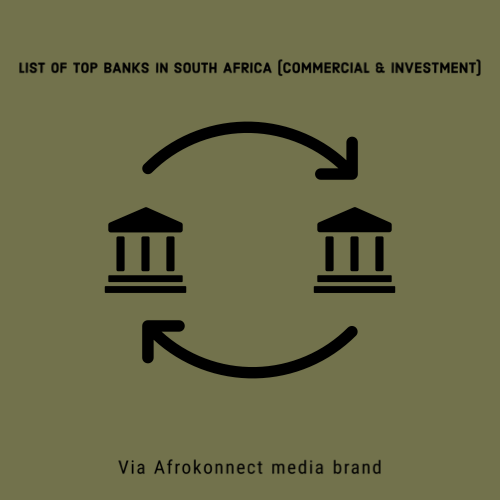 Welcome to this publication about the List of Top Commercial and best Investment Banks in South Africa via Afrokonnect.

Similar to the United States, South Africa has had consistent economic development because to the country’s well-developed banking industry.

More than R5 trillion is held in its numerous banks, which include Mutual Banks, Co-operative Banks, Foreign Banks, Private Banks, including Commercial Banks, Merchant Banks, and Other Banks.

These South African financial institutions serve clients all over the world by providing a full range of banking services,

From personal and business banking to merchant banking, investment banking, and wealth management.

Despite being a developing nation, South Africa boasts a highly developed and sophisticated financial system that greatly facilitates commerce.

As an added bonus, this country is well-positioned to provide global financial services on a worldwide scale,

Because of it’s well-developed banking infrastructure and extensive banking networks.

Many well-known banks, both domestic and foreign, are actively serving customers in South Africa.

The “R” represents the South African currency, the Rand.

The South African Reserve Bank was founded in 1921 as the country’s central bank.

Pretoria, South Africa is home to its headquarters.

To promote equitable and long-term expansion of the South African economy, the bank’s principal mission is to secure and preserve price stability.

It is crucial to the country’s economic stability, along with other institutions.

List of Top Commercial and Investment Banks in South Africa

We explore the particulars of this bank based on the amount of their assets;

With total assets of over R2 trillion (USD 153 billion) and a market valuation of about R310 billion (USD 23 billion),

The Standard Bank Firm is the largest African banking group, providing a wide variety of banking and associated financial services in sub-Saharan Africa.

More than 54,000 people are employed by the Group, which has been doing business in South Africa for over 155 years,

Standard bank has it’s headquarters in Johannesburg, and was founded there.

The Group was able to achieve very successful financial results at the conclusion of the most recent fiscal year,

The group conducts its operations on a global scale and offers two primary types of banking services:

a) Personal and business banking: which includes providing banking and other financial services to individual customers and small and medium-sized enterprises (SMEs) in Africa;

b) Corporate and investment banking services in, for, and across Africa.

c) Wealth Management Services, which are geared toward the management, expansion, and protection of their clients’ wealth; and

The Anglo American Corporation of South Africa Limited and RMB Holdings merged in 1998 to become the present iteration of FirstRand,

Which existed at the time in its current form (RMB).

More than 44,000 people were employed by the company, which has its headquarters in Johannesburg, South Africa.

It holds around R1.2 Trillion in assets, making it the second-largest bank in South Africa (USD 92 Billion).

FNB, RMB, Aldermore, and Ashburton Investments are the companies that make up the integrated financial services industries portfolio owned by FirstRand.

The group provides a comprehensive range of transactional, lending, investment, and insurance products and services.

Its operations are concentrated on South Africa as well as specific countries in sub-Saharan Africa and the United Kingdom.

The Group was successful in generating a total comprehensive income of R28.79 billion for the fiscal year,

Representing an increase of 19% from the previous year and a Return on Equity of 23%.

The previous name for this company was ABSA Group Limited.

Barclays Africa Group Limited is the supplier of financial services in Africa.

More than 39,000 people are employed by this wholly-owned subsidiary of Barclays,

Which has its headquarters in the city of Johannesburg in the country of South Africa.

It has total assets of around R1.1 Trillion (approximately USD 85 Billion), making it the third-largest bank in South Africa.

Nedbank has a market capitalization of R128 billion, making it one of the most important financial institutions in South Africa.

More than 31,000 people are employed by the company, which operates in over 39 countries throughout the world and has more than 2000 branches.

They provide a wide variety of wholesale and retail banking services,

Sandton is the location of the company’s headquarters. It had a total asset value of around R892 billion, which is equivalent to approximately USD 69 billion.

Investec is a company that specializes in banking and asset management on a worldwide scale.

It offers a wide variety of financial goods and services to its customer base in Europe, Africa, and Asia-Pacific.

The corporation has its headquarters in Johannesburg, which is located in South Africa, and it currently has 8,200 employees around the globe.

Capitec is a retail bank in South Africa. Its headquarters are in the Western Cape, and it has 800 retail locations around the country.

The Capitec has 9.9 Million customers that are actively using their services while the bank has a total workforce of around 11,400 people.

According to these accounts, the company’s headline earnings increased by 18% to R4.46 Billion, and the Return on Equity was 27%.

African Bank Limited is a private sector financial service provider retail bank that offers a broad variety of products and services to the customers that reside in South Africa.

These products and services include banking options for loans, investments, debit cards, and credit cards.

It is a subsidiary of African Bank Holdings Limited, which is the parent firm.

The company’s headquarters may be found in Johannesburg, which is located in South Africa.

African Bank Limited had a total asset value of around R32 billion (USD 2.5 billion), and it had a gross earning value of R5.7 billion.

It is a privately owned and operated commercial bank in South Africa that holds a license from the Reserve Bank of South Africa to operate as a “Locally Controlled Financial Institution.”

Grindrod began operations in 1994 and at that time had offices in Johannesburg, Durban, Cape Town, and Pretoria in the country of South Africa.

Grindrod Bank’s primary focus is on serving the financial needs of private, corporate, and institutional customers by offering products and services, 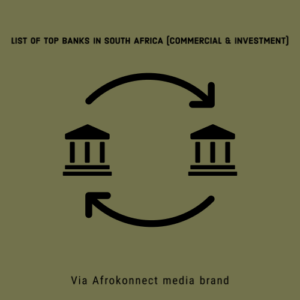 Mercantile Bank is a commercial financial institution that was established in 1965 and has its main office located in Sandown.

It is a wholly owned subsidiary of Mercantile Bank Holdings Limited, which is the parent firm.

Mercantile Bank Holdings Limited is a bank that controls an investment holding company.

Both internationally and locally, with a particular emphasis on the Portuguese market.

On the other hand, business banking, commercial banking, and alliance banking make up the bulk of the bank’s operations.

Bidvest Bank is a commercial bank that operates in the private sector.

It was established in 1998, and its headquarters were located in Johannesburg, in the country of South Africa.

Which is a multinational commercial conglomerate with its headquarters in South Africa.

The primary focus of the bank is on the distribution of a range of retail banking products all throughout South Africa.

The entire asset position of the bank had expanded by 13%, reaching R7.8 Billion (about 600 Million USD).

We really hope that you found our information about the best banks in South Africa to be helpful.

Let us know what you think about this publication via Afrokonnect.

Is SLP a Good Investment in 2023? – Smooth Love Potion