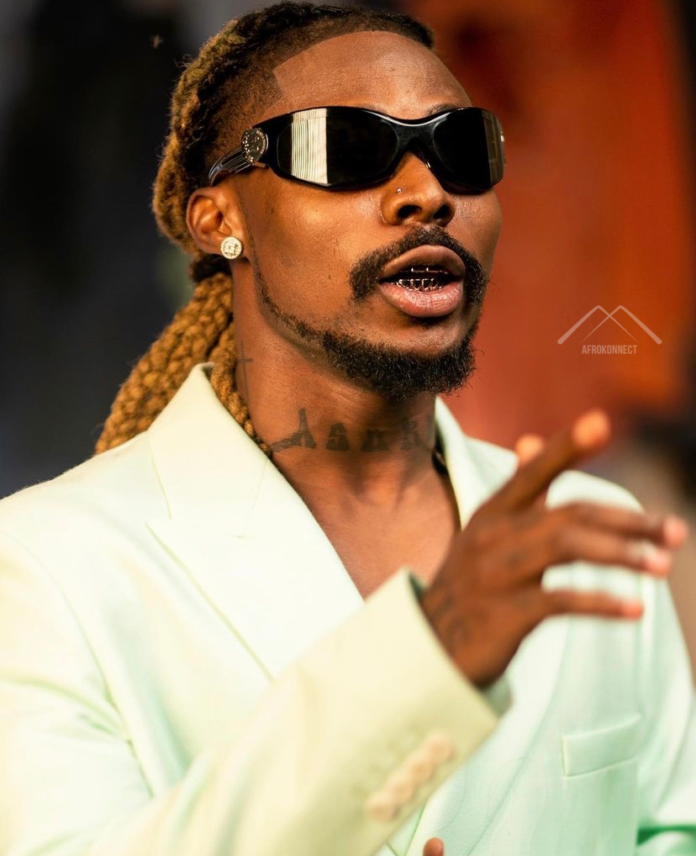 Welcome to this article about Asake Biography, Career, Songs and Net Worth in 2023 via Afrokonnect.

Asake is the stage name given to Ahmed Ololade Asake, who is a well-known name in the Nigerian music industry today.

He is also a composer, originally from the western part of Nigeria,

Asake was born on the January 13th in 1995 into the family of Mr and Mrs Ololade,

For his education he attended Obafemi Awolowo University in Ile-Ife,

Which is located in the state of Osun, he majored in Theatre and Performing Arts.

Asake Biography, Music Career, Songs, and Net Worth in 2023

Asake began his career in music at a very early age and quickly began displaying his ability on social media via the upload of a number of freestyle videos.

Only a small number of people were aware that he was also a singer at the time,

But he rose to prominence when he began appearing with Broda Shaggi in a series of comedy videos produced by Broda Shaggi.

Asake started his Entertainment lifestyle as a dancer, in fact the nickname Asake was even gotten from his dancing days,

He grew up in Lagos State, where he had most of his childhood experience.

In December of 2019, Broda Shaggi included him in the recording of his song named “Star,” which helped to launch his career as a musician.

In January of 2020, Asake released the song “Lady,” making the most of the opportunity presented to him at the time.

The song quickly gained popularity over the internet, attracting the attention of a wide variety of listeners, including well-known celebrities.

Asake had yet another popular song released under his name in the same year, and it was named “Mr. Money.”

Since then, people have referred to him by that moniker.

Asake Biography, Career, Songs and Net Worth in 2023

Olamide, the head of YBNL Nation and the owner of YBNL Nation’s record label, formally welcomed Asake to the label on February 8th, 2022.

In 2022, he dropped another single “Omo Ope”, a record he featured the music guru and superstar, Olamide.

Asake released his debut EP, Ololade Asake and ever since, he’s been making waves in the industry.

He had a remix of his hit single “Sungba” with the Grammy award winner Burna Boy,

A single off his debut EP and also had a successful feature from popular disk jokey, Dj Spinall on a track titled Palazzo.

In one of recent interviews with Beat FM, Asake stated that Baddo changed his life for good, watch below;

Most of his success came after he was able to link up with The YBNL’s boss Olamide,

Where he was offered a contract to be part of the music label that was already affiliated with internationally recognized label, Empire,

Of course, he took the offer and he’s now signed to Olamide’s YBNL Nation record label.

Asake has a very unique style of Afrobeats, he makes good Amapiano records and one can tell that the Sungba crooner would deliver more hits and inspirational contents in the years to come.

We await more projects and more collaborations too from the one and only Mr money.

Asake Biography, Career, Songs and Net Worth in 2023

Asake Net Worth in 2023 according to Forbes

Went from hustling for free bedspace to investing in real estate 🏡 pic.twitter.com/8bThB7fnVw

The year 2022 is a good year for the Nigerian superstar Asake,

It was his breakthrough year and he has been on the road for show in Nigeria, Ghana and all over the continent,

His performance fee almost tripled after he got signed into YBNL and his songs were topping charts back to back,

In one of his tweet, Asake stated “Went from hustling for free bedspace to investing in real estate” after he bought a mansion in Lagos,

All of these contributed to his current worth and value in the game,

Now that we’ve seen enough about Asake biography and Net worth, is time to stay connected on social media as he’s an active user of the platforms;

This brings us to the end of this publication about Asake Biography, Career, Songs and Net Worth in 2023 via Afrokonnect.

Father DMW shares his story: Net worth in 2023 and Biography