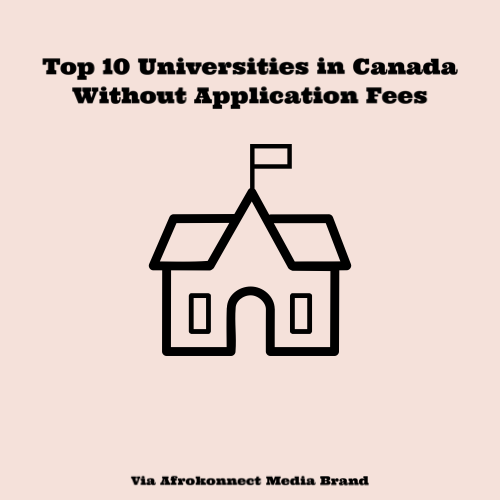 Welcome to this article about the top 10 Universities in Canada Without Application Fees for International Students in 2023, via Afrokonnect.

One of the most difficult obstacles that some international students face when trying to study in Canada is the fact that they cannot afford the application fees required by the institution of their choice.

But it’s not because these fees are too expensive,

Usually because the money could be used to pay other bills.

Some people also worry that they might lose their money if they don’t get in, since the fees are always non-refundable.

To top it all off, paying these fees doesn’t mean you’ll be accepted or even considered.

Majority of these educational institutions assert that the money is used for logistical purposes.

Therefore, in this article, we have painstakingly listed 10 Universities in Canada that do not charge application fees for foreign students in the year 2023.

While we walk you through this process, why don’t you grab a cup of popcorn and some fries?

Royal Roads University is a public institution of higher education that can be found in the city of Colwood in the province of British Columbia, Canada.

In June of 1995, Royal Roads University opened its doors to the general public and began conferring degrees.

The university welcomes students from all over the world to pursue degrees at the Bachelor’s, Master’s, and Doctoral levels in a variety of academic fields.

It is estimated that there are approximately 25,657 students enrolled at the university.

One of the universities in Canada that allows students to apply to study there without having to pay an application fee is Royal Roads University.

You are able to submit your application to the university electronically,

You will not be required to pay an application fee, and your admissions application will always be thoroughly reviewed,

To determine whether or not you are qualified to attend the university.

Quest University does not make a profit. The first students enrolled at the university in September 2007, when it had just opened its doors.

If an international student applies to Quest University before the application deadline, they won’t be required to pay an application fee.

This makes Quest University one of the best universities in Canada for international students.

However, there is a fee associated with accepting applications that are submitted to Quest University after the application deadline has passed.

Therefore, if you are interested in applying, you should always submit your materials before the deadline.

Universities with no application fee for International students in Canada 2023

The city of Hamilton, Ontario, Canada is home to Redeemer University,

A Christian-affiliated private university that focuses on liberal arts and sciences.

When it first opened its doors in 1982 as “Redeemer College,”

This means that if you want to apply to Redeemer University without having to pay an application fee,

You need to submit your application before the deadline that has been set.

Colleges in Canada without application fee

Catherine Booth Bible College was the forerunner to what is now known as Booth University College and was founded in 1982.

Downtown Winnipeg, in the province of Manitoba, Canada, is the location of Booth University College, a Christian-affiliated, private liberal arts university college.

It has some sort of connection with the Salvation Army.

Booth University is one of the universities in Canada that does not require prospective students to pay an application fee in order to be considered for enrollment.

However, Booth University requires that all of its applicants who successfully passed the screening exercise and are now being considered for admission pay an acceptance fee of five hundred Canadian dollars (500 CAD).

In addition, this five hundred Canadian dollars is intended for the admitted students,

So that they can claim their various admission slots.

Universities in Canada with no application fee in 2023

University of Victoria comes in at number five,

The University of Victoria, which can be found in the province of British Columbia in Canada, is a public research university.

Victoria College, which would later become the University of Victoria, was founded in 1903 and was initially an affiliated college of McGill University.

On July 1, 1963, the university was granted full autonomy by means of a charter.

One of the few universities in Canada that does not require prospective students to pay an application fee is the University of Victoria.

The 9 different faculties at the university are home to a combined total of approximately 23,454 students.

Victoria university can take pride in its size.

University of New Brunswick comes in at number six.

The University of New Brunswick is one of the universities in Canada that offers the best value for money to international students.

The university was founded in 1785, making it the oldest English taught university in Canada.

It has multiple campuses located throughout the province of New Brunswick,

And it provides more than 75 programs across its 14 faculties.

There are approximately 10,500 students enrolled at the university, and they come from over 120 different countries.

In addition, both domestic and international students can choose from a wide variety of fields of study at the undergraduate and graduate levels.

The fields of mass communication, engineering, business administration, mental health, and many others are included in this category.

The city of Toronto, Ontario, Canada is home to Tyndale University, which is a private, interdenominational, and evangelical Christian institution of higher learning.

At the time, the school was known as Tyndale University.

The university provides undergraduate and graduate degree programs in a wide variety of academic fields,

Including English, pedagogy, history, religious studies, and philosophy, amongst others.

You won’t be charged an application fee; however, there is a fee for other international students to apply,

And, the amount of that fee is contingent on the applicant’s preferred course of study.

Colleges in Canada without application fee

The Centennial College of Applied Arts and Technology comes in at number 8.

Centennial College of Applied Arts and Technology is a post-secondary institution in the city of Toronto, Ontario, Canada.

It is authorized to confer both certificates and degrees.

Since it was established in 1966, the Centennial College of Applied Arts and Technology holds the title of being Ontario’s oldest college that is publicly funded.

These academic programs are available in a wide variety of subject areas,

Student population at Centennial College of Applied Arts and Technology is estimated to be around 45,645 at the moment;

This number accounts for both full-time and part-time students.

Centennial College of Applied Arts and Technology does not require its applicants to pay any application fees in order to be considered.

Universities in Canada Without Application Fees For International Students in 2023

The University of Saskatchewan comes in at number nine.

University of Saskatchewan is a public research university in Canada.

Its campus can be found on the east bank of the South Saskatchewan River in Saskatoon,

Which is located in the province of Saskatchewan in Canada.

Which is considered to be the year that marked the beginning of the University of Saskatchewan as we know it today.

The University Act is the name of this piece of provincial legislation.

It allowed for the establishment of a publicly funded but otherwise autonomous institution for the benefit of all of the residents of the province.

University of Saskatchewan has an estimated total student population of 25,545,

It is one of the educational institutions that does not charge application fees to prospective international students.

Universities in Canada Without Application Fees For international students

The University of Alberta comes in at number 10.

Edmonton, in the province of Alberta, Canada, is home to the University of Alberta,

Which is a public university that focuses on research.

Alexander Cameron Rutherford, who was the first premier of Alberta, and Henry Marshall Tory,

Who was the first president of the university, were the ones who established it in 1908.

It is estimated that there are 39,756 students attending the university,

And, interestingly they come from more than 150 different countries.

There are approximately 400 different degree programs available across the university’s 18 different faculties.

Additionally, there are a variety of undergraduate and postgraduate fields open to students from both domestic and international backgrounds.

A wide variety of fascinating fields of study including engineering, business management, mental health, and mass communication, to name just a few.

Conclusion on Universities in Canada Without Application Fees For international students 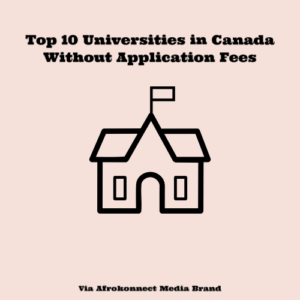 Above are the top 10 Canadian universities in 2023 that will not charge overseas students an application fee.

Is your question (s) addressed in this article?

If so, please use the sectiom below to tell us how we did (or if you have any questions) and we will get back to you as soon as we can.

Here are visa free countries for Nigerians just incase you might be traveling from Nigeria.