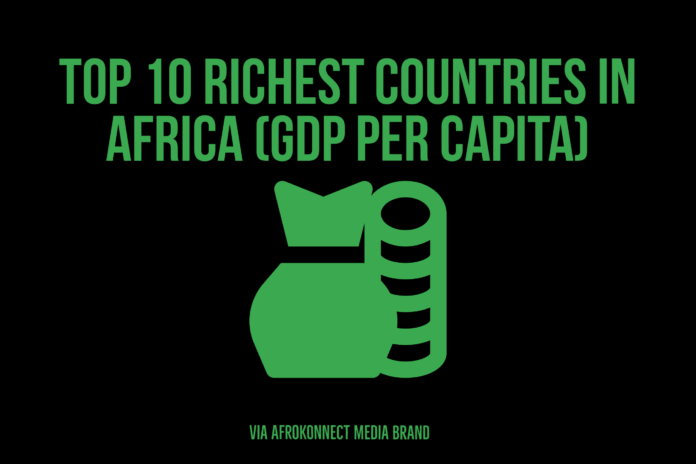 Welcome to this article about The 10 Richest Countries In Africa based on GDP Per Capita in 2023, via Afrokonnect.

The continent of Africa is enormous, and it is home to more than 50 independent nations.

Many societal issues, stemming from its history of colonialization and its relatively recent independence, persist today.

Even the wealthiest nations in Africa are still struggling with a variety of issues.

According to the gross domestic product per capita, which is sometimes referred to as income per person,

Since income disparity is not taken into consideration by this statistic,

Even the wealthiest countries in Africa have huge portions of their populations living below the poverty line.

This is due to the fact that the wealth generated is concentrated in the hands of only a small number of people.

We are aware that this problem is not unique to the African continent!

Africa is not a poor continent; it is rich in mineral and natural resources.

However, the continent’s poor infrastructure, high levels of corruption, ongoing political unrest, and centuries of exploitation have led to dire economic conditions.

Top 10 Richest and Wealthiest Countries in Africa in 2023

Rich people and celebrities from all over the world travel to the Seychelles islands in the Indian Ocean,

Just to relax on some of the continent’s most beautiful beaches.

The revenue that is generated through tourism is what allows Seychelles to boast the greatest per capita income in all of Africa.

Because of its outstanding natural beauty, Mauritius has become a popular tourist destination in recent years.

The nation’s financial sector is still robust, which encourages investment from outside the country.

Richest and Wealthiest Countries in Africa in 2023

Because of its significant oil production and relatively low population,

Equatorial Guinea enjoys a high income when measured on a per capita basis.

On the other hand, a significant portion of the population leads a perilous existence as a direct result of the government’s many shortcomings.

Aside from Nigeria, Gabon is another big oil producer with severe economic disparity.

In spite of the fact that it has been producing oil for the past four decades,

The nation has not been successful in diversifying its economy,

Which is a common challenge for significant oil producers.

Richest and Wealthiest Countries in Africa 2023

Before we continue, you might want to check out the top 25 poorest countries in the world.

Oil wealth and a relatively low population density contribute to Libya’s status as one of the continent’s wealthiest nations.

Nevertheless, the political instability in the region has a significant impact on both the lives of the inhabitants and the growth of the country.

Since it gained its independence in the 1960s,

Botswana has been steadily developing into a prosperous nation.

The primary drivers of Botswana’s economy are its tourism and service sectors.

The high prevalence of AIDS and HIV among the country’s population is the primary challenge the nation faces.

South Africa is widely regarded as both one of the most beautiful and well-known countries on the African continent.

In spite of the fact that it is a country with an upper-middle income,

The problem of inequality, which is caused by the exclusion of a significant portion of the population (the black population), is a significant challenge for the country.

Richest and Wealthiest Countries in Africa in 2023

When it comes to resources, particularly diamonds,

Namibia is one of the wealthiest countries on the African continent.

However, the public does not receive its fair share of this wealth,

And as a result, they struggle mightily to meet their most fundamental needs.

First of all, you need to check out these Top 10 Most interesting fun facts about Algeria,

Algeria is the second-largest oil producer on the African continent and also produces a wide variety of minerals.

The nation has been recovering after suffering through a terrible war of independence,

But it is extremely reliant on oil for economic growth. 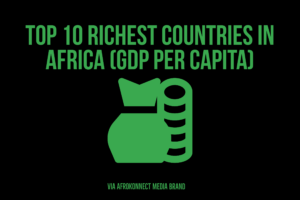 Political climate in Tunisia is unstable, which has resulted in a decrease in the number of tourists visiting the country.

Because mining and tourism are the country’s primary sources of revenue, this has a significant impact on the nation.

Nevertheless, Tunisia is still among the top 10 wealthiest countries in Africa.

Richest Countries In Africa (GDP Per Capita) in 2023

This list is based on Gross Domestic Product of these African countries,

On that note, this brings us to the end of this article about The 10 Richest Countries In Africa based on GDP Per Capita in 2023, via Afrokonnect.

Let us know what you think about this list via the comments section below.

Kafui Danku Biography, Movies and Net Worth in 2023

Why Investing in Web Accessibility is A Smart Move In 2023

Untold story of Nigerian Duo – Ajebo Hustlers Net Worth in 2023