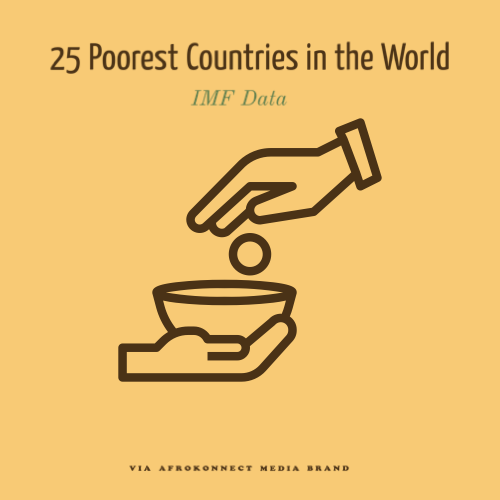 You will soon find out The 25 Poorest Countries In The World in 2023 based on IMF Current Data, via Afrokonnect.

And, the Total GDP are some of the metrics that are used to determine which nations are considered to be the poorest in the world.

The majority of the world’s poorest nations can be found in Africa,

Taking into account both the collective and individual levels of income.

It turns out that Oceania is home to a disproportionate share of the world’s poorest countries, according to indicators of GDP.

Criteria for the Ranking

There are several criteria that can be applied to determine which nations are the poorest in the world.

The criteria that are utilized for the purpose of this endeavor change,

Depending on the international body or the establishment that is in charge of doing the study and ranking.

It is possible to categorize a country’s level of poverty using metrics such as the HDI and GDP.

First, as an illustration, let us consider the categorization that is provided by the United Nations Development Program (UNDP),

Based on the values of a country’s Human Development Index (HDI).

In making its determination, it takes into account the following three characteristics of the population:

Poorest Countries in the World in 2023

To put it another way, the Human Development Index (HDI) is calculated based on health, education, and the average income of a country’s population.

Its values vary from 0 to 1, with 0 being the lowest and 1 being the highest.

If a country’s index is lower than 0.555, then that nation is seen as having a lower level of development.

The International Monetary Fund (IMF) uses a country’s income as a criterion for its classification,

Which is determined by the value of that nation’s gross domestic product (GDP) per capita when adjusted for purchasing power parity (PPP) (PPC).

Product value added per capita is calculated by dividing a country’s total product value by its total population.

You may also be interested in reading: The Richest Countries in Africa.

PPP is a method that was developed to convey the cost of living in a particular country,

As well as to assess the purchasing power of a country by comparing it to the value of a single currency, which is the dollar.

This calculation is also carried out by the World Bank,

Which likewise makes its enormous database accessible to the general public.

Gross domestic product can be used to categorize countries in much the same way as per capita GDP can.

Nevertheless, this statistic has certain shortcomings because it does not take into account the unequal distribution of wealth among the people.

As a result, it is not an expression of the phenomena of social inequality,

But rather the scope of the national economy.

The United Nations (UN) and the Oxford Poverty and Human Development Initiative both state that poverty cannot be reduced to a single concept due to the many facets it encompasses (OPHI).

Which is the part of the concept of poverty that is most frequently brought up in conversation is only one of the aspects that contribute to the problem.

The following components contribute to poverty:

United Nations (UN) identifies discrimination, social exclusion, and a lack of involvement in decision-making as additional factors that might characterize poverty in a social group.

You may also be interested in reading: The 10 World’s Wealthiest Countries based on GDP Per Capita.

The poverty line, which is measured in terms of monetary value and is established by the World Bank,

Consists of a minimal daily value below which an individual is unable to meet his or her most fundamental needs.

Which nations have the lowest standard of living across the world in 2023?

Here is a list of the 25 countries throughout the world that have been determined to have the lowest standard of living,

By applying the various standards discussed in the previous section.

Before we proceed you may want to consider reading the cheapest countries to live in Europe.

The data below was recorded by the International Monetary Fund;

A nation’s nominal gross domestic product is yet another metric that can be used to evaluate its level of wealth.

The gross domestic product (GDP) nominal figure is an expression of the monetary value of all of the products and services generated by a nation over a given period of time; typically, one year.

As a consequence of this fact, the population of the country plays a significant part in this scenario. 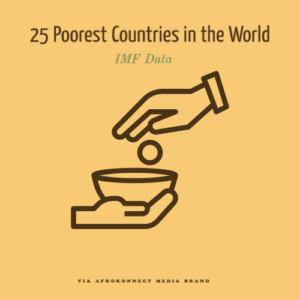 The data below was recorded by the International Monetary Fund.

Poorest Countries In The World 2023

You have been provided with a list of the poorest countries in the world;

We would appreciate it if you would click the share button so that you may encourage us.

You are also welcome to make use of the comment box so that you can contribute to this article.

On that note, this brings us to the end of this article about The 25 Poorest Countries In The World in 2023 based on IMF Current Data, via Afrokonnect

How to Sign up and Fund CBN eNaira Wallet