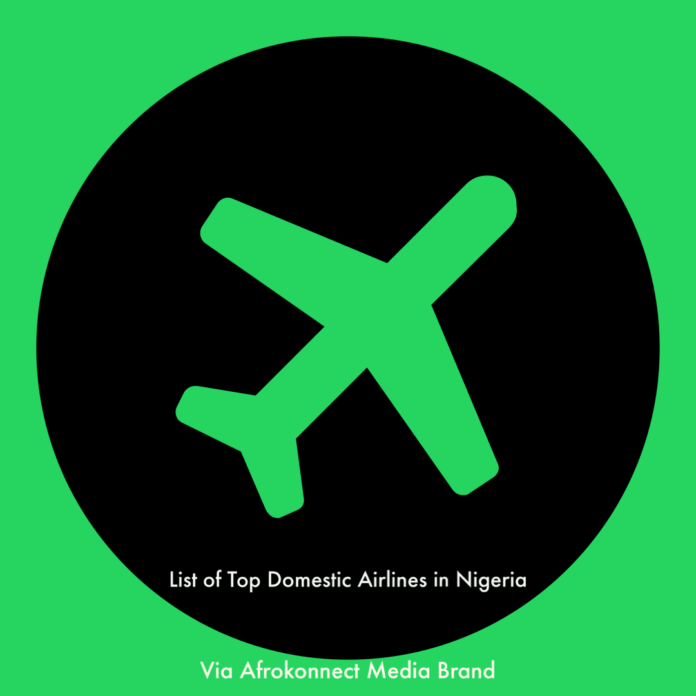 Welcome to this article about list of Domestic Airlines in Nigeria via Afrokonnect.

Local airlines that engage in aircraft operations and carry people, freight, or mail for compensation or hiring are referred to as domestic airlines.

Nigeria Civil Aviation Authority is in charge of regulating and overseeing the country’s domestic carriers (NCAA).

There are a number of quality assurance tests that need to be carried out in order for any airline to be permitted to do business in Nigeria.

This is done to maintain the sector’s reputation for safety and reliability.

The following is a list of domestic airlines that are currently active in Nigeria:

Allen Onyema, a lawyer and businessman, launched Air Peace in 2013 as a domestic airline that is privately owned and operated.

The airline flies to a variety of locations in Nigeria and other parts of Africa.

Only eight of the twenty-eight aircraft in Air Peace’s fleet are currently in service.

The remaining aircraft are scheduled to undergo maintenance,

Ikeja, in the state of Lagos, is home to the Murtala Muhammed International Airport,

Which is also where the headquarters of Air Peace can be found.

Founded in 1998 with the purpose of providing air cargo services,

The company operates both scheduled and chartered operations inside Nigeria and beyond the African Continent.

Murtala Muhammed Airport in Ikeja, which is located in Lagos State, serves as the organization’s primary hub.

Accra, Freetown, Monrovia, Entebbe, and Malabor are among the cities that are serviced by the airline on a regular basis during their scheduled flights.

Liege is a location that is visited often during operations.

Val Tongo is now serving in the role of Chief Executive Officer (CEO) of Allied Air.

Besides serving local routes inside Nigeria,

Arik Air also connects passengers to a wide variety of locations around the continent of Africa.

And the Nnamdi Azikiwe International Airport in Abuja serve as main hubs for the airline’s operations.

Both airports are located in Nigeria.

The company’s fleet now consists of around twenty-one aircraft,

However, not all of those aircraft are currently in use.

Because of the airline’s overwhelming debts and precarious financial situation,

The Asset Management Corporation of Nigeria (AMCON) took ownership of the company in the year 2017.

In the beginning, Schreiner Airways B. V. of the Netherlands was the legal owner of Aero Contractors in Nigeria,

Even though the company was formally established in Nigeria.

There were a number of stockholders in the airline from 1973 until 2004,

Including Schrenier Airways B.V., which eventually sold its shares of 40% of the firm to CHC Helicopter (CHC),

And the renowned Ibru family, who owned 60% of the business.

After CHC sold its holdings in the firm on July 1, 2010, the Ibru family had acquired full control of the business by the following year (2010).

The Asset Management Corporation of Nigeria stepped in and took control of the oversight of the carrier following a severe industrial action that took place in 2013.

The action caused the company’s flight operations to be halted for a period of eighteen days,

Which resulted in a significant amount of financial loss.

As a result of this action, the Asset Management Corporation of Nigeria (AMCON) now owns sixty percent of the shares,

While the Ibru family continues to have interest in the remaining forty percent.

Abuja, Asaba, Benin City, Calabar, Owerri, Port Harcourt, Uyo, and Sokoto are among of the domestic locations that are serviced by the airline on a regular basis.

Azman Air is a Nigerian domestic airline that was founded in 2010 by Addulmunaf Yunusa Sarina.

In 2014, it started regularly scheduled operations.

Abuja, Asaba, Benin City, Birnin Kebbi, Gombe, Kaduna, Kano, Lagos, Maiduguri, Owerri, Port Harcourt, and Dakar, Senegal are some of the cities that are included in the network that this airline serves.

The Mallam Aminu Kano International Airport serves as the primary hub from which Azman Air Services’s operations are conducted.

This is a local airline that provides scheduled aircraft services to the following locations in Nigeria:

Other cities served include Port Harcourt and Uyo.

The Old Kaduna Airport has served as the location of this airline’s headquarters since it began operations in 1979.

However, this airline does participate in charter service operations inside the nation rather than operating regularly scheduled flights.

A portion of the services that Dornier Aviation provides includes flying for agricultural purposes, aerial photography, and providing assistance for emergency medical evacuation.

The services provided by the airline are carried out by a fleet of five Dornier 328-100 aircraft.

Despite being created in June 2015, operations didn’t begin until August 12, 2021 for this brand new airline.

Green Africa Airways’ primary hub of operations is located at the Murtala Muhammed International Airport in Ikeja, which is located in Lagos State.

However, orders have been placed for a total of one hundred and fifty Boeing 737 Max 8 aircraft and fifty Airbus A220-300 aircraft.

This airline is a domestic carrier that is owned and operated by the Akwa Ibom State Government as a state-owned enterprise.

There are a total of seven planes in the airline’s fleet, including two Airbus A220 and five Bombardier CRJ 900 models.

Ibom Air’s administrative offices and main hub of operations are located at the Victor Attah International Airport in Uyo,

Which is located in the capital state of Akwa Ibom.

Since its founding in 2008, Max Air has grown to include regional as well as international flight services among its offerings.

And even Yola are some of the cities that are part of the network of domestic destinations.

Additionally included in the airline’s international destination network are the cities of Medina and Jeddah.

The Mallam Aminu Kano International Airport in the state of Kano, Nigeria is home to the headquarters of the Max Air airline.

Airlines that fly domestically within Nigeria

Established in 2002, this airline has come a long way from its humble beginnings.

Their operational hub and headquarters is located at the Murtala Muhammed International Airport in Ikeja,

While the Nnamdi Azikiwe International Airport serves as another hub.

Overland Airways operates aircraft models such as the Beechcraft 1900D, the ATR 42, and the ATR 72.

A private airline that was established in 2020 as a subsidiary of Private Airlines Services Limited, this airline is now in operation.

As the Executive Chairman of the Airline, Obiorah Okonkwo is now in charge of the company’s operations.

It started its formal operations in 2021, providing service to Abuja, Enugu, Owerri, Lagos, and Port Harcourt, among other locations.

Enugu International Airport is used as the primary location for base operations.

The airport is serviced by four Embraer ERJ-145LR jets, each of which can accommodate fifty passengers.

On December 31, 1999, West Link Airlines was established as a limited liability corporation and given the status of private.

The recapitalization of West Link in accordance with the direction of the Federal Government did not take place until 2010,

And the company did not get its air transport license until April of that year.

In July of 2010, West Link Airlines was awarded an Air Operator License,

Three years later, in May 2013, the airline was given certification.

The airline offers a variety of charter services,

Caltain Ibrahim Mshelia is not only the creator of the company but also serves as its CEO. 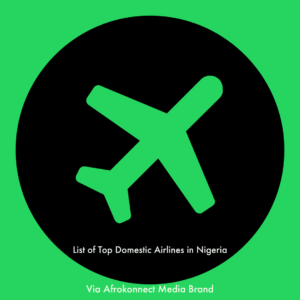 How many domestic airlines are in Nigeria?

Nigeria is home to twenty (20) airports in addition to a large number of regulated airstrips and heliports.

The country also has 23 domestic airlines that are currently in operation,

As you can see, we have different world class domestic airlines in Nigeria,

You can check out these Top 5 Best Airlines in Nigeria, Sites to book flight and how to Book Flight Online.

Why Investing in Web Accessibility is A Smart Move In 2022

Wizkid and Davido Net Worth in 2022