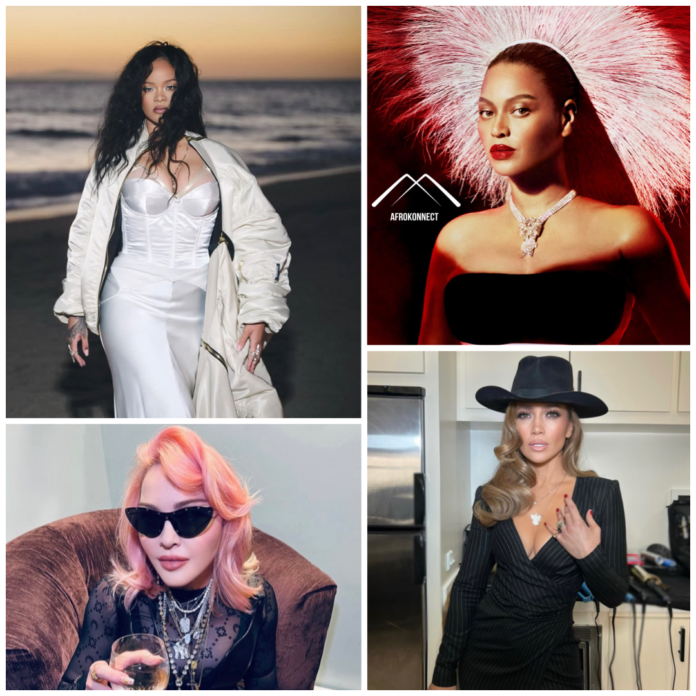 Welcome to this post about the top 20 wealthiest and Richest Female Musicians in the World, 2023 Latest Forbes Ranking list via Afrokonnect.

We will recap the most financially successful female artists in the world,

There are now far more well-off female artists in the globe than there were before.

It has been hypothesized that during the next five years, there will be an increase in the number of female artists who are each worth at least one billion dollars.

As more female musicians break into the mainstream, more and more opportunities avails.

Without further ado, The world’s highest-paid female musicians and singers can be found below.

Fenty Robyn Rihanna is a name that is used and popularized by Rihanna also known as Bad Girl Riri, who is a singer, actress, and businesswoman from Barbados.

Rihanna was discovered by American record producer Evan Rogers, who invited her to the United States to record demo tapes after hearing her perform at an audition.

She was born in Saint Michael and raised in Bridgetown, Barbados.

Rihanna cemented her reputation as a sex icon in the music industry with the release of her third studio album, Good Girl Gone Bad (2007),

Which featured elements of dance-pop music and established Rihanna’s status as an artist.

Rihanna rose to international prominence and won her first Grammy Award thanks to the success of her single “Umbrella,” which topped the charts around the world.

Afterwards Rihanna went on to become the most financially successful female artist in the history of the globe.

Her wealth is estimated to be over $1.8 billion dollars, marking Rihanna is one of the most successful artists in the history of the music industry.

She is an American singer, songwriter, multi-instrumentalist, actor, author, entrepreneur, and philanthropist, although she is most well-known for her work in country music.

Her other accomplishments include acting, authorship, and business.

Awards from the Recording Industry Association of America (RIAA), including gold, platinum, and multi-platinum certifications, have been bestowed to Dolly Parton’s songs.

It is a record for a female performer, and she shares this record with Reba McEntire.

She has had 25 singles hit the top spot on the Billboard country music charts.

She holds the record for most Top 10 country albums in a career with 44, and she has a total of 110 songs that have charted over her career over the last 40 years.

Dolly Parton comes in at the second place and has a net worth that is likewise estimated to be $700 million.

This brings Dolly Parton into the conversation of world’s m wealthiest female musicians in terms of their wealth.

Wealthiest and Richest Female Musicians in the World

She is often referred to be the queen of pop. In addition to this, she is well-known for breaking new ground in terms of creative expression within the realm of commercial music,

While simultaneously retaining full control over every facet of her career.

Critical praise as well as controversy have been produced as a result of her writings,

Which explore a variety of topics including social, political, sexual, and religious issues.

Other musicians often name Madonna as one of their primary influences.

Madonna comes in at number three on the list with a whopping $600 million in net worth.

Here’s additional information regarding the  richest music producers in the World and how much they make.

A Cuban-American singer, composer, actor, and entrepreneur, Gloria Estefan was born in the United States.

Estefan was awarded an MTV Video Music Award, the American Music Award for Lifetime Achievement, and was given the BMI Songwriter of the Year award.

In addition, she was recognized with the Grammy Lifetime Achievement Award.

She has been recognized with many Billboard Awards in addition to being inducted into the Songwriters Hall of Fame.

Both VH1 and Billboard have ranked her among the Top 100 Greatest Artists of All Time, and she is one of those artists.

Richard Blanco, who was the Presidential Inaugural Poet in 2013 and is the author of “How to Love a Country,”

Told the Boston Globe that Gloria Estefan is one of the Latin singers who helped him to “ground in the musical poetry of my culture and rejuvenate my spirits.”

Gloria Estefan is very much respected among her peers and she has an estimated net worth of $500 million.

Céline Marie Claudette Dion is a Canadian singer who is of Quebecois descent.

She is revered for her commanding and technically proficient vocals, and she is now the best-selling recording artist in Canada.

She is also one of the best-selling musicians of all time, with record sales of over 200 million copies throughout the globe.

Céline Marie Claudette Dion is now ranked among the top five wealthiest female artists in the whole world with an estimated net worth of $500 Million.

Wealthiest female musicians in the world

Eilleen “Shania” Twain is a well-known name in the music industry in Canada.

She is the best-selling female singer in the history of country music,

And, she is also among the best-selling music artists of all time, thanks to the fact that she has sold over 100 million recordings.

Her accomplishments led to the bestowal of various honorific titles, one of which was “Queen of Country Pop.”

Despite the fact that Billboard ranked her as the most successful country-pop crossover artist of the ’90s.

The world’s top 20 female musicians in terms of their wealth can be complete without her,

Largely because Shania Twain has an incredible estimated net worth of over $450 million.

Her full name is Victoria Caroline Beckham. She gained widespread recognition in the 1990s as a member of the girl group the Spice Girls, at which time she was known by her stage moniker, Posh Spice.

Over 90 million recordings have been sold all over the globe by Victoria Beckham, she also has an estimated net worth of over over $450 million.

Beyoncé Giselle Knowles-Carter is a musician, songwriter, and actress based in the United States.

According to NPR, Beyoncé is the most influential female musician of the 21st century due to the boundary-pushing artistry and vocals that she has utilized throughout her career.

As a result of her achievements, she is now recognized as a cultural icon and is sometimes referred to as “Queen Bey.”

Beyoncé was born on the September 4, 1981. As a young girl, Beyoncé participated in a number of contests involving singing and dancing.

She first came to prominence in the late 1990s as a member of the R&B girl group Destiny’s Child,

Which is widely regarded as one of the most commercially successful girl groups of all time.

During the time that they were apart, she released her debut album, Dangerously in Love, in 2003.

Beyoncé went on to become one of the richest women in the music industry with an estimated net worth of $500 million.

Wealthiest and Richest Female Musicians in the World 2023

She has had a successful career spanning over six decades, and she has achieved success in multiple fields of entertainment.

She is one of the few performers to have been awarded an Emmy, Grammy, Oscar, and Tony.

In the early 1960s, Streisand kicked off her career by giving performances in nightclubs and theaters on Broadway.

After making guest appearances on a number of different television shows,

She signed with Columbia Records and demanded that she be allowed to maintain complete artistic control in exchange for lower pay.

This was an arrangement that she maintained throughout the entirety of her career,

Streisand holds the record for most number of albums by a female artist to debut at number one on the US Billboard 200 chart.

She has achieved this feat 11 times over the course of her recording career,

As well as becoming one of the wealthiest female musicians in the world with an estimated net worth of $400 million.

J.Lo is the stage name of American singer, actress, and dancer Jennifer Lynn Affleck, who is also known Jennifer Lopez or simply as J.Lo.

She began making appearances as a Fly Girl dancer on the sketch comedy television series in Living Color in 1991,

After releasing her “On the 6,” in 1999, which was instrumental in advancing the Latin pop movement in American music,

Jennifer Lopez began her career in the music industry professionally with the release of her debut studio album (2000).

She was the first woman to have a number-one album and film in the same week,

When she released her second studio album “J.Lo” and her romantic comedy “The Wedding Planner” in the same week in 2001.

J.Lo became the first woman to accomplish this feat and she’s currently among the most successful women in Music Industry with an estimated net worth of $400 million. 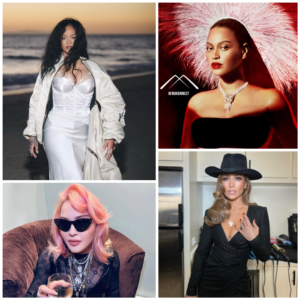 Conclusion on Richest and Most Successful Female Music Artists in the world;

Numerous women in the music industry have broken new ground and left lasting impressions both on and offstage, and this is a boon for the entire industry.

These musician’s influence and wealth have spread far beyond the music industry.

We have compiled the top 10 wealthiest female singers in the world in 2023 to honor them.

Rihanna has the largest fortune of any female singer, an estimated $1.8 billion.

The singer made a lot of money off of her cosmetics line, Fenty Beauty, and her lingerie line, Savage x Fenty.

She is also one of the best-selling musicians of all time, with over 250 million records sold around the world,

Making her one of the highest-paid celebrities of the last and present decade.

On that note, this brings us to the end of this publication about the top 20 Richest Female Musicians in the World for 2023 Forbes Ranking list via Afrokonnect.

Let us know what you think via the comments section and don’t forget to share this post.

Nomcebo Zikode Net Worth in 2023, Biography, Background Information and Career

Stefflon Don Net Worth in 2023, Biography and Relationships