The post is about FireBoy Dml Net Worth in 2023, his music career and Biography via Afrokonnect.

If you’ll like to know some interesting facts about the exciting young Nigerian singer called FireBoy Dml then read on.

Nigerian music industry is one the fastest growing industry in Africa,

With the likes of Zinoleesky, Lyta, Poco Lee, Joeboy, Bella Shmurda, Rema and a lot more talents out there,

We’re certain that the future of Nigerian music is in safe hands.

Fireboy DML and these other fast growing artistes are good example, Now back to Fireboy DML.

Fireboy DML Biography, Net Worth in 2023, Education And Career

FireBoy Dml was born on February 5, 1996, in Abeokuta, Ogun State part of Nigeria.

Where he completed his primary and secondary school education,

After completing his secondary school education in Ogun State,

FireBoy relocated to Osun State, where he gained admission into the famous Obafemi Awolowo University Ile_Ife,

Most people don’t know FireBoy went on to secure a bachelors degree in English Language from same university before moving to Lagos.

Fireboy DML Music Career and Net Worth in 2023

While in school FireBoy developed an interest for music right there on campus,

He was already making music and going to few shows on campus, the passion and talent has always been there.

According to Fireboy DML he describes his sound as “Afro-Life” and said he writes songs that his audiences can relate to.

He added that most of his inspiration are from things that happen around him and his environment.

In short time he become popular and known by almost all students on campus.

In October 2018 Fireboy DML singed a record deal with Olamide into YBNL Nation,

A record label owned and managed by Olamide.

Olamide confirmed the signing in a welcome note which he posted on his Instagram handle in late 2018.

Some fans believed Fireboy was signed to YBNL with the aim of replacing Adekunle Gold who departed the label after releasing his debut album titled “Life“.

The song also made it to his debut album “Laughter, Tears and Goosebumps” released in 2019. 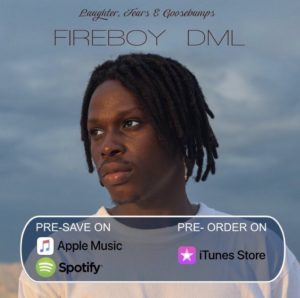 The song became a hit almost immediately and became widely accepted by Nigerians and globally.

Afterwards, Fireboy has went on countless shows within and outside Nigeria, he also Performed in London alongside Wizkid in his Starboy Fest.

Fireboy didn’t need any international collaboration to make his album go viral in days and it was topping charts in European Competitions.

After the Success of his Album “Laugher, Tears and Goosebumps” in 2019,

Before FireBoy joined YBNL he was an independent artist, Olamide discovered the young talent and gave him the platform.

In October 2018 Fireboy DML and Olamide reach an agreement and he was Signed into YBNL Nation, owned and managed by Olamide.

After releasing His debut studio album“Laughter, Tears and Goosebumps” in 2019 under YBNL.

FireBoy won Listener’s Choice and was nominated for Song of the Year for “Jealous” at the 2020 Sound City MVP awards festival.

In an interview with Channels Tv, FireBoy said he wanted to blow all by himself before Olamide met him and help,

From our research FireBoy is not married or in any open relationship yet,

In one of his interviews he once mentioned that his song “jealous” was inspired when he was thinking about his self addicted girlfriend who he never mention her name.

Following a series of research, we estimated FireBoy Dml Net Worth at $550,000.

The above includes his digital streaming royalties, Performance fee and endorsement deals.

We are expecting this figure to rise pretty quickly because of the rate at which FireBoy moving.

Who is fireboy DML?

He rose to prominence after signing a record deal with YBNL and also releasing his hit single Jealous with the imprint.

On that note, this brings us to the end of this article about Damola aka fireboy.

Let us know what you think about the post via the comments section below.

Nengi Biography, Net worth in 2023, Relationship and Endorsements

Ray Emodi Biography, Movie Career and net worth in 2023