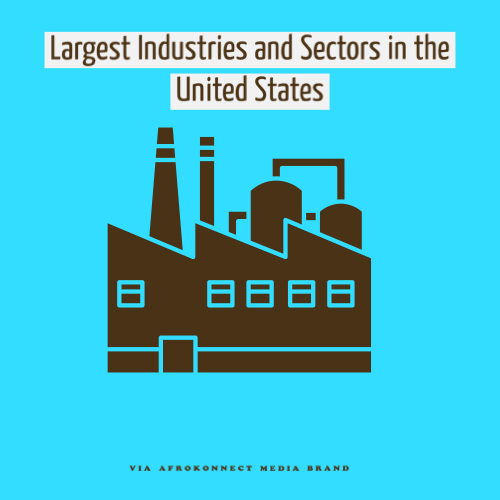 This post contains information about the top 10 Largest and Biggest Industries In The United States in 2023, via Afrokonnect.

Do you want to learn more about the most important economic sectors in the United States?

The United States of America is a leading economic power on a global scale,

This represents 22% of the total nominal GDP on a global scale.

The agricultural sector, manufacturing sector, and the service sector are the three primary components that make up the economy of the United States.

As a result of the significant part that many different businesses play in maintaining the stability of the economy of the United States,

Some of these industries have succeeded exceptionally well in comparison to others,

Which brings us to the topic that we will be discussing today.

Top 10 Largest industries in the United States in 2023

The real estate, rental, and leasing industries combine to form the most significant portion of the economy in the United States.

With a value-added contribution to GDP of $1.898 trillion, this industry accounts for 13% of the total GDP.

The real estate industry makes a contribution to the economy on two fronts:

Which occurs when rent is paid and when payment is made for household services.

The real estate industry, sometimes known as the housing sector plays a crucial part in the United States economy.

This was made abundantly clear during the worst economic slump in recent American history,

Which was precipitated by a nationwide drop in home values in 2008.

Fortunately, we have written everything you need to know about How To Start Your Own Real Estate Business.

The combined GDP added value of state and local governments is $1.336 trillion,

Making them the second-largest contributor to GDP and accounting for 9% of the total GDP of the United States.

Spending by the government on initiatives that will yield advantages in the future or over the long term is an example of government investment.

Other examples include expenditure on research and spending on infrastructure.

On the other hand, government final consumption refers to the amount of money the government spends on goods for its own direct consumption.

The majority of the time, national and international taxes as well as loans are used to pay state and local government spending.

There are four major sub-industries that make up the Finance and Insurance industry.

These sub-industries are commodity and securities contracts, credit brokerage and banks affiliated with the Federal Reserve, insurance companies, and trusts, funds, and other financial vehicles.

The expansion of the finance and insurance business is very important to the economy of the United States,

Since it helps to make exports from the United States possible.

It is also estimated that the sector is directly responsible for the employment of more than 5 million individuals in the United States,

Which is comparable to 4% of the total employment in the country.

You might want to check out the Best Homeowners Insurance Companies in Texas,

As well as Top 10 Best Auto Insurance Companies in USA.

A whopping $1,136 billion, or 8% of the country’s GDP, comes from the Health and Social Care sector.

Particularly important to the success of both industries was the provision of medical care,

With the United States spending the most money per person on medical care of any country in the world at $8,608.

Because of the increase in the prevalence of non-communicable diseases including cancer and obesity,

The United States government has had to spend more money on curative, rehabilitative, and preventive treatment.

The creation of durable goods, such as computers, automobiles, weapons, sporting equipment, home appliances, and airplanes,

The added value of the GDP contributed by the durable manufacturing industry in the United States is $910 billion,

Which is equivalent to 6% of the total GDP for the country.

Extreme fluctuations in the sector are caused by both domestic and global causes,

Such as the price of oil and the value of the dollar on global financial markets.

The United States economy as a whole benefits greatly from the employment opportunities provided by durable manufacturing.

It is estimated that the retail industry in the United States contributes $905 billion to the overall value of the GDP, which is equal to 6% of the total GDP.

The retail process, the last step in the supply chain before products reach the consumer, is included in this sector of the economy.

Consumers who are purchasing items for their homes or for their own consumption typically remain walk-in customers at fixed shop retailers, which are found in the retail industry.

Ten percent of all jobs in the United States may be traced back to the retail business,

Making it the largest employer in the country of USA,

According to statistics provided by the National Retail Federation,

The retail sector is responsible for the direct or indirect employment of more than 15 million people.

The term “wholesale trade” refers to the process by which producers send large quantities of their wares to either retailers or bulk consumers,

Such as institutions, businesses and other wholesalers.

In contrast to retailers, wholesalers do not invest in broad-based consumer promotion and typically do not house their own inventory.

Notably, they are not intended to accommodate walk-in customers,

It is estimated that the value added to the GDP by the wholesale industry in the United States is $845 billion,

Which is comparable to 6% of the entire GDP.

More than 5.7 million individuals, or 4% of the overall workforce in the United States are employed by the industry, making it a significant employer.

Nondurable products can be defined as any products that have a useful life of less than three years.

Examples of nondurable products include fuel, electricity, and clothing, amongst other things.

The nondurable manufacturing business is responsible for the creation of nondurable products.

Production of non-durable goods is an essential component of the economy of the United States.

This sector contributes an additional $821 billion to the GDP annually, which is equivalent to 6% of the total GDP.

Whereas the durable manufacturing sector only accounts for 349,000 jobs.

Despite the fact that the nondurable manufacturing sector produces less value,

It employs considerably more people than the durable manufacturing sector.

The United States Federal Government now holds the ninth spot on the list with an added value of the GDP of $658 billion.

This figure accounts for 5% of the total GDP. It is estimated that around 2.795 million people in the United States are employed by the federal government,

Making it one of the most important employers in the economy.

The highest portion of annual investments made by the federal government is allocated to education,

Followed by social security and then health care, each of which accounts for 25% of those annual investments. 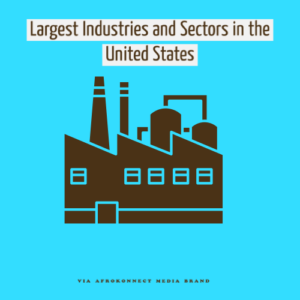 Are all part of the broader “information industry,” which produces, transmits, processes, stores, and sells data and knowledge.

The information business is an essential component of the economy of the United States,

It contributes an additional $646 billion or 4% of the total GDP to the country’s gross domestic product (GDP).

It is estimated that roughly 2.7 million jobs are supported by this industry,

Which accounts for approximately 2% of the entire workforce in the United States.

Largest and Biggest Industries In The United States 2023

If you think that the article about the “biggest industries in the United States” is helpful,

Then please click the buttons to share it on social media and also make use of the comment box so that you may contribute your thoughts.

On that note, this brings us to the end of this post about the top 10 Largest and Biggest Industries In The United States in 2023, via Afrokonnect.

The Altè music and how the Altè fashion is taking over