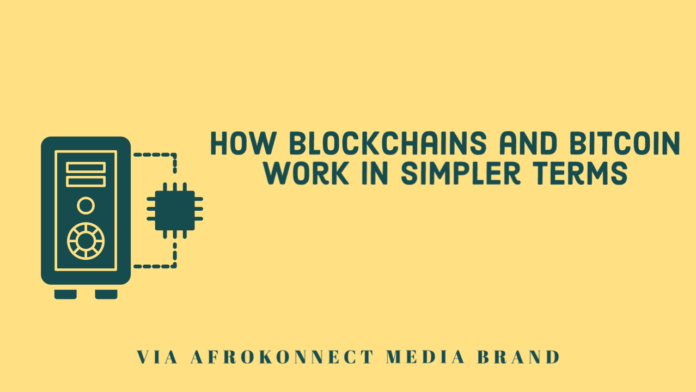 Welcome to this article about How Blockchains and Bitcoin Work in Simpler Terms via Afrokonnect.

Blockchain is one of the most advanced technologies out there.

It has been associated with cryptocurrencies for a long time but has many other applications, including encryption and security.

However, its correlation with Bitcoin has been the most evident, but many people fail to understand how blockchain and Bitcoin work.

If you are interested in bitcoin trading you may also visit a website that may help you trade with ease. So, with this article, we are shedding light on their working principle!

Bitcoin is a well-known digital currency and has been operating for over a decade now, and that too, without any regulatory authority or central control.

There hasn’t been an oversight of governments and banks.

Instead, blockchain depends on cryptography and peer-to-peer software.

A public ledger is utilized for recording Bitcoin transactions.

This public ledger also copies the transactions and stores them on the servers which have been installed around the globe.

Fortunately, setting up a server is quite convenient as you only need a spare computer, which is known as a node.

Also, the information about who owns which digital currency can be accessed through the nodes cryptographically and doesn’t rely on any central authority.

The transactions are broadcasted publicly to a network and are transmitted from one node to another.

– this group is known as a block, which is permanently integrated into the blockchain. This is the basic principle of how Bitcoin operates.

Wallets can be accessed from the client software or other hardware and digital tools.

As for now, Bitcoin is subdivided into seven decimal points.

The thousandth of a Bitcoin is called a milli, while the hundred millionth is known as a satoshi.

As far as the owner is concerned, a private key is utilized to prove the fund’s ownership.

The Bitcoin owner can memorize the private key to access and spend the digital currency – this concept is often termed a brain wallet.

Many people wonder if Bitcoin can be converted into cash,

So yes, it can be exchanged for cash like other assets, and there are various exchanges that allow users to exchange it for cash.

However, the transactions can also be physical, and many businesses have started accepting Bitcoin as a mode of payment.

In the beginning, Bitcoin was launched as a way for people to send money over the internet,

And was made to be an alternative payment system that would operate without any centralized control.

Blockchain is a well-known technology used for record-keeping purposes

– it has been designed to make sure the system cannot be hacked, or the data cannot be forged.

For this reason, blockchain is immutable and secure.

It is considered a form of DLT (distributed ledger technology),

Which is a well-known digital system to record transactions and relative data in different places at once.

Every computer in the blockchain network tends to maintain a copy of a ledger to prevent failure.

In addition, the copies are validated and updated simultaneously.

It wouldn’t be wrong to say that blockchain is a database that varies from traditional databases in how information is stored and managed.

For instance, traditional databases store information in the form of files, tables, rows, and columns, while blockchain stores the data in the form of blocks.

The blocks are connected digitally and work as a decentralized database

– it is managed by the computers that belong to a peer-to-peer network rather than a central computer.

Dissecting The Connection Between Blockchain & Bitcoin

For this reason, blockchain has been associated with digital currencies, including Bitcoin.

However, blockchain applications have significantly expanded ever since the inception of Bitcoin.

How Blockchains and Bitcoin Work 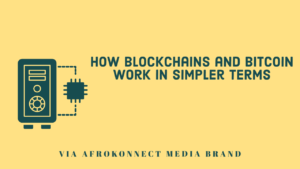 Blockchain and Bitcoin have been lumped together frequently, and many people use them interchangeably.

However, blockchain is a technology that develops the decentralized ledger,

While Bitcoin is a digital currency that depends on blockchain to operate.

So, this is how both these entities work and actually depend on each other to a significant extent!

HOW TO GET YOUR NIGERIAN NATIONAL ID CARD (NIMC) ONLINE