We are confident you have checked their benefits if you have been researching cryptocurrency or only Bitcoin.

It’s already pretty clear that cryptocurrency is decentralized, unlike other traditional currencies.

In addition, one of the most promising benefits of cryptocurrency is that it cannot be manipulated or controlled by any government entity. There are lots of articles online that talk about government and cryptos, also, one interesting topic is how bitcoin impacts the construction industry.

For this reason, many people have started wondering if other cryptocurrencies can be regulated by the government or not.

In addition, it’s common for people to wonder if government authorities can restrict access to cryptocurrencies, irrespective of the reasons.

Some of these reasons include tax evasion, theft, and bankruptcy.

For instance, one could lose their cryptocurrency if the government realizes that it was acquired illegally.

So, with this article, we are sharing how cryptocurrency and government are managed!

For years, countries have strongly preferred to adopt digital currency. However, Bitcoin is still facing resistance from some governments (the resistance might be invisible, but it’s there).

The governments feel that cryptocurrency can limit their control over the transactions and flow of money.

This idea has resulted in rejecting cryptocurrency adoption by different economies or nations.

For instance, most regulatory authorities consider Bitcoin or its technology as a facilitator for different criminal dealings.

These concepts are associated with losing control over Bitcoin. For this reason, it is essential to consider a few things about Bitcoin transactions to determine the government’s power over the cryptocurrency.

Bitcoin is a popular digital currency that can only be used to transact on bitcoin software.

It won’t be possible to withdraw cryptocurrency from a bank, and transferring it from one person to another requires a unique Bitcoin wallet.

Also, no one can access Bitcoin or make transactions other than the cryptocurrency owner.

At this point, it’s pretty clear that the security measures associated with Bitcoin transactions make it nearly impossible for the government or other regulatory authorities to freeze the assets.

The reasons why cryptocurrency cannot be controlled include cutting-edge security and other reasons, such as;

When it comes down to Bitcoin or cryptocurrency transactions, they occur within an encrypted network known as a blockchain.

The only way to access cryptocurrency is by owning a digital wallet. These digital wallets are essential because they have private and public addresses.

In addition, the keys or pins are essential for accessing the account rather than using personal information.

Contrary to traditional currency, printing cryptocurrencies on paper or withdrawing them from a bank or ATM is impossible.

Cryptocurrency can only be transferred through a digital wallet, which is why the government cannot seize or control cryptocurrencies, even after official court orders.

On top of everything, cryptocurrency is decentralized, which means there is no medium or regulatory body taking orders from government authorities.

For this reason, no government can order the seizure of cryptocurrency.

Also, the blockchain tends to distribute digital assets within a network, making it highly challenging for the government to impose any restrictions.

There are some loopholes in digital currency, which means that the government can find a way to regulate cryptocurrencies.

To begin with, the government can tax the fiat money used to cash out the virtual tokens.

It means that specific tokens will be taxed, and the cryptocurrency owner will have the option to purchase a tax-exempted token.

As for now, the cryptocurrency is under SEC jurisdiction, and the IRS might make it subject to capital gains or income tax.

Recently, the SEC has improved the Bitcoin ETF over CBOE, a well-known future.

Other than this, no other futures have been issued or approved, but hundreds of applications have been submitted. 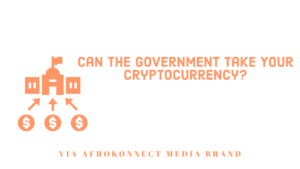 The bottom line is that there are rare chances of the government controlling or manipulating cryptocurrency.

It’s very challenging for governments to regulate these digital currencies because extremely high-end technologies will be needed, which haven’t been created either!

Obi Cubana Biography, Source of wealth and Net Worth

Oxlade Musician Biography and Net Worth